'You couldn't draw it up any better,' says Drake Batherson after NHL debut

Nova Scotia hockey star Drake Batherson scored a goal in his first NHL game on Thursday. It turned out to be the winner as the Ottawa Senators defeated the Detroit Red Wings. 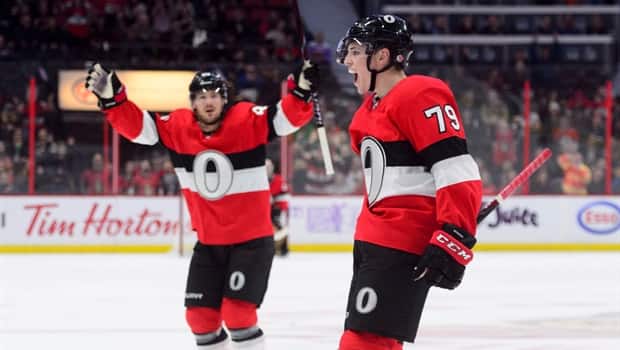 For Nova Scotia's Drake Batherson, his first game in the National Hockey League Thursday couldn't have gone much better.

Batherson, a forward, had the winning goal for the Ottawa Senators in a 2-1 victory at home over the Detroit Red Wings.

He scored on a power play in the second period. It turned out to be the final goal of the game.

A former member of the Valley Wildcats of the Nova Scotia Major Midget Hockey League and Maritime Junior Hockey League and Cape Breton Screaming Eagles of the QMJHL, the 20-year-old Batherson was called up from Ottawa's AHL affiliate in Belleville, Ont., earlier this week.

"You couldn't draw it up any better for a night to happen like this, to score a goal in my first NHL game," Batherson said to reporters in the dressing following the game. "It's something I've dreamed since I was kid."

“It’s something I’ve dreamed of since I was a kid, scoring that first goal and having my whole family here to see it.”<br><br>Drake Batherson speaks to media after scoring his first goal in his first NHL game tonight. <a href="https://t.co/aYhGQOv3ey">pic.twitter.com/aYhGQOv3ey</a>

More than a dozen members of Batherson's family cheered the goal in person with many more friends back home supporting him. "It's a special night, one I'll never forget for sure," he said.

A gold-medal winner with Canada's national junior team in 2017, Batherson earned his promotion to the Senators by scoring 20 points in 14 games in the AHL.

He grew up in the Annapolis Valley after his father, Norm, settled in the area following his pro career in North America and Europe. Norm Batherson, originally from North Sydney, played for the Acadia Axemen, winning a national championship with the team.

Drake Batherson was a fourth-round selection of the Senators in the 2017 draft. Ottawa hosts the Pittsburgh Penguins on Saturday.