Dr. Robert Strang, chief medical officer of health, said there are seven COVID-19 cases that have not been traced back to travel, which is a sign of community spread in Nova Scotia. 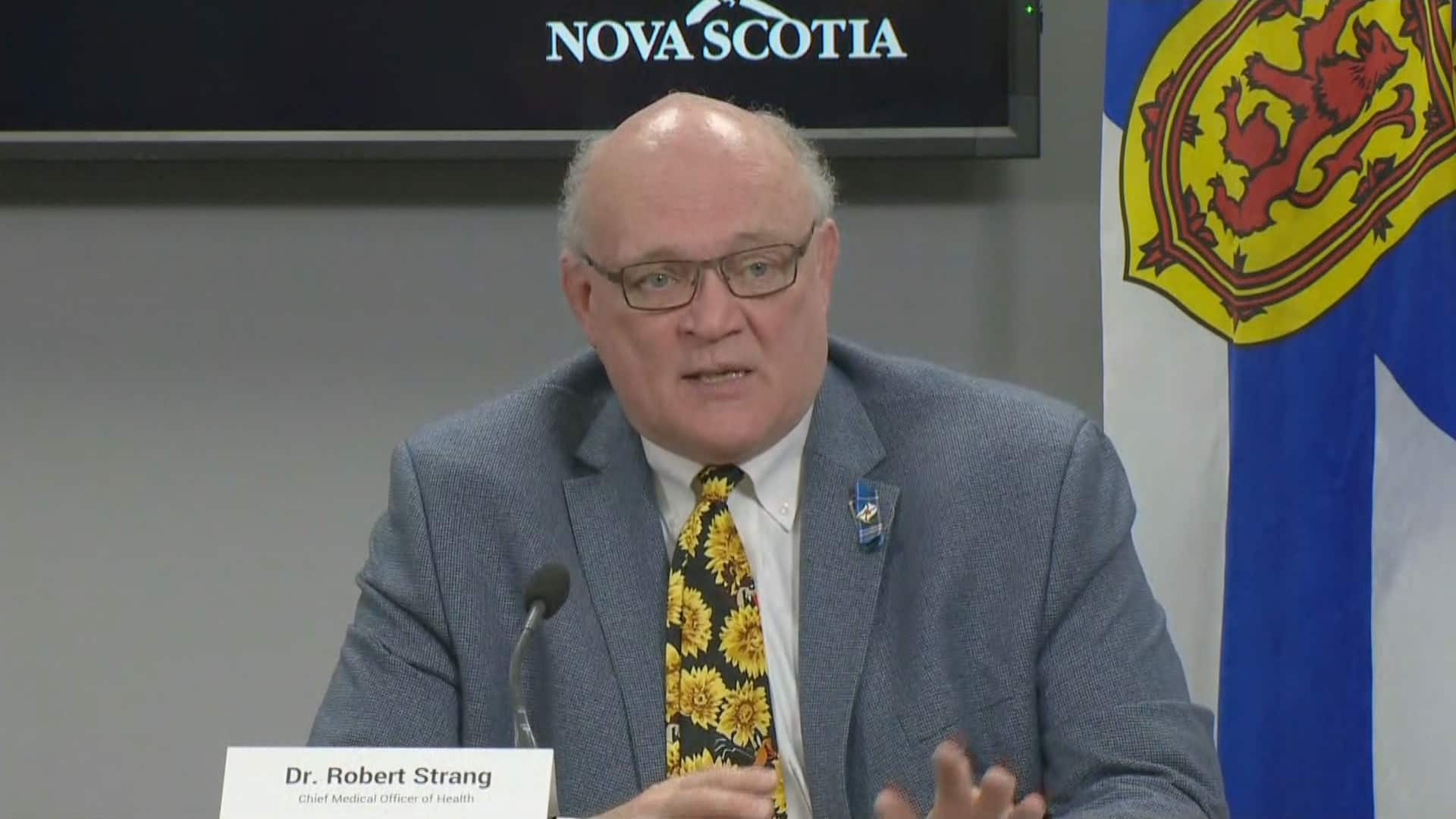 2 months agoVideo
4:28
Nova Scotia is showing signs of community spread as the second wave of COVID-19 is starting to sweep the province. Dr. Robert Strang said there are seven COVID-19 cases that have not been traced back to a source. CBC's Michael Gorman has more. 4:28

Nova Scotia's chief medical officer of health warned the public Tuesday that community spread of COVID-19 has begun, a sure sign the province is being hit with a second wave of the pandemic.

"There are seven cases where we can't identify a source that is directly related to travel," Dr. Robert Strang said during a briefing.

"We have to conclude this may be from local transmission."

The province reported three new cases of COVID-19 on Tuesday, in addition to the two cases related to Dartmouth-area schools that were announced late Monday.

There are now 24 active cases in Nova Scotia.

"People need to understand this ... we will not hesitate, if required, to shut down this economy in sections," he said. "We should all recognize that this virus is next door and believe it is and act accordingly."

Strang reminded Nova Scotians it is highly discouraged to travel outside the Atlantic bubble as the province is on a trajectory of new cases "that can't continue."

In September, the province recorded just three new cases. That number jumped to 21 new cases in October. In the first 17 days of November, 42 new cases were reported.

"We have become complacent and people are tired and this is also making people anxious — all that's understandable, it's normal — but we have to step up," said Strang. "There are many challenges in front of us."

Strang said Nova Scotians must abide by public health measures introduced earlier this year, like frequent handwashing, consistent and proper mask-wearing, physical distancing, following social gathering limits of no more than 10 people, staying home if you are unwell and getting tested when you have more than two symptoms.

The first two cases of COVID-19 in Nova Scotia schools were announced Monday. The cases were identified at Graham Creighton Junior High in Cherry Brook and Auburn Drive High in Cole Harbour.

McNeil said Tuesday both individuals are students. They are self-isolating at home.

"I understand this is very stressful and I get that you are scared. This is the first time COVID has entered our schools," McNeil said. "I want to reassure teachers, students — and most definitely students and parents — we have a plan in place to do our best to protect you."

Strang said the cases are linked to adults who contracted COVID-19 from a workplace. The students attended school without knowing they were infected.

All the individuals who had contact with those students, whether in classrooms or on school buses, have been contacted and advised to self-isolate, said Strang.

They include seven teachers at Graham Creighton Junior High, two teachers at Auburn Drive High and about 55 students.

Doug Hadley, the spokesperson for the Halifax Regional Centre for Education, said attendance at both schools was just under 25 per cent on Tuesday, the day after the cases were announced.

"We appreciate many families decided to keep their children home from school," Hadley said in an email. "It's understandable they would have feelings of uncertainty and concern given the news about a confirmed case of COVID-19 in their school."

The other three new cases announced Tuesday were identified in the Central Zone and are close contacts of previously reported cases.

The new cases were discovered among 966 tests completed at Nova Scotia Health Authority labs on Monday.

No one is currently in hospital with COVID-19.

Meantime, a new potential exposure to COVID-19 was announced in the Dartmouth area.

Anyone who was at GCR Tire & Service Centre at 42 Isnor Dr. on Nov. 13 between 8 a.m. and 10 a.m. is being asked to self-monitor for symptoms, the health authority said in a news release.

It said anyone who was exposed to COVID-19 at that location may develop symptoms up to and including Nov. 27.

The province recently issued a number of potential exposure sites in the Halifax area. A list can be found here.

The latest numbers from around the Atlantic bubble are: