Canada Post's new stamp is honouring black hockey players who competed in the Maritimes with a stamp featuring an illustration of the Halifax Eurekas, the black league champions in 1904.

Players competed in Colored Hockey Championship between 1895 and 1930s 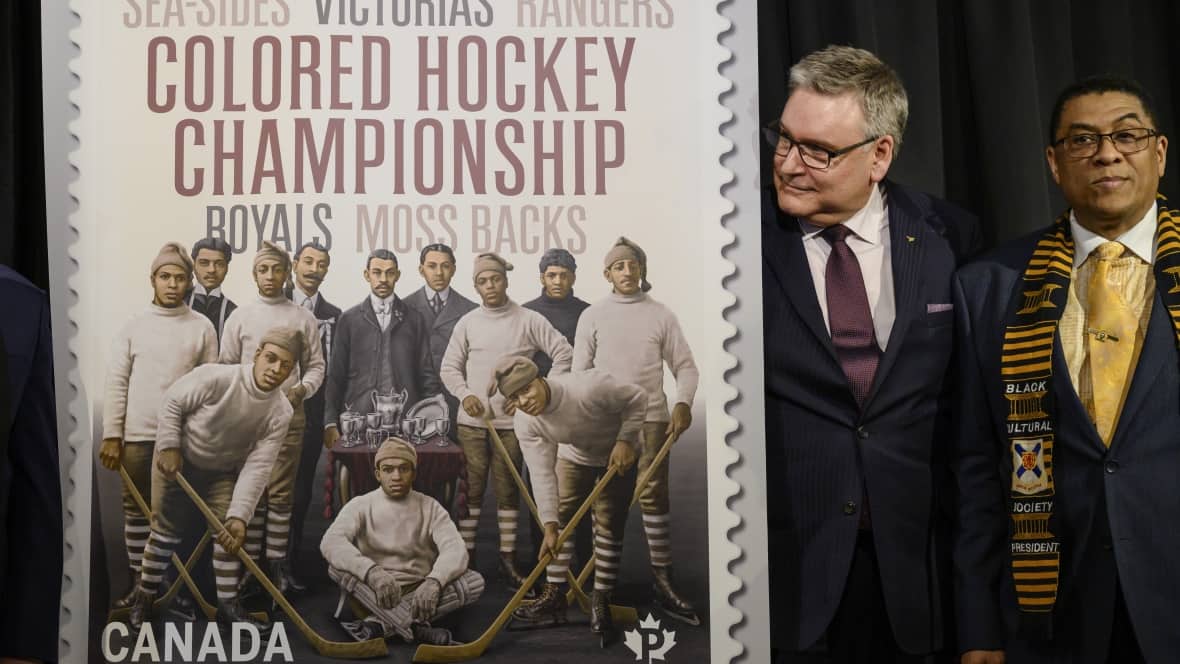 1 year ago
2:15
Canada Post's new stamp is honouring black hockey players who competed in the Maritimes with a stamp featuring an illustration of the Halifax Eurekas, the black league champions in 1904. (Photo credit: Darren Calabrese/Canadian Press ) 2:15

A new stamp highlights black hockey players in the Maritimes whose story was almost buried in history.

But those players pioneered elements of the game and persevered despite not being able to play with their white counterparts.

Canada Post unveiled an image Thursday in Cherry Brook, N.S., of the 1904 Halifax Eurekas, the winners of the Colored Hockey Championship that year.

Former MLA Wayne Adams's grandfather Augustus (Gus) Adams helped form the hockey league in 1895 and played alongside his brother, George, on the team.

Racism was so entrenched that they couldn't share the ice with white players.

"There's a hunk of history in that stamp," Wayne Adams said. "What's being celebrated is some lost, stolen or denied history.

"And I think research over the past 10, 15 years has proven that this is a significant piece of real Canadian history and you can't have it locked away in security vaults at various universities."

People flocked to the Colored Hockey Championship in the early 20th century. At its peak, there were seven Nova Scotia teams and one from Prince Edward Island.

Players used wooden pucks cut from birch trees and would practise in the early mornings on the Bedford Basin or at arenas late at night after white players had finished.

"They were paid the handsome sum of 50 cents a month," said Adams.

Though the league continued into the 1930s, and Adams's father and uncles played, he only learned about the significance of the league in the past decade.

'Never too late to recognize history'

Elizabeth Cooke-Sumbu discovered her grandfather played for the Amherst Royals when the community hosted a black sports award banquet about 10 years ago. She said the players all had descendents in the community, some of whom play hockey.

"Well, it was pretty exciting," she said.

"It's never too late to recognize history. History will always be here so now it's entrenched in the books, in the stamp, people will be able to see that forever. To Canada Post, I say thank you."

Craig Smith, president of the Black Cultural Society, had also never heard about the Colored Hockey Championship until recent years. But his grandfather and great uncles actually played.

Smith said it's important for people know about the league and that black men have contributed to the game for more than 125 years.

"It shows we were a part of building this country — whether it was in the arena, socially or militarily," he said.

He said the league was physical and fast and "paved the way for modern hockey as we see it today."

Smith said newspaper stories from the time described how players like Eddie Martin pioneered the slapshot. Goalies were ahead of their time.

"It was unknown for goaltenders to drop down to stop a puck and yet Henry Franklin — of one of the players in the coloured league — was able to go down and do that as part of his game," he said. "Those kind of innovations that we see today were perfected in that league."

He said it's important to acknowledge the history of black people in Nova Scotia is "steeped in racism."

"You can't look forward without looking back and if we look back you have to look at the more unsavoury times that existed within our history to really appreciate where we are now and also recognize how much work there is still to be done."