A newly released police interrogation video shows Sub-Lt. Jeffrey Paul Delisle, the Halifax naval officer at the centre of an international espionage embarrassment, breaking down and sobbing once it was revealed police knew he was selling top-secret documents to Russia. 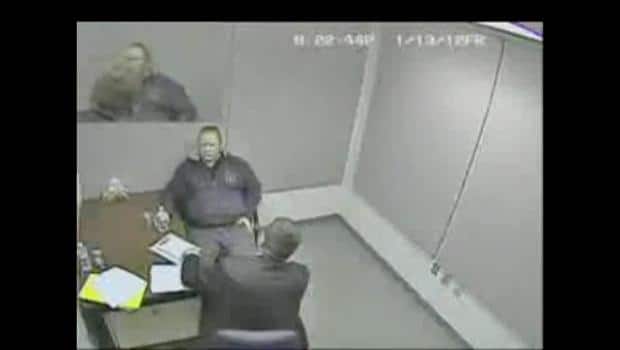 8 years ago
5:40
Watch excerpts from the interrogation of confessed navy spy Jeffrey Delisle. 5:40

A newly released police interrogation video shows Sub-Lt. Jeffrey Paul Delisle, the Halifax naval officer at the centre of an international espionage embarrassment, breaking down once it was revealed police knew he was selling top-secret documents to Russia.

Delisle, 41, pleaded guilty in October to one count of breach of trust and two counts of passing information to a foreign entity that could harm Canada's interests.

CBC had previously obtained court documents, including the transcript of the police video. The footage was a court exhibit during Delisle's two-day sentencing hearing but was never played.

"I've been so dead, so dead inside," Delisle said in the Jan. 13, 2012 video. He attributed his actions, in part, to the breakdown of his marriage.

"The pain of her betrayal and the pain she put my children through killed me."

Delisle's ex-wife, Jennifer Delisle, said she's baffled somebody could betray their country because their marriage failed.

In the video, Delisle said his spying was akin to "professional suicide."

On the last day of his sentencing hearing Delisle apologized to his family.

"I love them very much. I'm sorry for the hurt I caused them. If I could go back in time, I would, but I can't," he said.

He is the first Canadian charged under the Security of Information Act, which was passed after the Sept. 11 attacks. That means the judge has no prior cases to help him sentence the former threat assessment officer with a top secret clearance.

Crown attorney Lyne Décarie recommended he serve 20 years for spying plus five years for the breach of trust charge.

The Crown recommended Delisle get 1.5 days credit for every day he was in custody. He's spent one year and 19 days in jail.

Décarie is also asking that Delisle be fined $111,812, equal to what investigators say he received from the Russians.

Defence lawyer Mike Taylor said Delisle should get a nine- or 10-year sentence.

"If there was any damage that was caused and it was apparent, we definitely would have heard about it in this court," he said.

He added there is no indication Delisle held back any information he had about his spy activities when he confessed to an RCMP interrogator in January 2012.

Judge Patrick Curran is expected to hand down his sentence Feb. 8.

While outlining its reasoning, Décarie drew comparisons to Nova Scotia's other infamous spy who sold secrets. Stephen Joseph Ratkai, a Canadian who grew up in Nova Scotia and Hungary, had been caught in an elaborate double-agent scheme run by the U.S. military.

In March 1989, Ratkai was charged with two counts under the Official Secrets Act for selling secrets to the former Soviet Union. He pleaded guilty and was sentenced to two concurrent terms of nine years.

The Crown said at the time the court was told Ratkai knew what he was doing and how important the information was to the Soviets.

With little Canadian precedent, Décarie also compared Delisle to British spies who were sentenced to 10 years in prison.

In Canada the maximum penalty is life in prison.

On the first day of the hearing, the Crown called three witnesses to say they still do not know the scope of damage Delisle's four years of treachery did to Canada's foreign relations.

A defence witness downplayed the harm, saying it's mainly theoretical.

The story began in 2007 when Delisle walked into the Russian Embassy in Ottawa wearing a red ball cap and civilian clothes. He flashed his Canadian military identification and asked to meet with someone from GRU, the Russian military intelligence.

There he had access to Stone Ghost, an allied system.

The Crown revealed Thursday that Delisle also had access to a Department of National Defence secret system and a computer system dealing with message traffic, a NATO system and Mandrake, a Government of Canada secret system.

Delisle had to sign a confidentiality agreement to get access to all these secret data bases, according to the Crown.

Delisle is still officially in the navy and drawing pay. The Department of National Defence says that will change once the judge renders his sentence.