Forget Sidney Crosby, it may be Nathan MacKinnon's time as MVP

The NHL will soon release its finalists for its individual awards to be handed out in Las Vegas in June, and one of the most intriguing races involves the other player from Cole Harbour, N.S.

For hockey fans, this is the best time of year. The first NHL team to pick up 16 wins over the next two months will raise Lord Stanley's mug.

But as teams vie for the ultimate prize, the NHL will reveal the finalists for its individual awards, too, to be handed out in Las Vegas in June.

Maybe the most intriguing race involves a player from Nova Scotia — and this time it's not Sidney Crosby. It's that other star from Cole Harbour: Nathan MacKinnon of the Colorado Avalanche.

Many NHL analysts are predicting MacKinnon will be one of the three finalists for the Hart Trophy, which goes to the league's most valuable player.

Here are five reasons why MacKinnon is deserving of being a nominee and maybe even winner of the prestigious award, previously awarded to his friend Crosby in 2007 and 2014.

Sixteen teams made the NHL playoffs and Colorado is one of them. That's bigger than a big deal. Last year the Avalanche were by far the worst team in the league with only 48 points. This season, they improved their game to 95 points, one point shy of doubling last year's total.

The last time a turnaround of that magnitude happened over an 82-game season was 11 years ago. A young Crosby led Pittsburgh to much higher ground. And guess what? He won the MVP award that season.

2. Clutch when he had to be

Being the league's MVP means you have to be clutch for your team in big moments.

Colorado needed a win over St. Louis in their final regular season game to clinch a playoff spot. 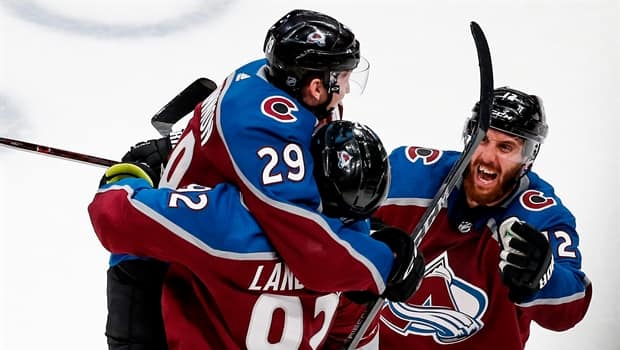 MacKinnon scored the game-winning goal and added an assist in a 5-2 win over the Blues.

All told, he led the league with 12 game-winning goals. Clutch indeed.

3. His best season ever

When Colorado traded Matt Duchene to the Ottawa Senators in mid-season, it was like someone turned on a switch inside MacKinnon. He became a force in the second half of the season and at one point was just one point away from taking over the NHL scoring race.

MacKinnon finished fifth in scoring despite missing eight games due to injury.

Another reason MacKinnon could win is this season's wide-open Hart Trophy race.

There are a dozen players who realistically have a good shot of winning it, which is unheard of.

Last year's winner, Connor McDavid of the Edmonton Oilers, had another great year. He won the scoring title, but his team failed to make the playoffs.

Crosby had another good season but in Pittsburgh his play was eclipsed by teammates Evgeni Malkin and Phil Kessel.

Nikita Kucherov of the Tampa Bay Lightning was the odds on favourite for most of the season but his individual play, as well as the play of his team, dipped in the second half.

If MacKinnon gets the nod as a finalist he could be up against two other Canadian players who, like MacKinnon, did a lot just to get their teams into the playoffs.

Taylor Hall of the New Jersey Devils had a breakout year with 93 points and had 41 points more than the next highest scorer on the Devils, former Halifax Mooseheads star Nico Hischier.

Claude Giroux of the Philadelphia Flyers could be the third finalist.

He is the heart and soul of the Flyers and went over the 100-point mark for the first time in his 10 years with Philly.

With a three-goal performance in the final game of the season that cemented a playoff spot, his hat should be thrown into the MVP ring.

Paul Palmeter is an award-winning video journalist born and raised in the Annapolis Valley. He has covered news and sports stories across the province for 30 years.