With Mother's Day just around the corner, one Nova Scotia foster mom is hoping her story will inspire others to open their hearts and their homes. 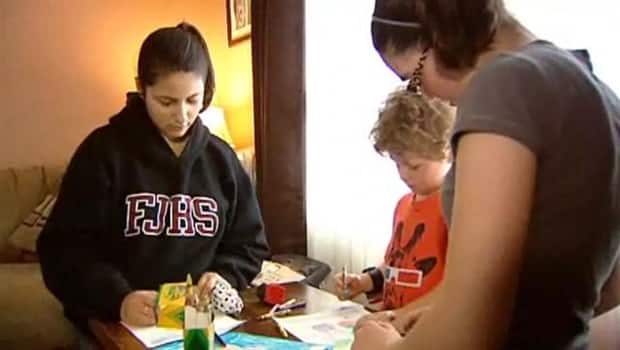 9 years agoVideo
1:41
A N.S. foster mom is encouraging others to open up their hearts and homes. 1:41

With Mother's Day just around the corner, one Nova Scotia foster mom is hoping her story will inspire others to open their hearts and their homes.

Mary Smith, who has four biological children, said the decision came naturally when she decided to become a foster parent six years ago.

"I have, right now in my home, six children. If you could count all of them I've probably had about 27," she told CBC News.

Smith, who works for the Federation of Foster Families of Nova Scotia, said the number of foster parents in the province has gone down in the last several years.

In the last six years, the number of families willing to take in foster children has dropped from 1,100 to approximately 860.

Smith believes part of that decline is due to older foster parents retiring and the negative portrayal of foster children on television.

"There's still the children in need, there's still children that need to be in care. Foster homes are swamped with children because there's not enough homes, so we need more foster families," said Smith.

"It is a great thing, it truly, truly is. If you can open your heart and home to a child, that's all they want."

Anna Amro-Smith, one of Mary Smith's foster children, said it didn't take long for her to feel like a member of the family after she was taken in to their home in Fairview.

"We went out and got me Cheez Whiz because that was my comfort food. Within the second week, I started calling my mom, 'Mom,'" said Anna.

She said her foster family may have saved her from a life on the street.

"I would be probably one of those kids that are in a lot of trouble and got into the drugs," Anna said.