The Musquodoboit Valley Co-op is being threatened with foreclosure and says the bank it's been dealing with even took money set aside for charity. 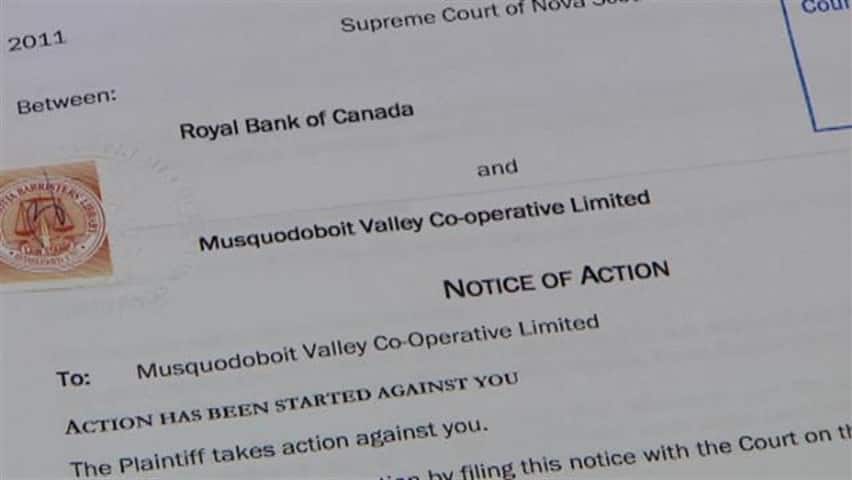 9 years agoVideo
2:36
A bank is threatening to foreclose on one of the oldest Co-ops in the province. 2:36

The Musquodoboit Valley Co-op is being threatened with foreclosure and says the bank it's been dealing with even took money set aside for charity.

Earlier this week, the RBC Royal Bank called a $422,000 loan it had given the Co-op, threatening the 78-year-old organization with foreclosure.

John Tilley, the chair of the Co-op board, said the group can't repay the full amount and made a proposal for a partial repayment, in what they thought was an opening position.

"There would be a number somewhere in the middle, which would be a win for both of us, allowing us to go forward to be a business for another 78 years in Musquodoboit," Tilley told CBC News.

"And the Royal Bank can get out of the situation that they apparently don't want to be in."

Instead, the bank seized the Co-op's trade accounts. Tilley said the bank also took another $2,200 in funds set aside for Christmas Daddies and other charities.

"I just can't believe that. That's beyond the beyond," Tilley said.

"Here's an institution that has a funny little guy with a black hat that jumps around in their commercials, they sponsor the Olympics, they're A-1 gold star people in Canada and they've taken money out of our charitable accounts. So how does that compute?"

The Musquodoboit Valley Co-op intends to stay in business and is turning to the Credit Union as its new banker.

Goldie Dickie, who has been a member at the Co-op since 1942, said she hopes it succeeds in its bid to stay alive.

On Thursday, the 14 staff at the store were paid in cash after the bank froze all of the Co-op's accounts.

"Three little ones at home and Christmas coming and not knowing if that next paycheque is coming is a bit disconcerting."

The Co-op now has 45 days to figure out how it will satisfy RBC Royal Bank. A spokesperson from the bank declined to comment on the story on Thursday, citing privacy reasons.