Four of the five Canadian Forces personnel who said they were members of the Proud Boys and disrupted a Mi'kmaw ceremony in Halifax on July 1 have been allowed to return to their regular duties.

Four of the five Canadian Forces personnel who said they were members of the group the Proud Boys and disrupted a Mi'kmaw ceremony in Halifax on July 1 have resumed their regular duties with the military but remain on probation.

Rear-Admiral John Newton said following the military police's investigation no charges would be laid against the members. Three serve in the navy and one is in the army.

He said one of the five members has since left the military of his own accord, a process that started before the Canada Day incident and was unrelated.

Newton said the four remaining servicemen, who are now being monitored, must pass a probation period in order to continue with the military.

He wouldn't spell out the exact disciplinary measures the members have faced but said they were removed from their workplaces and weren't allowed to handle classified material.

Newton said the members are experiencing professional setbacks and personal consequences in their units and the community.

None of the men received demotions or were moved as a result of their behaviour. Newton said being on probation limits what they can accomplish professionally. 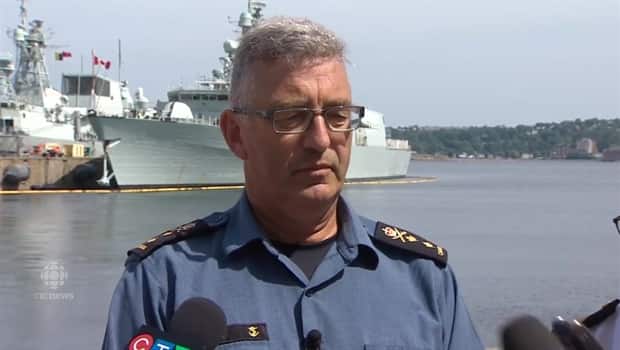 The Proud Boys decision, in Rear-Admiral John Newton's own words

4 years ago
5:25
Four of the five Canadian Forces personnel who said they were members of the Proud Boys and disrupted a Mi'kmaq ceremony in Halifax on July 1 have been allowed to return to their regular duties. 5:25

Speaking to reporters, Newton defended the military's actions, saying "this is not lightweight punishment. These non-commissioned members who are early in their career, have remorse."

"This is a permanent mark on a member's record," he said Thursday afternoon. "Any trespass against those conditions, any repeat leads to their release from the Canadian Armed Forces, or, it's good potential depending on those circumstances, will lead to their release."

Newton said he interviewed the men personally and "saw their acknowledgement, their desire, their intent to adhere to the conditions."

He also said the four are expected to learn from their "monumentally poor judgment."

"I don't have a huge surplus of people in the Canadian Armed Forces who we've already spent million of dollars training, who in their mistake and in this learning ... will work to restore the trust between them and the chain of command. They will be a good investment in the long term."

Their side of the story 'means nothing'

On Canada Day, dozens of people were gathered around the statue of Edward Cornwallis in downtown Halifax to mourn the atrocities committed against Indigenous people when the group of five men clad in black polo shirts approached.

Cornwallis, a governor of Nova Scotia, was a military officer credited by the British for founding Halifax in 1749. Later that year, he issued a bounty on the scalps of Mi'kmaq people. There has been ongoing debate over the use of his name on public parks, buildings and street signs.

The off-duty members were carrying a Canadian Red Ensign flag and announced they were members of "The Proud Boys, Maritime chapter." On Facebook, the group describes itself as "a fraternal organization of Western Chauvinists who will no longer apologize for creating the modern world."

Newton said the servicemen's involvement violated the military's code of conduct. Under the Queen's Regulations and Orders personal conduct section, members cannot be seen or heard by members of the public doing anything that could "reflect discredit on the Canadian Forces or on any of its members."

"I have heard [the men's] side of a story," Newton said. "It means nothing. What was perceived by the public is what matters …. No matter what they thought they were doing, or what was going to occur, it was not what occurred, and that they have to bear responsibility for, and they do."

Since the Canada Day incident, Newton said he met with Chief Grizzly Mamma, the woman who was shaving her head when the Proud Boys arrived at the Cornwallis statue.

He also said he consulted with a Mi'kmaw adviser, Don Julien, to discuss increasing the work the military does with Indigenous communities, including recruitment efforts.

Halifax's poet laureate Rebecca Thomas, a Mi'kmaw activist who was part of the Canada Day event, said she would've also liked to see the members meet with the group directly affected by their actions.

"Where the individuals who were involved in that incident had to face the community and really see the people that they harmed, in a face to face way," she told CBC after Netwon's press conference.

"If they could do that in a way that was culturally significant, and it was a way that made them uncomfortable perhaps and challenged what they knew to be an appropriate reaction, perhaps we might see some serious restorative justice."

Another post said "We win, our brothers the Halifax 5 are returning to active military duty with no charges, let the SJW [social justice warriors] tears pour. Proud of our boys."

Following the July 1 incident, five members were relieved of their duties with pay and assigned other jobs during the military investigation into their conduct.

At the time, Gen. Jonathan Vance, chief of defence staff, called their actions "deplorable" and apologized to Canada's Indigenous people for the "behaviour of a few."

The investigation was completed in mid-August, but the military didn't release the results until Thursday.  A spokesperson for the Canadian Armed Forces said they can't release the length of the probation period due to privacy concerns.

Newton announced the servicemen's return to work on his last full day in the position as the head of the navy on the East Coast.