Nova Scotia Finance Minister Graham Steele says the military cuts announced in Thursday's federal budget give him the most cause for concern but the $25-billlion shipbuilding contract shouldn't be affected. 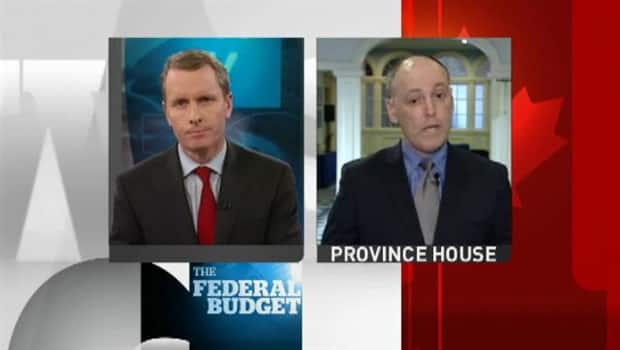 Nova Scotia Finance Minister Graham Steele says the military cuts announced in Thursday's federal budget give him the most cause for concern but the $25-billlion shipbuilding contract shouldn't be affected.

In dollar terms, the biggest cuts in the budget were made to the Department of National Defence, at $1.1 billion over three years. The budget also included a delay of $3.5 billion in capital work for seven years.

"The Armed Forces are a critical element of Nova Scotia's fabric as well as being an important economic driver in our region," Steele told reporters soon after the federal budget was presented.

"The federal government says they're going to keep the regular forces at the same level, that's promising."

Steele said he was also reassured by comments that of the 19,000 public service jobs to be eliminated nationally, about a third are expected to be in the National Capital Region around Ottawa.

Steele said about 29,000 people in Nova Scotia are paid by the federal government and about 50 to 60 per cent of those workers are in the military.

There's no word on how many jobs may be eliminated in this province.

The finance minister also said there's no indication the delay in capital spending will impact the $25-billion federal shipbuilding contract.

"Our understanding is this does not effect — in any way — the shipbuilding program which is so important to Nova Scotia's future," said Steele.

While he has a wait-and-see approach on cuts to the Atlantic Canada Opportunities Agency and Fisheries and Oceans Canada, Graham said he was worried about the elimination of the Atlantic Investment Tax Credit.

"That does help attract business. We're going to look at it and see what the impact is going to be. It's not going to be phased out immediately but anything that helps attract investment to Nova Scotia is a good thing," he told CBC News.

"We'll be sorry to see it go, so we're a little bit disappointed on the jobs and economic growth side of this budget."

Steele said his staff have told him there's nothing in the federal budget that would cause provincial numbers to change, so he expects to table the provincial budget next week as scheduled.

But the fact that budget cuts weren't as bad as first feared is of little comfort to some Nova Scotians.

Mike Duhamel, who is with the union that represents Service Canada employees in Cape Breton, said his members are already dealing with cuts from last year's budget.

Duhamel, the president of Local 80217 of the Canada Employment and Immigration Union, said the reductions announced on Thursday won't just affect workers losing their jobs.

"Things like that start to get slower or go away. Any of these cuts are scary."

Nova Scotia environmentalists, such as the Halifax-based Ecology Action Centre, say they're also disappointed with the federal budget.

Fuller said all Canadians should be concerned about measures that may weaken environment protection.

"A lot of children have asthma. When your air gets polluted, you start to care about the environment."