Topless and proud of it: Dartmouth woman embracing life after double mastectomy 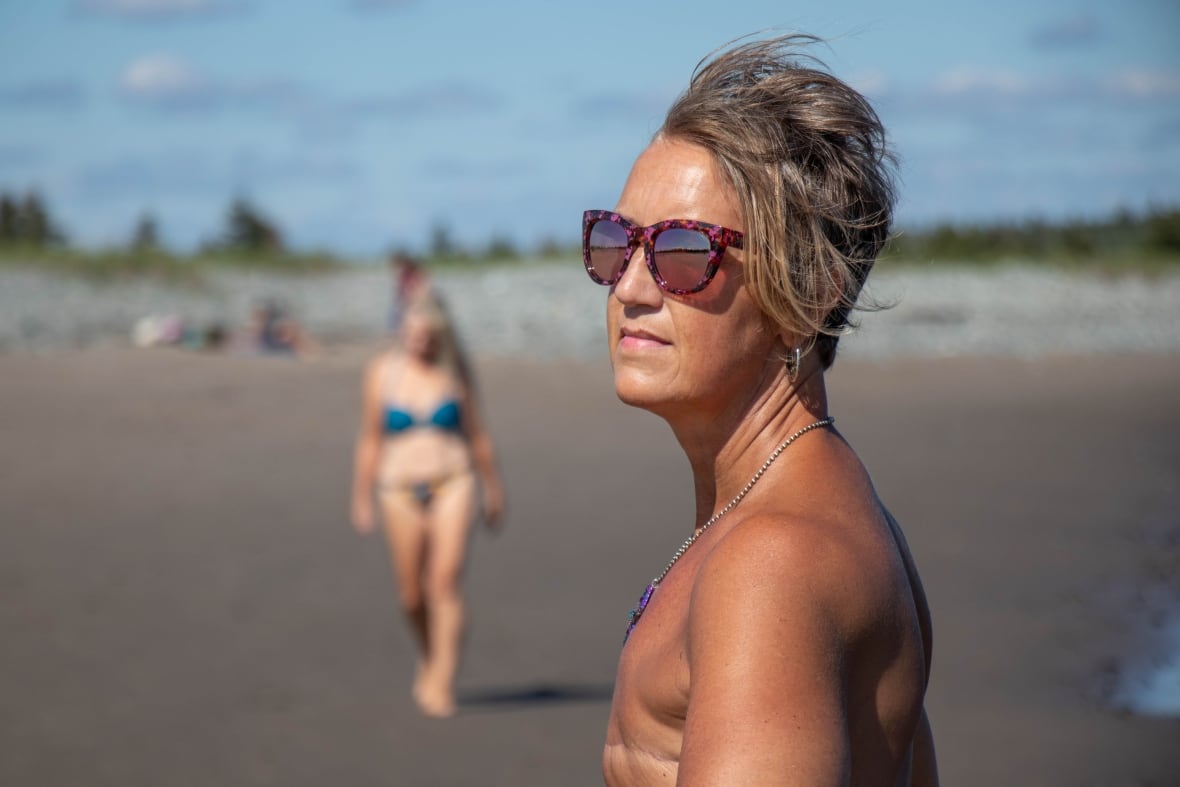 Topless and proud of it: Dartmouth woman embracing life after double mastectomy

Whether it's walking along the water's edge or diving into the ocean, Christina Belding is in her happy place at any of the beaches near her home in Dartmouth, N.S.

And she's doing it all while topless and breastless.

She's unselfconsciously revealing her flat chest with two 20-centimetre scars where she had breasts before cancer invaded her right breast.

"My breasts already had a good time, and more than enough fun," she said during an interview Tuesday at Rainbow Haven Beach, one of her go-to spots. "I'd sooner have a flat start than trying to reinvent the past with boobs."

Belding first noticed a lump in her right breast during a self-examination, which was initially missed by a mammogram.

The day before she turned 52, Belding underwent a double mastectomy at the IWK Health Centre in early March, a few days before the COVID-19 pandemic was declared. She opted for what's known as esthetic flat closure, a procedure in which the surgeon creates a smooth, flat chest with no excess fat or skin.

In a world where post-mastectomy breast reconstruction is the norm, that's the last thing Belding wanted.

"The boobs took early retirement. I'm glad they're gone because I feel safer," she said.

Maintaining her health is one of Belding's biggest priorities. To reduce the risk of cancer, she opted for a double mastectomy.

She never considered breast reconstruction because it would have involved more surgeries and more risks from complications and implants.

For her, none of that was worth it for breasts that would have no feeling, and serve no purpose other than to "look fine in a shirt," she said with derision in her voice.

In a world in which women's bodies are sexually objectified, leading some to undergo surgery in the quest for perfect breasts, Belding rejects that destructive hypocrisy.

In fact, Belding — minus her B-cups — said she looks even better in her clothes. She embraces her flat chest, which has made enjoying sports, like rowing, easier.

Her tidy scars, which she protects with sunblock, remind her of cancer's silver lining.

"I've always felt fortunate with even all the traumatic things and the adversity that's happened to my life, I see myself as a survivor," she said.

Her new body is on display on her Instagram feed. It's part of her mission to spread the word about esthetic flat closure.

And her breastless chest has not gone unnoticed on the beach. She's seen young children take a second look and she hopes that sparks conversations at home about cancer.

"It doesn't need to be scary, and it shouldn't. Having breasts shouldn't … define who you are as a woman," Belding said.

What annoys her are the assumptions about "Are you gonna get new boobs? Or don't you think you'd feel better," she said.

"They don't ask, 'Hey, was it scary having cancer? Are you worried you're going to die?"

She'll never forget a conversation with a man who wished more women were like her.

"He waved at me, and stopped me and thought I was so brave for walking around," she recalled.

"His wife had died from breast cancer and he had said he'd wished that she had possibly been more aggressive and had a mastectomy," she said.

Belding said her choice to undergo a double mastectomy and esthetic flat closure isn't for everyone, and isn't a guarantee she'll beat cancer. But it's her best shot at beating cancer, along with taking oral chemotherapy drugs to reduce its recurrence.

As she gets ready for another swim in the ocean, she said she feels lucky in her cancer journey.

"For the most part, right now for me, [it] feels like a bump in the road," Belding said.

Elizabeth Chiu is a reporter in Nova Scotia and hosts Atlantic Tonight on Saturdays at 7 p.m., 7:30 p.m. in Newfoundland. If you have a story idea for her, contact her at elizabeth.chiu@cbc.ca.