The man who killed 22 people in rural Nova Scotia stockpiled cash, food and fuel due to concerns about the COVID-19 pandemic, but he gave the people close to him no indications he was plotting an attack, according to the RCMP.

The man who killed 22 people in rural Nova Scotia stockpiled cash, food and fuel due to concerns about the COVID-19 pandemic, but he gave the people close to him no indications he was plotting an attack, according to the RCMP.

Over 13 hours and a span of 150 kilometres, Gabriel Wortman killed friends, neighbours and strangers on April 18 and 19 while masquerading as a Mountie.

In the weeks before the mass shootings that started in Portapique, N.S., fear about the potential collapse of institutions and infrastructure led Wortman to liquidate his savings and investments, said RCMP Supt. Darren Campbell in a lengthy interview with CBC News.

"We do know that the gunman was very paranoid. We also know some would describe him as a survivalist," he said.

"He'd voiced concerns about the pandemic, and that he wanted to be prepared in the event of things not working in the way they normally would."

Many questions still remain about the shooter's actions leading up to his deadly rampage. Earlier this month, Maclean's magazine obtained videos of Wortman withdrawing money from a Brink's depot in Dartmouth on March 30 and reported it was a $475,000 transaction.

A spokesperson for Brink's told CBC News it was unable to comment because of the ongoing RCMP investigation.

Campbell said RCMP discovered hundreds of thousands of dollars in a fire-proof container on one of the properties Wortman owned in Portapique. He said investigators are auditing his financial records and would not specify the exact amount of cash seized.

So far, he said they think the gunman believed it wasn't safe to leave his savings in the bank.

"He felt that his financial interests would be better served by him having control over his financial assets so that's why he converted them," said Campbell, who through his role as support services officer from Nova Scotia RCMP gets updates on investigation.

Probate court documents list the shooter's six properties as being valued at $712,000. His personal investment wealth, referenced as encompassing RRSPs, RRIFs and pensions, was estimated at $500,000.

"From what people tell us, he was hardworking and he had many holdings. He was able to amass what wealth he had based on opportunities he took. He was also a recipient of some inheritances. All of those things contributed to his wealth," Campbell said.

In a 2011 will, he left all his assets to his common-law partner. She has since renounced her role as executor of his estate. Several family members of people killed in the rampage have launched a class action against the estate.

Maclean's spoke to sources who suggested the transaction at Brink's was consistent with a payout to an agent or informant who passed information to police. CBC News has not confirmed this was the case. RCMP have repeatedly said they had no relationship with the gunman. Campbell called the allegations "very sensational and factually incorrect."

Paul Derry, who was a police informant and agent including in relation to a Hells Angels-ordered shooting in Halifax in 2000, said he was never paid that way.

"I think that it is an awful leap to conclude somebody is an informant or an agent because they picked up a large amount of money. There's nothing in that [scenario] that would even be familiar to me and I've been paid many times over my 39 years of dealing with the RCMP," he said.

Derry said he would have refused to go into a Brink's to collect either payment or "flash money" used for a drug buy.

"The security breaches, you'd be open to, there would just be too many. You're talking about walking into a privately owned company with many people who work there. The security clearance is going to be minimal in comparison to what you'd need for an undercover operation," he said.

There were always extensive protocols in place for any money transfer and they always involved multiple RCMP officers, one of whom would give the cash to him directly, Derry said.

Campbell maintains investigators have found no evidence that Wortman had illegal sources of income or that he acted in any capacity as an informant or agent for the RCMP.

Revealing whether someone has provided information to police as a confidential source is privileged information that cannot be divulged, said Campbell. However, the Mountie stressed that scenario didn't apply in this case and he called reporting to the contrary a "fairy tale."

"Recent media articles painting him as some underworld, organized crime figure, nothing has been uncovered whatsoever that would suggest that."

The RCMP say they've determined the gunman acted alone during the rampage, but they're still investigating whether he had any help leading up to the attacks. So far, no charges against other parties have been laid.

They continue to look into the origins of three guns Wortman obtained from the U.S. and the authentic police uniform he wore.

A man whose parents own a home in Portapique printed the decals that Wortman used to create his replica cruiser.

Peter Griffon, who previously was linked to a Mexican drug cartel and faced drug charges, used to work at a sign shop in Truro, N.S. Police say he printed the graphics without his employer's permission. The business owner has not responded to CBC's multiple requests for comment.

Campbell said police have spoken to Griffon and he has been cooperative. He said while there may have been copyright issues related to the RCMP logo, printing the decals isn't a criminal offence.

"He's obviously someone we have discussed at length and we're convinced he wasn't aware of any type of plan that the gunman had," he said.

While people have referenced Wortman making some "offside comments" prior to the mass shooting, Campbell said investigators have found the steps he took — including buying hundreds of dollars worth of gasoline — reflected he was stockpiling due to COVID-19 as opposed to any premeditation of the largest mass shooting in Canada's history.

In normal times, those same actions would have raised red flags, Campbell said; but given that many residents were grappling with worries about groceries and gas, it didn't stand out. 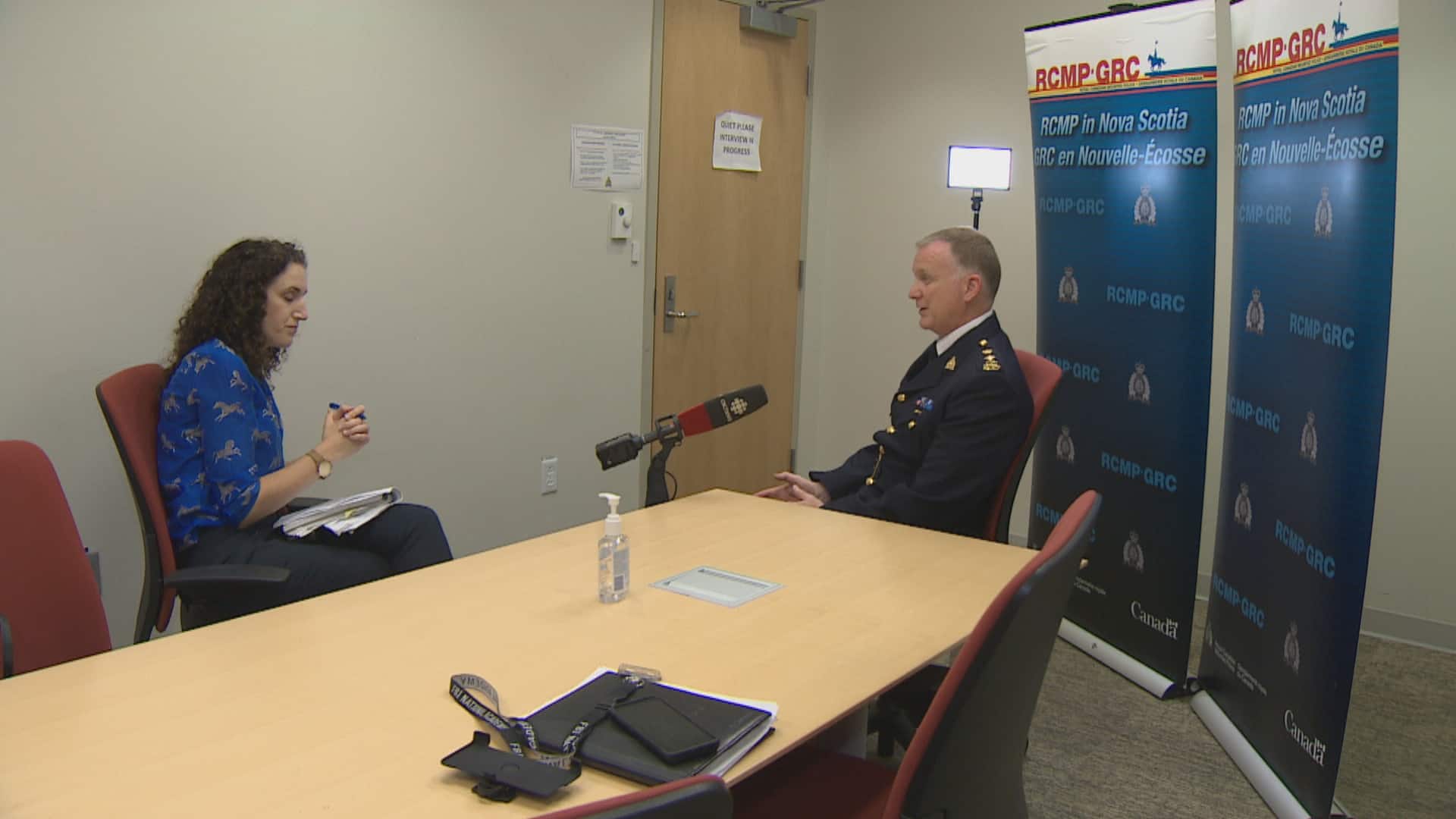 Investigators believe the gunman ended up using gasoline when he set fires that destroyed most of his own cottage, a large warehouse and several vehicles on his own properties, as well as homes and vehicles belonging to some of the people he killed.

A forensic psychologist and RCMP profilers are now conducting a psychological autopsy of the shooter. Earlier this month, Campbell said the initial findings reflected that he was an "injustice collector" who fixated on grudges and let rage build up about perceived slights.

People police interviewed have described the 51-year-old denturist as abusive and controlling. In 2002, he pleaded guilty to assaulting a teen. A former neighbour has spoken out about being harassed by him and said in 2013 she reported to RCMP that he was violent toward his common-law spouse and that he owned illegal guns.

RCMP also believe Wortman's preparations for weathering the pandemic included the decommissioned police car he outfitted to look like a modern RCMP cruiser that he used during the rampage.

"His comments were that if he needed to escape, that he wouldn't be challenged if he was driving such a vehicle," said Campbell.

"We can't ignore those realities and those facts. These are pieces of information that was shared with us by the people closest to him."

But the shooter also started putting together the vehicles long before the coronavirus became a concern. Campbell confirmed he acquired it last fall and many people knew about the project.

It was one of several stripped-down surplus police cars he's believed to have purchased from government auctions.

Wortman dodged raising alarm bells among those he knew, the senior RCMP officer said, because he told people the car would be a type of tribute to the force.

"It was to be representative of fallen officers so people bought that story. So why he wanted it, needed it, decided he needed it at that particular time, obviously we'll never know."

It's still not clear what prompted the rampage. RCMP have said Wortman attacked his common-law partner first after they started arguing that Saturday evening. He restrained her in one of the decommissioned police cruisers while he torched their home, according to police and court documents.

Knowing motives may not protect the public

Some forensic psychiatrists caution against speculating about motives in mass shootings, as it risks giving people contemplating similar violent acts a way to identify with or relate to perpetrators.

Dr. James Knoll, director of forensic psychiatry at SUNY Upstate Medical University in Syracuse, N.Y., said since drivers like resentment, revenge, narcissism and injustice can take many forms; it's better to focus on warning signs that could help prevent similar acts.

Psychiatrist Dr. Ronald Pies, who with Knoll co-authored a 2018 column in the Psychiatric Times titled Beyond "Motives" in Mass Shootings, said looking at motives doesn't usually do anything to protect the public.

"Unless there are reasons, in a mass shooting, to suspect an extensive plot that involves other would-be shooters — as, for example, in a mass attack planned and carried out by a terrorist cell — it is hard for me to see the benefit of what I would call 'motive mongering,'" he said by email.

Do you have a tip about this story? Please click here to get in touch.