Nova Scotia mass killings: What we know and what we don't know

RCMP described mass killings carried out by a gunman in Nova Scotia this weekend as "tragic" and "incomprehensible." Police said at least 19 people, all adults, were killed, including a 23-year veteran of the force. Here’s a look at what we know — and what we don’t.

At least 19 have been killed, but exact death toll, locations and motive of gunman still unclear

RCMP described mass killings carried out by a gunman in Nova Scotia this weekend as "tragic" and "incomprehensible."

At least 19 people, all adults, are dead, including the gunman, Nova Scotia RCMP said at a press conference Monday afternoon.

That surpasses the 14 killed in the 1989 École Polytechnique massacre in Montreal.

Police said the death toll is likely to rise.

Here's a look at what we know — and what we don't.

Where and how did it start?

Police said at a news conference late Sunday afternoon that they found "several" casualties inside and outside a residence, but no shooter.

Eyewitnesses in the community later said they saw multiple fires.

"We saw a fire down the road and thought that's all that it was. Then we saw a second fire and a third fire," Portapique resident Mike MacKay said Sunday morning in a telephone interview from his home.

Police secured the area and began a search that led to multiple sites in the area, including the structures on fire. They eventually pursued the gunman across several Nova Scotia communities.

The province's police watchdog, the serious incident response team, named the village of Shubenacadie as the site of a "serious criminal event."

While driving near Highway 102 — one of the province's main arteries — on Sunday morning, Shubenacadie resident Darcy Sack said she and her friend saw two police vehicles on fire by the silver suspect vehicle. She saw an officer run toward one of the burning vehicles as shots rang out, before seeing the shooter — dressed like a police officer — in the silver car again being chased by police.

Crimes were scattered over at least 50 kilometres and 16 crime scenes, police said.

The shooter used his gun during the rampage but may have used "other methods" as well, said RCMP Chief Supt. Chris Leather.

What do we know about the victims?

Nova Scotia RCMP said at a Monday afternoon press conference that there were at least 19 victims, all adults, but that the death toll is expected to rise. Police said the gunman knew some but not all of the victims.

Among the victims named so far is RCMP veteran Const. Heidi Stevenson, who police say was killed Sunday morning while responding to the incident. The married mother of two had been with the force for 23 years.

Lisa McCully, a teacher at Debert Elementary, was also killed in the attack, according to a news release from the Nova Scotia Teachers Union. Later on Monday, the Victorian Order of Nurses for Canada (VON Canada) confirmed that two employees, Heather O'Brien and Kristen Beaton, were also among those killed.

O'Brien was a licensed practical nurse, wife, mother and grandmother. VON Canada said she had worked as a nurse with the organization for nearly 17 years. Beaton was a continuing care assistant, as well as a young wife and mother. VON Canada described both women as having shown deep care and compassion for others.

Police said a male RCMP officer was among the injured, but didn't release his name. His injuries are not life-threatening, Leather said.

He said the civilian deaths appeared to be at least partly random.

What do we know about the gunman?

Gabriel Wortman, 51, is suspected to be the lone person involved in the rampage.

A Gabriel Wortman is listed as a denturist in Dartmouth, according to the Denturist Society of Nova Scotia website.

A photo of Wortman issued by the RCMP matches video footage of a man being interviewed about dentures by CTV Atlantic in 2014.

Coun. Tom Taggart, a lawmaker who represents the Portapique area in the Municipality of Colchester, said he didn't know Wortman well but spoke to him a few times when he telephoned about municipal issues. He described knowing Wortman's "lovely big home" on Portapique Beach Road.

How did the rampage end?

The chase for Wortman eventually made its way to one of Nova Scotia's busiest highways. It ended near a gas station in Enfield, about 35 kilometres from Halifax, where police officers shot Wortman. SIRT said in a news release Sunday night that he died at the scene.

There were half a dozen police vehicles at the gas station. Yellow police tape surrounded the gas pumps, and a large silver-coloured SUV was being investigated.

What do we know about Wortman's thinking?

Wortman was wearing all or part of an RCMP officer's uniform and for part of the incident was driving a mock-up made to look like an RCMP vehicle — planning that "certainly speak to it not being a random act," Leather said.

However, Leather also said that the killings appear to be in part "very random in nature" and that some of the victims appear to have had no relationship with him.

What we don't know

An exact death toll: Because there were so many crime scenes, it was hard for police to initially determine the complete death toll. Monday afternoon, they said at least 19 people were dead but that they expected that number to rise. It's also unclear how many people were injured, except that it was at least two.

The circumstances surrounding Stevenson's death: Leather said he was not at liberty to discuss the RCMP officer's death.

Details of the circumstances around Wortman's death are also incomplete. The police watchdog is investigating, as it does all serious incidents involving police in Nova Scotia. 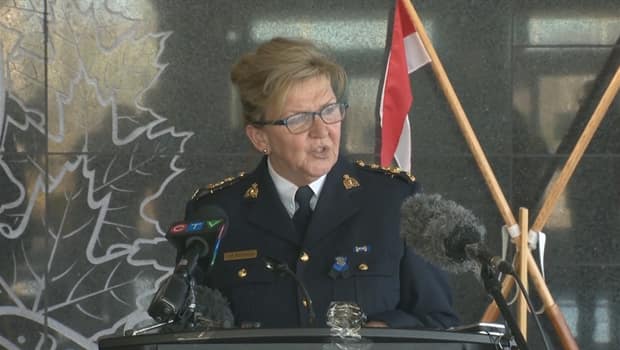 11 months ago
1:05
Const. Heidi Stevenson is survived by her husband and two children. Another officer was injured during the incident that occurred over the span of 12 hours across several communities.    1:05

Locations: The crime scenes are scattered across the province, and police do not yet have a list of locations or times. Some of the sites had not yet been processed as of Sunday evening, Leather said.

Motive: Leather said it was too early in the investigation to have any sense of what the motive might have been, including whether the COVID-19-related lockdown had any bearing on Wortman's behaviour.

Leather said that for privacy reasons he couldn't discuss Wortman's relationships with the victims, except to say some of them appeared to have no relation to the suspect.

RCMP Commissioner Brenda Lucki said she believes there was an initial motivation that then turned to randomness.

"We don't know for sure, and we're going to have to do a lot of work on finding the motivation — a lot of background, a lot of profiling-type events and a lot of crime scene processing," she said.

She said she doesn't believe terrorism was a factor.

Leather said he expects more details to be released in the coming days.