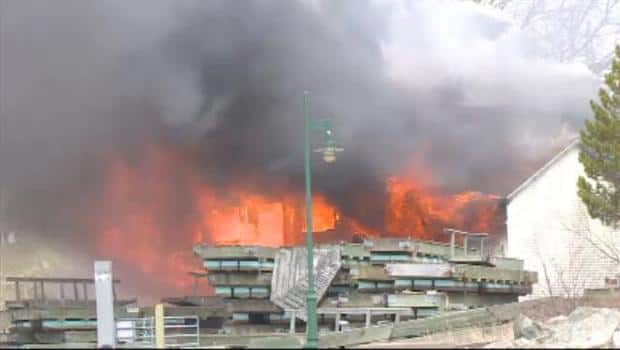 The fire broke out at around 1:40 p.m. Friday and completely engulfed the building as firefighters tried to extinguish the blaze.

Cape Breton Regional Police Staff Sgt. Ken O'Neill said firefighters had their work cut out for them when they arrived at the scene.

"What was presented to them was a very quick, heavy burning fire," said O'Neill. "A challenge to the fire was the propane tanks next to the local hotel, and because of their due diligence and their expertise, we were able to avoid any further challenges with this fire."

Derek Joseph Harris, 34, was arrested for breach of probation near midnight on Friday. Following the arrest, investigators were able to follow up with an arson charge in connection to the fire at the Royal Cape Breton Yacht Club.

Harris was remanded into custody to the Cape Breton Correctional Centre and is scheduled to appear in court on Monday to face charges of arson and breach of probation, with his bail hearing to follow.

The club had been at the centre of some debate after Enterprise Cape Breton Corporation bought the club earlier this year for $280,000 and had said the plan was to demolish the building as it was too expensive to fix.

The yacht club has said the 113-year-old building needed $2 million in renovations, and financial difficulties and declining membership left the club with little choice but to sell.

Heritage and conservation groups were trying to preserve the building, possibly having it classified as a National Historic Site.

Investigators are continuing to look into the incident. No one was injured.
CBC's Journalistic Standards and Practices|About CBC News