Most of the approaches to the MacKay Bridge are closed Halifax-bound because of a collision. 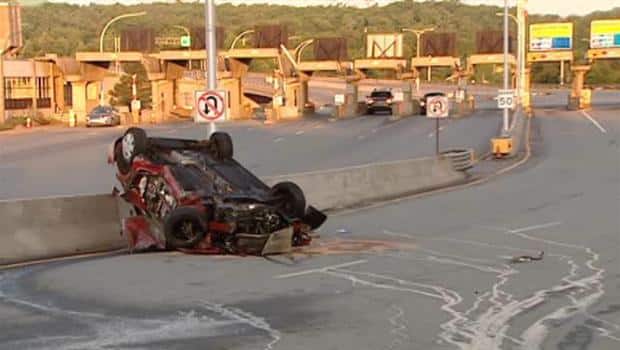 8 years agoVideo
1:55
An early morning crash near the MacKay's tolls injured 2 people and closed the bridge for several hours. 1:55

The MacKay bridge has reopened after an early morning crash that sent two to hospital.

The car hit a guard rail on the right-hand side of the road, at about 5 a.m. It flipped, and came to rest against the concrete barrier in the centre of the approach, some 200 metres from where it first hit the guard rail.

A 58-year-old man and a 56-year-old woman were taken to hospital. Though the woman was thrown from the vehicle, police do not believe their injuries are life-threatening.

Bridge staff had to do a lot of work to make sure there isn't another accident when the site is reopened.

"We're dealing with a large scene," said Steve Snyder of the bridge commission. "There's a lot of debris, and a lot of fluids, transmission fluid, oil. We need to put AbsorbAll down, clean that up, and then try to do a high-pressure detergent wash."

In the range of 10,000 cars would normally cross the span during the morning rush, he said.

"Hopefully, those who can drink coffee and work from their computer at home for a while would consider doing that," said Snyder.

"Wait a little while till the scene is cleared before you jump into traffic, otherwise you're simply going to be sitting there, burning up fossil fuels."

Investigators believe speed may have been a factor in the crash, but don't yet know if charges will be filed.