The Nellie Row cut through the darkness of the North Atlantic this morning as wharves across southwest Nova Scotia came alight and alive on the opening day of the country’s most lucrative lobster fishery. Aboard was what's believed to be Nova Scotia's first all-female lobster crew.

The Nellie Row looks just like any other boat slicing through the waves and darkness of the North Atlantic on the first day of Canada's most lucrative lobster fishery.

But the cheerful red and white vessel is distinct from hundreds of other boats racing out to sea Tuesday morning in one crucial aspect: there are no men aboard.

Gail Atkinson is captain of the boat, named after her grandmother — a trailblazer like herself — and is leading what is believed to be Nova Scotia's first all-female lobster crew.

"I've gotten all kinds of messages from all over the place even as far as Louisiana from another female crew, and it's been fantastic," Atkinson said. "But I kind of feel like I've put a lot of pressure on my crew."

And the stakes are already high.

Nearly 1,700 boats will be fishing in lobster fishing areas 33 and 34, which run from Dartmouth down Nova Scotia's South Shore through to Digby and combine to make up Canada's largest commercial lobster fishery.

Everyone is vying for part of a catch that was last valued at $502 million in the 2017-18 season — and success is dependent on pulling in a strong haul in the first week.

I think you're going to see more and more women out there.- Gail Atkinson, captain of Nellie Row

It's an extraordinarily physical job.

And it's one that's been largely done by men with ice crystals in their beards and cheeks ruddy from the wind and the salt.

But Atkinson says that picture is changing; she's seen a shift in the 26 seasons since her father first took her on to fish tuna with his crew in 1993. Then, she said women supported the boats from the shore, but in the last number of years she's seen more getting on with crews as a bander — a less physical job of sorting and banding lobsters as they're pulled from the traps.

"Now, they're also working out on deck. They're boarding traps. They're running traps, and I don't think that's going to slow down any," she said. "I think you're going to see more and more women out there."

Federal numbers support some of what she's seen. Self-employed women in Nova Scotia's fish harvesting industry jumped from 7.6 per cent to 11.6 from 2000 to 2015, according to figures from the Department of Fisheries and Oceans — most of them captains like Atkinson.

But the percentage of women working for others as harvesters, usually as deckhands, has actually dropped during that same period of time, a trend reflected both in Nova Scotia and in Canada.

The fact that her four-person crew is made up of only women is happenstance, Atkinson said. None of them would be aboard the Nellie Row if its captain didn't believe they could handle the 20-hour days, icy decks or the raw physicality of baiting and loading the 250 traps it is carrying.

Atkinson's wife, Kathryn Moore, joined her on the water five years ago. The other members of the crew are veteran sailors, one on the Bluenose II and another on the Picton Castle, but they've spent little time fishing.

Experience is the only teacher, Atkinson said. While it might slow her down for this year's catch, she said the investment in training her own crew will pay off in the future.

She knows her deckhand Sophie Martel's skill on the water, in the work as first and second mate on the Bluenose II.

But at the wharf in the hours before dawn, Martel said she felt as nervous as she did excited.

I think this is probably one of the more dangerous jobs I've ever taken on, just in that there's a lot of stuff that can go wrong. I think every fisherman on the dock has said, 'Keep your feet out of the line and always wear a knife.'- Sophie Martel, deckhand

"I think this is probably one of the more dangerous jobs I've ever taken on, just in that there's a lot of stuff that can go wrong," she said. "I think every fisherman on the dock has said, 'Keep your feet out of the line and always wear a knife.'"

Even experienced fishing crews have a healthy respect for what can go wrong on Dumping Day, the first day of the season when fishers first set their traps; the Joint Rescue Co-ordination Centre has a Hercules watching from the air and several helicopters on standby.

"I'm just trying to stay real calm and somewhat aware of what's going on around me," Martel said. "I was talking to a friend from Bluenose who said … he's scared. He's nervous we're not going to be strong enough, fast enough, smart enough, but we just gotta go for it." 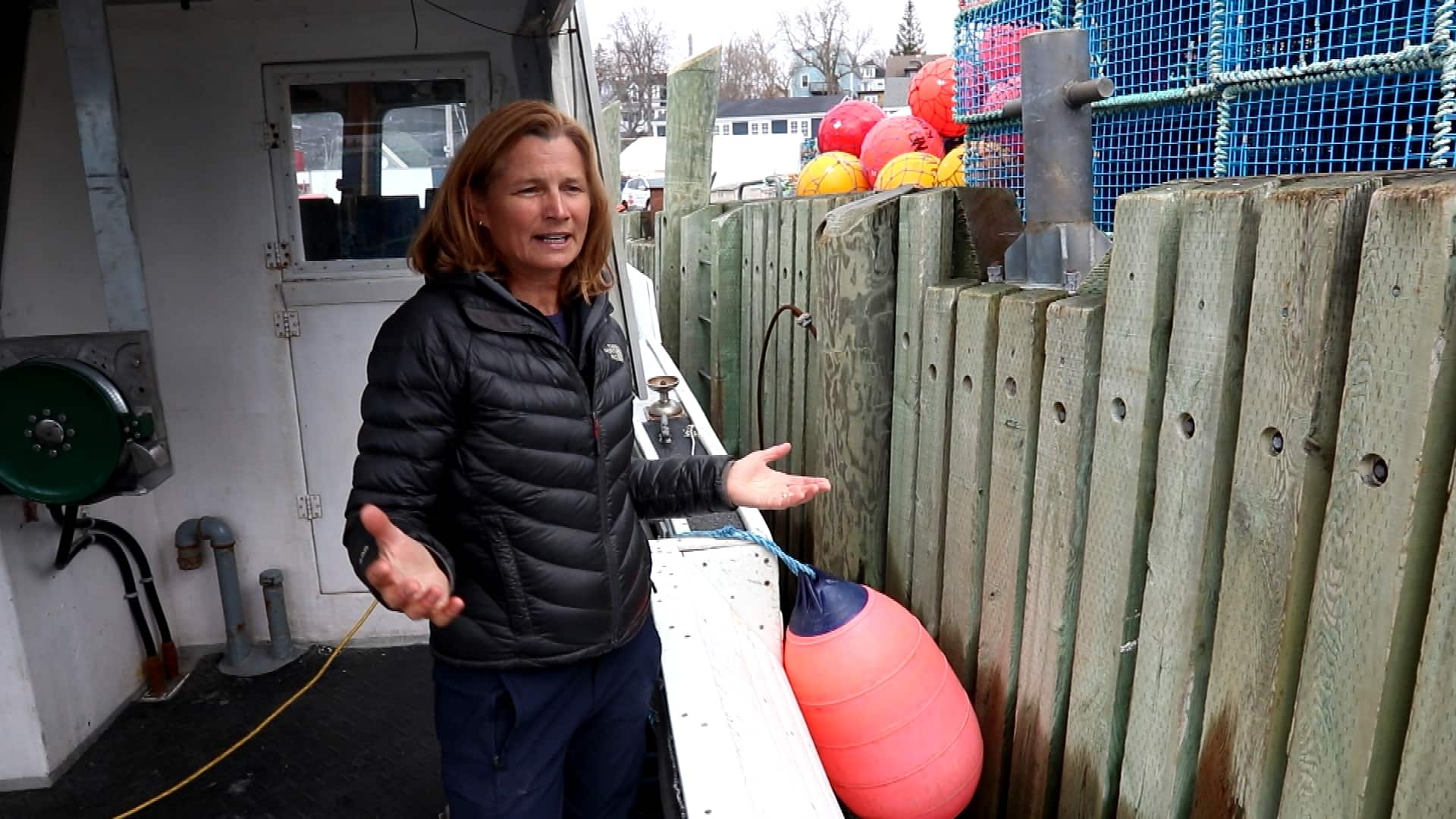 Born to the sea

Atkinson herself was born to this life.

She grew up in the fishing village of Cape Sable Island, which sits at the southwestern tip of Nova Scotia and is hugged by the water on all sides. Her grandmother Nellie built a career at a shipyard, while her father was a fisherman and made Atkinson one of his crew.

That first summer trawling for tuna hooked her, but didn't prepare her for the winter.

I had a guy shout to me … 'You should be home in the kitchen doing the dishes,' and I don't think he was joking, and I wasn't very happy about that.- Gail Atkinson, captain of the Nellie Row

"Lobstering was a rude awakening to be completely honest," she said, laughing. "It was cold, and I was sick. But I liked the challenge of it, so I stuck it out."

Other challenges have been less rewarding.

"Way, way early — back in the '90s when I first started — I had a guy shout to me … 'You should be home in the kitchen doing the dishes,' and I don't think he was joking, and I wasn't very happy about that," she said. "That was ages ago, about 20 years ago now, but I never forgot it."

Things escalated when she got her own boat in 2015. Atkinson found that someone had shot the balloons marking some of her traps and cut the lines on them, hauling off her gear.

"Well my first season, I think maybe I was getting a few warning shots across the bow, so to speak — and quite literally."

But Atkinson refused to be intimidated. She said most of the fishermen know her, have fished or sailed alongside her for decades and treat her like one of their own.

Finding that community on the boat is one of the things Atkinson loves — something she hopes to pass on to the crew members she's christening this season.

With files CBC's Brett Ruskin, Kayla Hounsell and The Current