Lobster season in southwestern Nova Scotia may be best in decade

A lobster boat captain says this fishing season was "a long time coming" after a number of lean years. 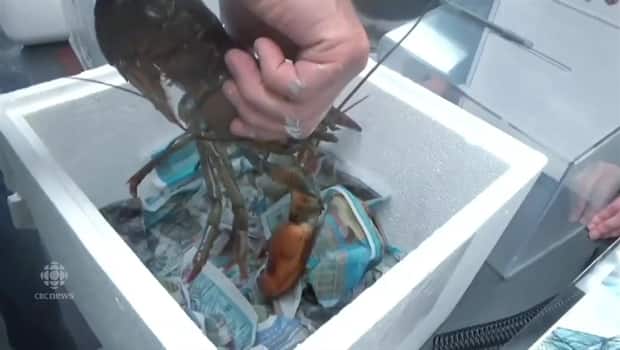 Lobster rescued from Ontario store and flown back to Nova Scotia

4 years ago
0:56
A vegan woman shipped the lobster via UPS to a volunteer in Nova Scotia who released lobster back into the ocean 0:56

A lobster fisherman in southwest Nova Scotia says this season, which ends at midnight tonight, may have been the best in a decade.

Bernie Berry, captain of the lobster boat Ready To Go and president of the Coldwater Lobster Association, said it's too soon to calculate official landing numbers.

But he estimates fishermen in the two lobster fishing areas that make up southwest Nova Scotia — from Halifax all the way down the South Shore to just south of Digby Neck — likely landed almost 75 million pounds of lobster this season.

"It's been a long time coming."

"There was a few lean years there, not of our doing, it's just we got caught up in global circumstances and it was really tight there for three or four years," he said.

"Everybody can breathe now. You know, they could live a little bit more comfortably."

During the six-month season, which began the last Monday in November and ends tonight, there are estimates fishermen in Berry's lobster fishing area, number 34, landed approximately 55 million pounds of lobster.

Not only were landings up, but the price of lobster was up too. It peaked at $6 a pound at the beginning and the end of the season, with only a slight dip at the half-way point. Berry compared that to 2008 when the world economic crisis forced lobster prices down to $3 a pound.

An "exceptionally fine" December meant a lot of fishing days with few interruptions due to storms, he said. In general, warmer water means more larvae are surviving and fishermen are finding more full-sized lobster on the ocean floor.

The price of diesel has decreased steadily in the last few years which makes it cheaper for lobster fishermen to fuel their boats, Berry said. Plus, the low Canadian dollar made it more attractive for international buyers to invest in Canadian products.

Demand is up in the U.S., Europe, and Asia, Berry said, especially in China, where the growing middle class is looking to buy more lobster products.

The entire community benefits from a lucrative season, Berry said. In many of the rural communities in southwest Nova Scotia, "lobster's the life-blood, you know, the economic driver — and so goes lobster, so goes the local economy."

Fishermen will be able to buy more gear and better-quality gear, in preparation for next season, he said.

Berry said he doesn't have any particular plans to celebrate the end of a great season except relax and watch the hockey game.