Two of the four boys who went missing Thursday evening, prompting a search of the woods surrounding a home in Hubley, N.S., say they have learned their lesson. 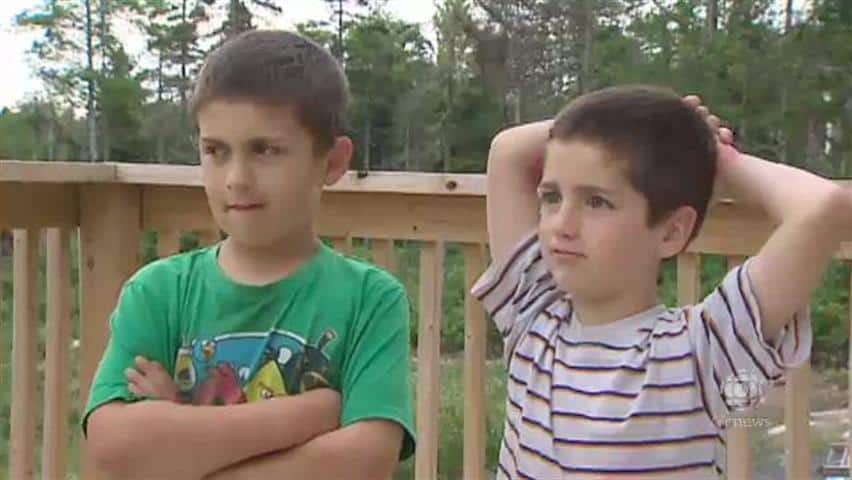 7 years agoVideo
1:33
Two of the four boys who wandered too far into the woods during a game of hide and seek say they have learned their lesson. 1:33

Two of the four boys who went missing Thursday evening, prompting a search of the woods surrounding a home in Hubley, N.S., say they have learned their lesson.

Enos and Leo Azisllari, ages seven and five, said they were just playing a game of hide and seek with two neighbour boys when they wandered a little too far into the woods.

The four boys, ages four to seven, were reported missing from a house on Telford Lane at about 5:30 p.m.

RCMP and a canine unit combed the woods, searching for the young boys presumed missing in the woods in Hubley, north of Highway 103.

Luckily, the four were spotted by one of the ground search and rescue members on the way to participate in the search. They were spotted at around 7 p.m. after they emerged from the woods near Exit 4 on Highway 103 and brought home to their families.

Egla Azisllari, is the mother of Enos and Leo, said her boys don't normally wander off.

"It was quite stressful, I almost didn't want to believe this, that they were lost. I kept thinking ‘They’ll come back, they'll come back,’" she said.

"It was beyond joy, such a relief," she said.

The boys weren't worried, though. They told their mom that "it was a lot of fun."

She said she’s thankful to everyone in the neighbourhood who dropped everything and went searching for the boys.

"I would like to, extremely like to thank the RCMP, the police and the search and rescue and everybody that came out to help," she said.

"I was just glad. No, I wasn’t mad. They’re boys, I know I’m not going to get rid of them that quick," said Azisllari chuckling.

A man who went into the woods near Hubley looking for the boys also got lost in the woods, but he was found safe around 8:30 p.m.

The spot where the boys were found is located more than two kilometres away from where they went missing.