The NSLC has sold marijuana to its very first customer

Halifax massage therapist Alicia Wright is the first person in Nova Scotia to buy legal recreational marijuana, as Canadians finally find out what legalization looks like after 95 years of prohibition.

A Halifax massage therapist was the first person in Nova Scotia to legally buy recreational marijuana, picking up some rolling papers and pot at a Halifax store Wednesday morning as Canadians finally discovered what legalization looks like after 95 years of prohibition.

Alicia Wright was handpicked by the Nova Scotia Liquor Corp. to be the first person to buy legal weed at the Clyde Street location before the official opening. She jumped the queue ahead of the handful of people lined up since around 7 a.m.

"I'm probably going to consume in a celebratory way but not until after work tonight," she said.

NSLC stores selling marijuana opened at 10 a.m. The lineup at the Clyde Street location in the city's downtown stretched down the street.

By 5 p.m., NSLC reported it sold $393,000 worth of cannabis. The busiest locations were the Clyde Street store and the Sydney River store.

Beverley Ware, a spokesperson for the NSLC, said some locations have run out of certain strains — but none has run out of cannabis.

Musician Ashley MacIsaac lined up outside Cape Breton's only NSLC store selling pot starting at 9:30 p.m. Tuesday. He was joined by a Glace Bay man shortly after midnight and a few more people Wednesday morning. 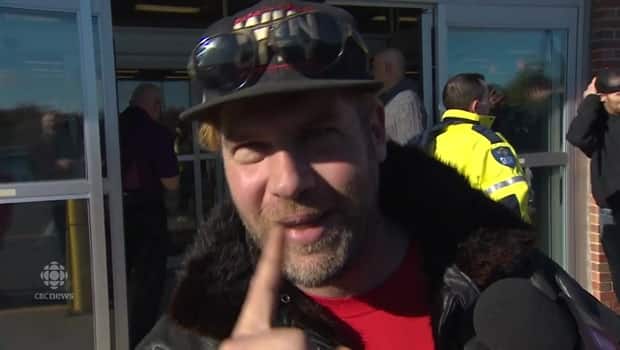 2 years agoVideo
0:57
Fiddler Ashley MacIsaac was the first to buy legal cannabis in Cape Breton on Wednesday. He discusses what he bought. 0:57

Shortly before 7 a.m., there were just a few people lined up waiting for the province's only cannabis exclusive NSLC location on Clyde Street.

Joseph Brown was first in line.

As the sun rose at the Joseph Howe Drive location in Halifax, Daniel Moore and his friend were the first two people in line.

"I'm here for this historic day in Canada. It's very exciting," he said.

Moore was anticipating a very big lineup but was happy he was the first there.

In Halifax on Tuesday night, people ushered in the cannabis milestone with a Countdown to Cannabis concert at The Marquee. Matt Mays was the headliner.

Shortly before midnight, one woman stood outside the venue to enjoy one last illegal joint. She called the moment "bittersweet," and said pot had long brought people together in a "weird instant community," something that will likely change with legalization.

In the first hour of opening, customers at the NSLC branch in Truro were asked to line up outside because the marijuana section of the store was so busy. People looking to only buy alcohol could skip the line and go straight inside.

In Nova Scotia, legal cannabis can be purchased at 12 locations, or online through the NSLC's website using a cannabis card.

Although the online store went live starting at 6 a.m., customers needed a special access code that was only available when stores opened.

You'll need an ID for that in order to prove you are over 19 years old, which is the legal age to possess and use pot in Nova Scotia.

The provincial agency has 52 strains of cannabis in its inventory, and will sell pre-rolled joints and loose-leaf pot. It plans to sell oil and seeds at a later date.

Depending on the strain, the NSLC is selling marijuana for between $6.33 and $15 a gram.

The Senate passed the contentious legislation on June 19 to legalize cannabis Oct. 17, several months after the government's initial target date.