Last man out after 1958 Springhill mine disaster dead at 95

The last man to emerge from the ground after the 1958 Springhill mining disaster has died at age 95.

"He was just a treasure to the community. He started working in the mines when he was 14 years old and even after '58, after he was trapped eight-and-a-half days, he works 10 more years in the last working mine that was in Springhill," said Tony Somers, a tour guide at the Springhill Miners Museum.

While Pepperdine would occasionally talk about the 1958 disaster, Somers said it wasn't something he enjoyed.

In a 2008 interview with CBC News, Pepperdine recalled what happened leading up to the bump.

"There was a bang in me ears it threw me back quite a ways, my face blew up like a balloon," Pepperdine told CBC News "And you couldn't see nothing for stone dust, your light shone through just like a fog."

He sat in the dark for more than eight days without food or water, with the stench of corpses hanging in the air.

"I didn't think I would last it, I was pretty well gone," Pepperdine said. "I thought we all had the biscuit but I was laying there and I think the eighth day or so I seen this bright light in my eyes one of the rescue men."

A love of mining

But Pepperdine always talked about how much he loved working in the mines, Somers said.

"He loved the brotherhood, the friendships they would form underground. Miners had a special brotherhood and friendship among them. They felt so comfortable underground," he said.

"In 2008, he did an interview and he said he would go back underground today."

Somers said Pepperdine used to come to the museum often and would tell stories about his time working in the mines.

"He's just one of the toughest men and strongest and bravest and great sense of humour. Just always making faces at kids to make them laugh. If Springhill had a Jim Carrey, it would be Herb with the faces he would make," he said.

Somers said the museum will honour Pepperdine by continuing to share his story during tours. 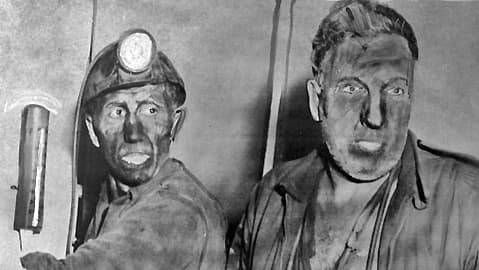 Live from the Springhill mine pit head

1 year agoVideo
28:03
CBC-TV broadcasts live from the site of the 1958 Springhill mine explosion, where rescuers are moments away from freeing 12 trapped miners. Photo credits: Fednews telephoto/Library and Archives Canada/PA-177106 28:03

With files from Kevin Harvey