Irving Shipbuilding hopeful contract to be signed this year

The President of Irving Shipbuilding was in Halifax Friday and said he's hopeful the national shipbuilding contracts will be signed before the end of 2012. 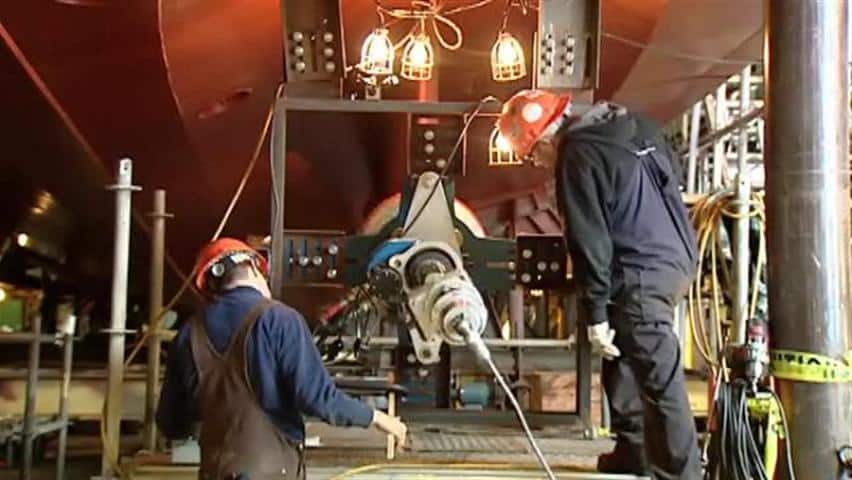 8 years agoVideo
1:49
The President of Irving Shipbuilding was in Halifax Friday and said he's hopeful the national shipbuilding contracts will be signed before the end of 2012. 1:49

Irving has announced the engineering firm that will re-design part of the Shipyard in Halifax in advance of the national shipbuilding contracts.

Hatch Mott MacDonald has 40 employees in Nova Scotia. That number is expected to grow to 65.

The modernization plan will cost about $300 million and provide many new upgrades. It will be mostly paid for through a $260 million interest-bearing loan from the Nova Scotia government.

Steve Durrell, the President of Irving Shipbuilding said he expects the work will begin in the spring of 2013 and give a big boost to the local economy.

"The estimate for both engineering and construction is some 2.3 million person hours which translates into some $73 million in wages."

The workers at the Halifax Shipyard are busy. But the steel that is currently being cut is for Coast Guard vessels. Hundreds of new jobs building navy ships were promised as early as this year. But now the construction of offshore and Arctic patrol ships appears to be more than two years away.

"Knowing what we see for the vessels and seeing for the design requirements and mitigating the risk associated with the design, we see 2015 as the realistic time to cut steel," said Durrell.

But that date could change depending on how the design work proceeds.

"We need to start engineering in January in order to cut steel in 2015," said Durrell. "If we get delayed a month it will delay the program a month."

The delays are disappointing for shipyard workers.

While workers are questioning the delays, Durrell emphasized the project is moving ahead behind the scenes. When the $300 million re-design of the Halifax Shipyard is complete there will be three huge new fabrication sheds. There will also be a new pier and a new launch facility to help get the new ships into the water.

Durrell said the shipyard work will generate $73 million in wages for local workers. It will be paid for by a $260 million forgivable loan from Nova Scotia taxpayers, money Durrell said they won't touch until the refurbishment begins.