Irving gets $304M from N.S. for shipbuilding

Irving Shipbuilding Inc. is getting $304 million from the Nova Scotia government to help prepare for the construction of the Royal Canadian Navy's next fleet of vessels.

Largest single investment ever in N.S. for job creation 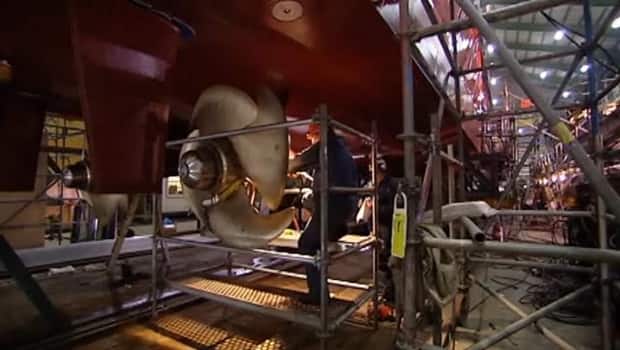 9 years agoVideo
2:07
Irving Shipbuilding Inc. is getting $304M from the province for shipbuilding. 2:07

Irving Shipbuilding Inc. is getting $304 million from the Nova Scotia government to help prepare for the construction of the Royal Canadian Navy's next fleet of vessels.

The government's assistance package, announced Friday, includes a forgivable loan worth up to $260 million and a repayable loan of $44 million for human resources, technological and industrial development.

Jim Irving, the CEO of Irving Shipbuilding Inc., made no apology for accepting taxpayers' money.

"We've been here a long time and we didn't always make money in the shipbuilding business, I can tell you that. The business was tough but we stuck with it."

Irving said his company needed provincial support to be the winning bidder for the federal $25-billion shipbuilding contract to build 21 combat vessels.

The contract is expected to maintain a steady flow of work at the Halifax Shipyard over the next 20 to 30 years.

But Kevin Lacey of the Canadian Taxpayers Federation questioned the government's decision to give more public funding to a company that has landed the lion's share of the largest military procurement in Canada's history.

"Taxpayers are already paying this company $25 billion for these boats," Lacey told The Canadian Press.

"They don't need another $300 million from Nova Scotia taxpayers."

Lacey also took issue with the government's characterization of the announcement as a loan.

"The company, at the end of the day, does not have to pay this back, so it's just public relations to call it a loan," Lacey said of the $260 million forgivable loan.

Irving Shipbuilding Inc. plans to spend between $5 million and $10 million annually on capital improvements to its operations over the next 30 years.

The $260-million loan will also finance the expansion of the existing yard, and the construction of a large new facility next to where ships are now being built.

Premier Darrell Dexter told reporters he doesn't think he'll have a hard time convincing taxpayers of the investment's worth.

"It is one of the largest investments that the province has ever made but it is also the single largest return on investment that we have ever had," Dexter said Friday.

"We went up against provinces and economies much larger than our own. We won on the basis of the bid that we were able to put together jointly and it is about the future of our province."

According to predictions from the Conference Board of Canada, the shipbuilding contract is expected to result in about $2.8 billion in additional revenue to the province over the next 19 years.

The province has said the project will create an additional 11,500 jobs and increase Nova Scotia's GDP by almost $900 million during peak production years.

"This is a tremendous opportunity that we managed to help realize."