Blockades were set up at both ends of the Saulnierville, N.S., wharf overnight on Friday. Chief Michael Sack of Sipekne'katik First Nation said the blockades are in response to intimidation against Indigenous lobster fishermen.

'We're just here to exercise our right, we don't want to fight with anyone,' says Chief Michael Sack

The meeting, which will take place via Zoom call at 7 p.m., comes amid days of tension between Mi'kmaw fishermen who recently launched their own lobster fishery and the commercial lobster fishery.

Indigenous fishermen set up blockades at each side of the wharf in Saulnierville, N.S., overnight on Friday.

Sack said the blockades, made of lobster traps and rope, went up overnight in response to commercial fishermen trying to intimidate and start fights with Indigenous fishermen and their supporters.

"We're just here to exercise our right," said Sack. "We don't want to fight with anyone and we ask the commercial fishermen to please respect that."

The Mi'kmaq-regulated lobster fishery was launched by Sipekne'katik First Nation earlier this week.

It came 21 years after a landmark Supreme Court ruling in the case of Donald Marshall Jr., which recognized First Nations' rights to earn a moderate living from fishing.

Dozens of commercial lobster fishermen turned out to oppose the new fishery because they consider it to be illegal. Up to 50 lobster boats from numerous non-Indigenous fishing communities circled the first Mi'kmaw boats to push off and drop the traps.

Bleu Rae, a supporter of Indigenous fishermen, said she witnessed some of what happened on Thursday night.

"We came out and were shocked to see ... it looked like a highway of boats surrounding a couple of boats who were just trying to fish, trying to intimidate. I'm really tired of people not understanding this is Mi'kmaqi, this is unceded, this is treaty," Rae said.

Sack said the atmosphere at the wharf on Saturday had been "very good" compared to the last few days.

He said Indigenous fishermen were hoping to get back out on the water later today once the wind died down. He's curious to see if any of the gear that was set on Thursday is still intact.

Sipekne'katik are consolidating all their fishing vessels from the area at the Saulnierville wharf. Sack said they'll keep it blocked until Fisheries and Oceans Canada recognizes their treaty rights.

Hundreds of people who support the Indigenous fishermen streamed into the area throughout Saturday. Sack said they're from First Nations communities from around Atlantic Canada.

A small number of commercial fishermen could be seen hanging around outside the blockade.

Sack said the fight isn't with the commercial fishermen but with the federal government and he's encouraging his community to recognize that.

"There's no need for a joint meeting with the commercial industry. They have their own battle with the government and we do as well. It's completely separate," Sack said.

On Friday, Jordan called for both sides of the fishery issue to come together for a meaningful discussion.

A lobster trap wall was erected outside the Fisheries and Oceans Canada office in Meteghan.

"Those traps were placed there by exasperated commercial fishermen who know they're not being heard and they left them as a calling card for Minister Jordan that they had been there and that they're going to stay," Sproul said.

Sproul said his organization and its ally groups support First Nations fishery access rights and he said the issue is with Jordan and the Trudeau cabinet and their "unwillingness to enforce Canadian law." He said he's shocked Jordan wasn't at the wharf on Saturday.

"I can't imagine there's a more important portfolio on her table today and I would ask her to use her power to create a dialogue between Indigenous and non-Indigenous fishery leaders so we can move forward in a peaceful way," he said.

"She's the only one left in Canada who can bring everybody to the table and that's where we want to be."

In a statement on Saturday, a group representing commercial fishermen released a list of demands to Fisheries and Oceans to "keep the fishery healthy."

The demands included an immediate stop to out-of-season commercial fishing, more funding for enforcement of regulations by the Government of Canada and for government and Indigenous leaders and fishing organizations to work together to manage the resource.

"Commercial fishermen not do not want to battle with the First Nations Aboriginal communities. Our goal is to let the Department of Fisheries and Oceans and the Canadian government know that they need to do their work," Ruth Innis, a spokesperson for the Maritime Fishermen's Union, said in an interview on Saturday.

'We want to work with First Nations'

Innis said illegal fishing has been going on for years and "the guys on the ground finally got fed up." She said it is not a race issue.

On Saturday evening,  Martin Mallet, another spokesperson for the Maritime Fishermen's Union, said he was in touch with Jordan and was told she's talking to all groups involved to try to find solutions. Mallet said he reiterated the group's demands and the ball is in the minister's court now.

In a video posted to Facebook on Friday, an RCMP officer could be heard telling those protesting the Indigenous fishery that the Indigenous people have a right to fish.

The officer, whose name was not in the video, said he had been "doing this 19 years, this is not my first fishery dispute" and that he knows the arguments and feelings on both sides.

"Whether we like it or not, they're allowed to go out and fish," the officer said. "You guys want to try to go out and stop it, try to slow it down, I get that — but I'm not going to let you hurt anybody."

Two Mi'kmaw senators released a joint statement on Saturday calling on the federal government to uphold the Marshall decision.

"Our people earnestly seek to have the means to meet our day-to-day needs for basic necessities like food, clothing and housing – and to address the legacy of colonialism and assimilation," Dan Christmas and Brian Francis said in the statement.

"These outcomes simply cannot be realized if the federal government continues to make the exercise of our right to fish contingent upon the signing of time-limited Rights Reconciliation Agreements which have been largely unsuccessful." 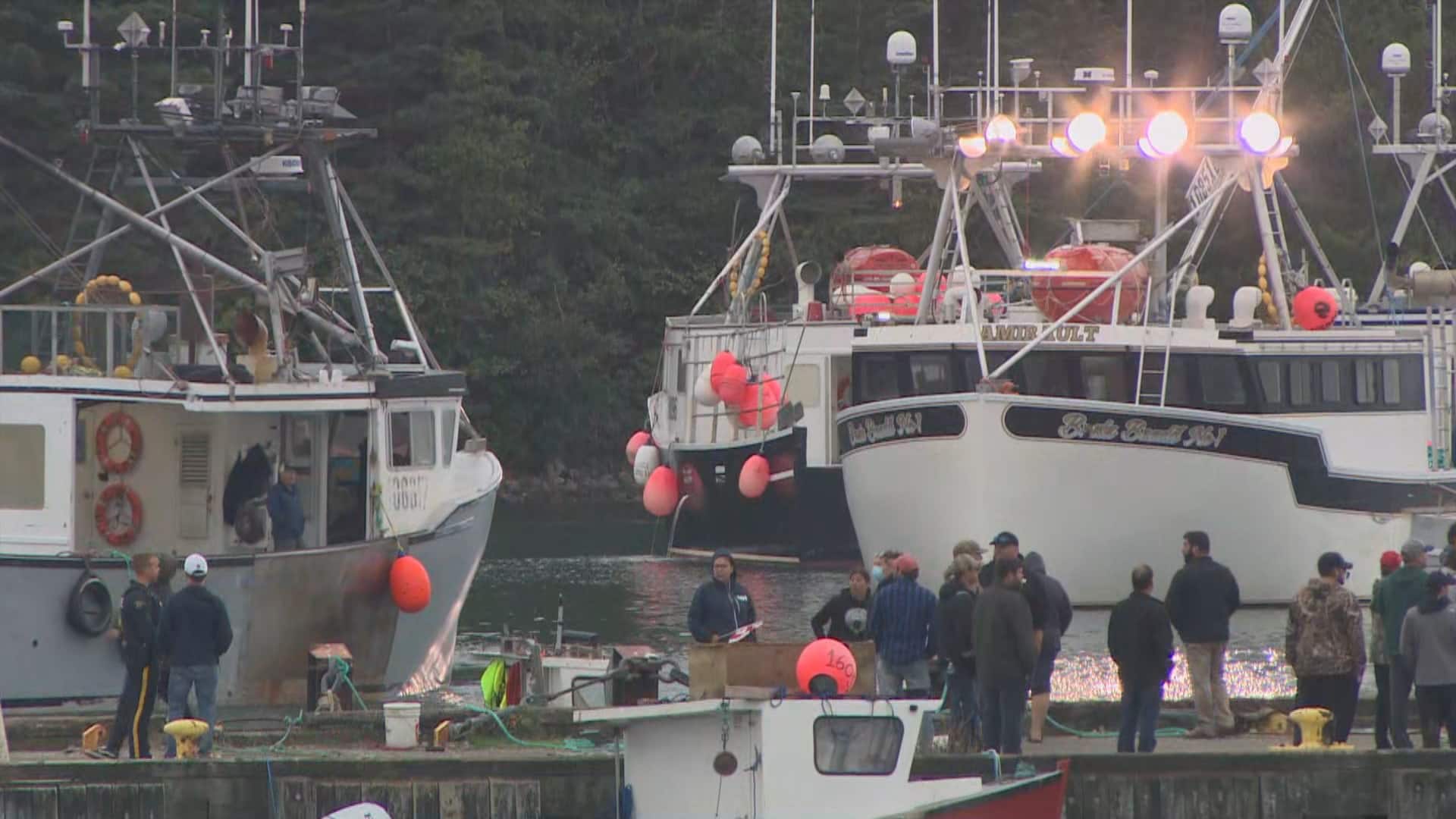 2 arrested amid tension over Indigenous lobster fishery on Friday

1 month ago
2:39
RCMP made two arrests on Friday on a wharf in southwest Nova Scotia where tempers flared and tensions remain high over a Mi'kmaq lobster fishery. The Sipekne'katik band has a treaty right to run their fishery outside of DFO rules and that angers non-Indigenous fishermen who say the stocks and their livelihoods are at risk. The CBC's Paul Withers has the story. 2:39
MORE TOP STORIES

With files from Taryn Grant, Nic Meloney and Genevieve Normand