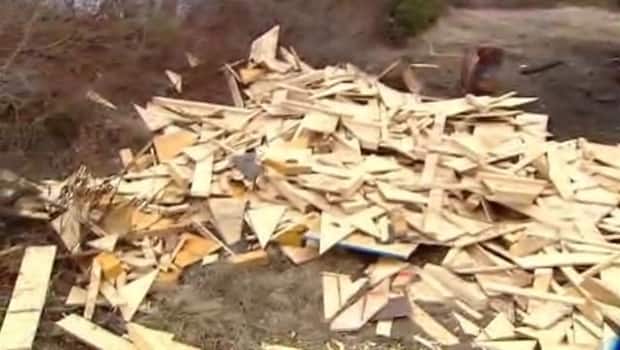 9 years agoVideo
1:57
Residents of River Drive in Lake Echo say they're fed up with illegal dumping on their road. 1:57

Pete Julian said almost every day, he and his family members have to clean up trash that's dumped on the River Drive, which runs past the lake house where they live.

"This is all new construction material," said Julian, gesturing to a pile of wooden pieces adjacent to Otter Lake.

"This was dumped within the last 74 hours."

Illegal dumping gets around the cost of hauling waste materials to legal dump sites and then paying tipping fees.

"Every day we come down this road for a walk, so this is a daily thing for us. Just up the road, there's some fresh stuff that was dumped within the last 24 hours," Julian said Wednesday.

He said the end of River Drive is also a popular spot for hikers, fishermen and partiers, who have been known to light fires with the dumped material.

"They will make all their little fire pits. We have found tires and vehicles back here and as they burn, as you know, all the toxins are going to go right into this lake," said Julian.

"It's a shame to see this because this is starting to really get to us down here in the community."

Lucy Chrzaszcz, Julian's neighbour, said she's also worried about the risk of fire as summer comes on and the wind on the lake comes up.

She said she has voiced her concerns before, but complains to the municipal and provincial governments have resulted in frustration and confusion over who is responsible for the road.

"There have been papers submitted years ago that they have no records of," Chrzaszcz said Wednesday.

"It's just been a constant passing the puck."