The storm Dorian lashed Nova Scotia on Saturday, sending trees tumbling onto cars, blowing roofs off and toppling a massive crane onto an under-construction building amid powerful winds and torrential rain.

Powerful winds and heavy rain caused damage throughout the province 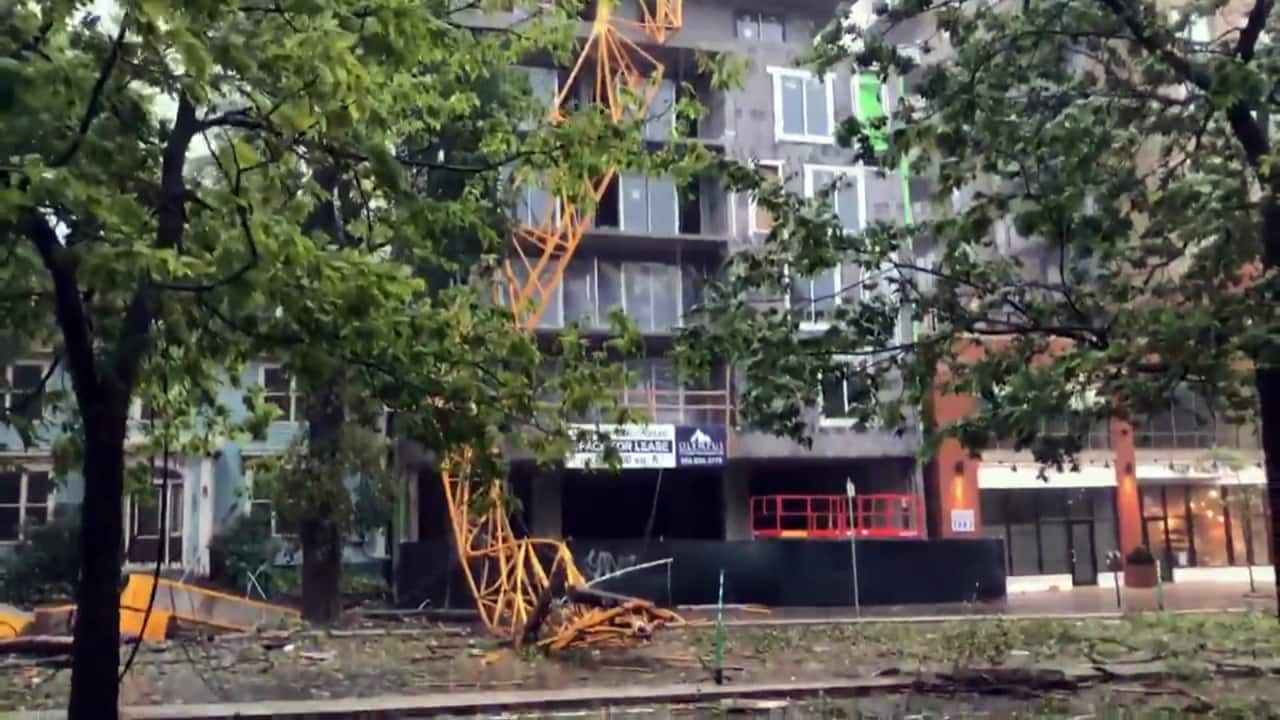 Crane collapses in Halifax due to heavy winds from Dorian

1 year ago
0:37
A construction crane has collapsed off a building in Halifax as the city is pounded by heavy winds from Hurricane Dorian. 0:37

Dorian lashed Nova Scotia on Saturday, sending trees tumbling onto cars, blowing roofs off and toppling a massive crane onto an under-construction building amid powerful winds and torrential rain.

Halifax bore the brunt of the storm Saturday afternoon, as it moved into the region as a Category 2 hurricane with winds gusting up to 141 km/h.

Dorian had diminished to a post-tropical storm by about 7 p.m. Saturday when it made landfall in Halifax.

There was a lull in the storm at that time, however winds and rain were expected to pick up again in the evening, as the storm continued it track across Nova Scotia.

By 9 p.m. Saturday, 131 millimetres of rain had fallen in Baccaro Point, N.S. — on the province's southwestern tip — while 70 millimetres was recorded at Halifax Stanfield International Airport.

On South Park Street in downtown Halifax, a construction crane collapsed onto a building under construction and cracked in half as it hit.

Fatema Ali, 22, said she watched from a large window in her bachelor apartment as the yellow crane across the street teetered in the wind. 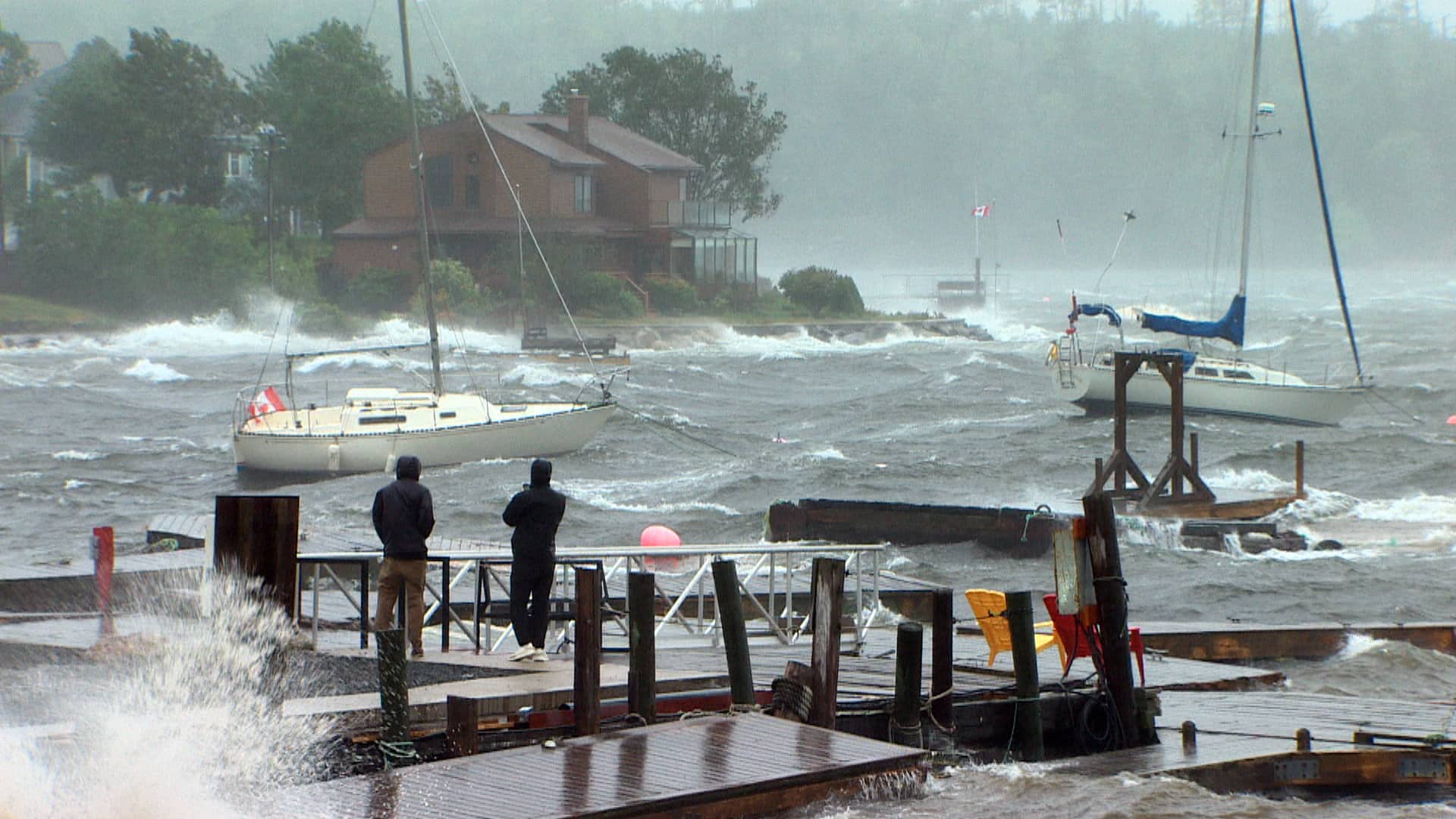 1 year ago
1:16
Nova Scotia is being battered by strong winds and heavy rain as Hurricane Dorian arrives in the province. 1:16

"I was so shocked," said Ali, who caught the dramatic scene on video. "My hands were shaking."

Ali said she was thankful the crane did not fall onto a nearby building that was occupied. She said the incident was very upsetting.

"I'm glad that nothing happened to anyone," said Ali. "I was telling people that this should have been removed before the hurricane. Even if people were walking around, you never know, something could have happened."

Halifax police confirmed there were no injuries.

A roof on a building on nearby Queen Street blew off in one large section and landed on several cars.

The company had 1,000 personnel — including 600 line technicians — at the ready to deal with the storm's aftermath; however, they were standing down until Dorian began to wane. Crews from other provinces were also helping out.

On Prince Edward Island, more than 51,000 customers were without power Saturday evening. Winds were expected to gust up to 113 km/h and more than 100 millimetres of rain was expected to fall in some areas by Sunday morning.

Lights were also out for roughly 78,000 in New Brunswick Saturday evening, where heavy rain and high winds were flooding roads and uprooting trees. A number of roads in Saint John were closed due to flooding.

Dorian was then expected to move into the Gulf of St. Lawrence, bringing powerful winds and rain to western Newfoundland Saturday night into Sunday.

Massive trees were uprooted and resting on homes in the Halifax area, their roots exposed as they lifted up the surrounding sidewalks.

Stephen Brown hunkered down in his home in Halifax's north end as winds started to pick up. He received a message around 2:30 p.m. from a neighbour saying there was a 10-metre tree straddling his pickup truck.

"It has literally gone right through the truck," said Brown, 51, adding that the tree landed across the bed of his company's truck, narrowing missing the cabin.

"It's kind of scary because what we're hearing is that the wind is going to continue to build for at least another three or four hours ... If trees are coming down at the early part of the storm, it's anyone's guess what's going to happen as we get through it."

Boats were smashing against the shoreline in many coastal areas of the province.

In Herring Cove, N.S., waves that were pounding against a breakwater appeared to be reaching 15 metres. People who live in the area said they had never seen a storm surge like the one Dorian was bringing.

The pounding storm surge left Government Wharf in Herring Cove in ruin. Locals said several other wharves were also destroyed, and the roof of a shed was floating in the cove.

Herring Cove was also hit hard by Hurricane Juan in 2003.

During a media conference Saturday evening, the Nova Scotia Emergency Management Office said there had been no significant injuries or deaths related to the storm.

Ralph Goodale, Minister of Public Safety and Emergency Preparedness, said in a statement the Canadian Armed Forces were mobilizing to deploy to assist with recovery after the storm moves through.

Up to 700 military members in Atlantic Canada were preparing to deploy as early as Sunday morning.

"We are fully committed to the task at hand to support Nova Scotia Emergency Management and will move quickly and with purpose to protect Canadians and mitigate the effects of Hurricane Dorian," Lt.-Gen. Mike Rouleau, the commander of the Canadian Joint Operations Command, said in a news release.

"As members of your community, this storm is our adversary just as much as it is yours."

Officials said 150 people were evacuated from downtown Halifax buildings. Many were staying at three emergency shelters.

Peter Andrews of Halifax Regional Fire and Emergency was urging people to remain in their homes and off the roads, as curious bystanders can sometimes impede upon emergency operations.

"At this point we have not closed the streets to the public, but we are considering doing so," he said.

"Onlookers going down to the coastline areas and observing the general state of what's going on out there is impacting our emergency operations and our ability of our emergency responders to move throughout the city."

Cpl. Jennifer Clarke said for the most part, people appeared to be staying home during the storm. But she said officers had to be sent to Peggys Cove, N.S. ⁠— a popular tourist attraction ⁠— on Saturday afternoon to deal with storm watchers.