Nova Scotians are coming together this weekend to remember those who were killed in last week's mass shooting. Although there are orders to keep physically distant because of COVID-19, many are finding ways to pay their respects to the victims.

A week after one of Canada's deadliest mass killings, Nova Scotians are continuing to find ways to grieve and support one another.

But coming together to grieve has been particularly challenging during the COVID-19 pandemic, where people are required to keep their distance and stay in their homes.

"By our nature as human beings, ritual is coded into our DNA," said Father Bill Burke of St. Marguerite Bourgeoys Parish in Sydney, N.S.

'We're finding ways not to be isolated'

He said many people look to gathering together as a way to find meaning in these kinds of tragedies. Being unable to do that complicates things, he said.

Some families are holding online funerals, while several churches have also held special online services to remember the victims. The funeral for Lisa McCully, a teacher, was livestreamed on Sunday afternoon.

But Burke said he's hopeful that Nova Scotians are able to lean on each other through social media, citing Friday night's vigil as an example.

"[It] was so profoundly comforting and, at the same time, heartbreaking," he said.

He hopes people won't get stuck on what they can't do right now, such as getting together with neighbours and loved ones.

"I think this is going to last for a while, so we have to do the hard work and the creative work of, 'What can we do,'" he said. "We're distant from each other, but we're finding ways not to be isolated from each other."

Making sure resources are there in the long run

Serena Lewis, a bereavement, grief and wellness co-ordinator with the Nova Scotia Health Authority, said it's important to make sure there are resources available to help the community in the long run, not just for a few days.

She said a big part of her work so far has been helping community members who need to grieve. Memorial sites have been established in many communities. 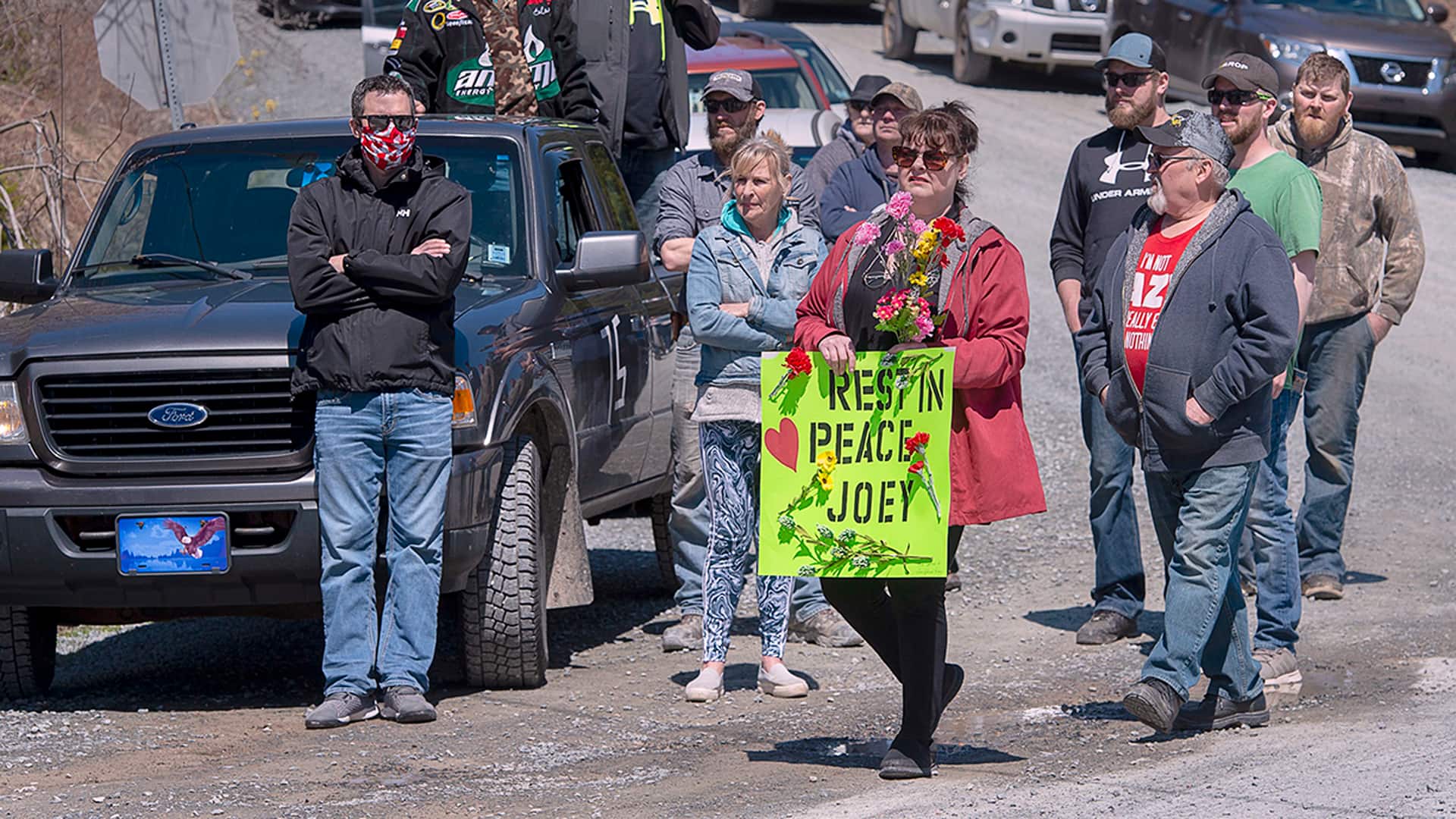 7 months agoVideo
2:03
Friends and families have found ways to come together to honour the victims of last week’s mass shooting in Nova Scotia despite physical distancing restrictions. 2:03

People are able to bring flowers and pay their respects while still practising physical distancing.

"Anger is part of this," she said. "We're angry. Our lives have been disrupted. We've lost somebody very important to us, and anger will always be part of this process for people. Finding healthy ways to process that anger and sadness and disbelief — that's all part of the grieving process that we work with people."

Lewis said grief counsellors began last Sunday by reaching out to community members to check in. She said everyone from Victorian Order of Nurses (VON) staff to teachers to health-care workers have stepped up to help the community in "all kinds of creative, beautiful ways."

She said there's also been a lot of work to make sure victims' families have the resources they need.

"Some of those families are needing support around just getting stabilized homes again," she said. "So that's the first pieces, their basic need, and making sure people have what they need. Understanding what we can do for funeral rituals, that's been a difficult piece."

Roy Ellis, a grief counsellor in Nova Scotia, said many people who lose a loved one through violent means often experience a different "species of grief," something he refers to as anguish.

He said anguish is a full-body experience, which encompasses anger and rage when harm has been put on a community.

But he also said it's important that people eventually begin to move past those feelings of rage in order to heal.

"I think that's the first thing we want to do is be kind and gentle with ourselves," he told CBC Radio's Atlantic Voice. "If we instead concentrate on the love that we have with our lost loved ones, the beauty of their lives, the quality of the relationships that we shared and allow our brains and our hearts to connect with that material, that's sustaining. It nourishes us, it draws us back to the heart of what's important to human beings, which is connection and love."

Nova Scotians have been coming together this weekend to pay their respects to the victims.

On the Colchester-Supporting our Communities Facebook page, members are sharing photos of hearts, candles, blue lights, Nova Scotia tartan and flags as well as poetry and songs.

On Sunday evening, a final route tribute will be held for victims Heather O'Brien and Kristen Beaton who worked for the VON.

The route will begin at Blake's Pumpkin Jungle in Masstown, N.S. From there, it will go to the Tim Hortons in Debert, N.S., and then to the memorials for the two VON workers.

"It's just the way that it happened, that they were both travelling that road around the same time," said Carol Curley, regional executive director for the north and east zones of the VON in Nova Scotia. "So they both were from the area and both worked in the area.… It's just a coincidence they both happened to be on the road at that time."

Curley said the drive-by was organized by friends and colleagues of O'Brien and Beaton.

The procession will be escorted by volunteer firefighters. A moment of silence will be observed while people wear medical masks.

On Saturday night, there was a Facebook concert organized by Cape Breton country artist Drake Jensen called a Tribute to the People of Nova Scotia.

A beautiful tribute from the Cole Harbour Bantam A Wings who honoured Cst. Heidi Stevenson at a private location while practicing appropriate social distancing.<br>⁣<br>Cst. Stevenson's son Connor was a member of the team.⁣<br><br>Our hearts go out to them. ❤️<a href="https://twitter.com/hashtag/HockeyComesTogether?src=hash&amp;ref_src=twsrc%5Etfw">#HockeyComesTogether</a> <a href="https://t.co/nZNKSgaNQd">pic.twitter.com/nZNKSgaNQd</a>

A drive-by memorial in Wyses Corner, N.S., on Saturday was organized by a neighbour and family friend of Joey Webber, another victim.

Also on Saturday, a member of the Nova Scotia Kitchen Party (COVID-19 Edition) group organized a provincewide Farewell to Nova Scotia tribute. It involved people coming out on their doorsteps, lighting a candle, singing and/or playing the song on an instrument.