The Royal Canadian Navy acknowledged HMCS Athabaskan was damaged during its voyage from Ontario to Nova Scotia last week, though officials would not say how it happened, when it happened or discuss the extent of the damage.

Ship had broken loose while being towed home to Halifax from Welland, Ont. 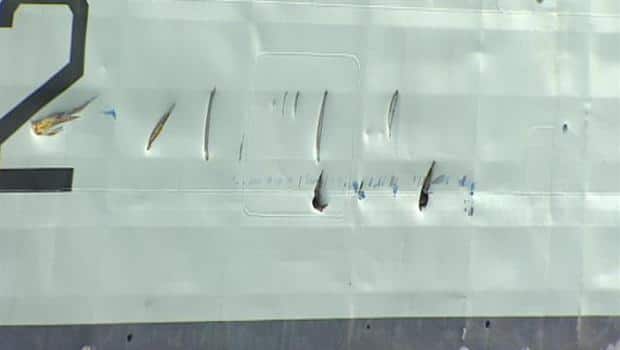 Damage to HMCS Athabaskan in 2013

8 years agoVideo
0:34
HMCS Athabaskan was damaged when it broke loose from its tow line. 0:34

The Royal Canadian Navy has acknowledged that HMCS Athabaskan was damaged during its voyage from Ontario to Nova Scotia last week, though officials would not say how or when it happened or discuss the extent of the damage.

The Iroquois-class destroyer, which is currently berthed in North Sydney, broke loose from its tow line last week and went adrift near Scatarie Island off the northeast coast of Cape Breton.

"At this time, we acknowledge that there appears to be some damage," said Cmdr. Matthew Coates. "We've seen the pictures. We have a team from Maritime Forces Atlantic, some experts, who have gone to Sydney to do an assessment of that perceived damage.

"The objective at this point is to assess the damage, determine when the ship will be safe to return to Halifax, and obviously that is contingent upon that assessment as well as weather conditions."

HMCS Athabaskan was in Welland, Ont., for a $21-million refit and was on its way to Halifax for the winter when it went adrift for several hours on Friday night.

The tow line to the 130-metre vessel was reconnected early Saturday morning with the help of a Cormorant helicopter from the airbase in Greenwood, N.S.

There are at least at least seven holes in the hull of the Athabaskan along with several dents and scrapes. It also appears the ship's frame may be warped along the waterline.

Coates would not say whether the damage occurred as the Athabaskan was adrift and would only say it happened "between the time that the tug company took it under tow and the time it arrived in Sydney."

He told reporters on Thursday: "At this particular point, I don't think one can rule out when specifically it happened. On Friday and into Saturday morning the focus was reattaching the tow.

"We are comfortable that it did not occur in the [St. Lawrence] Seaway."

'It's not significant damage'

Capt. Doug Keirstead of the Royal Canadian Navy said HMCS Athabaskan was supposed to have undergone a routine refit by the end of November last year and was expected to be capable of sailing after that work was completed at Seaway Marine and Industrial Inc. in Welland, Ont.

But Keirstead told The Canadian Press the ship couldn't return to Halifax without assistance due to maintenance delays and other problems.

"The reason why Athabaskan is not returning under her own power is because there have been delays in some of the required maintenance and further unforeseen maintenance required," he said.

Keirstead said the ship will remain in Sydney Harbour until the hull damage has been assessed and officers determine how to return it safely to Halifax to complete the refit and repair the latest damage.

Mac Mackay, who blogs about ships in Nova Scotia's harbours, said he wants to know why the Athabaskan was being towed during high winds.

"You don't see very much being towed around this time of year," he told CBC News. "Most of the towing work gets done when the weather is much better.

"Will we ever know some of the other questions that have come of out recent navy incidents? The Preserver colliding with the drydock, the submarine running aground. We'll be told something, but we won't know everything, that's for sure."

Coates said the towing company made the decision on whether the weather was appropriate for towing.

"What actually happens is the towing company provides a voyage plan which is a fancy word to say, here's how they intend on conducting the tow. The navy reviewed that, had a look at it, and was in agreement with it," he said.

"It's not significant damage, but we need to allow the experts to do that assessment and their focus is to ensure that the ship is safe to return to Halifax."