Archeologists are studying bundles of old clothing discovered in an historic Halifax house.

Three clothing items stuffed away in 250-year-old house to 'ward off ... evil' 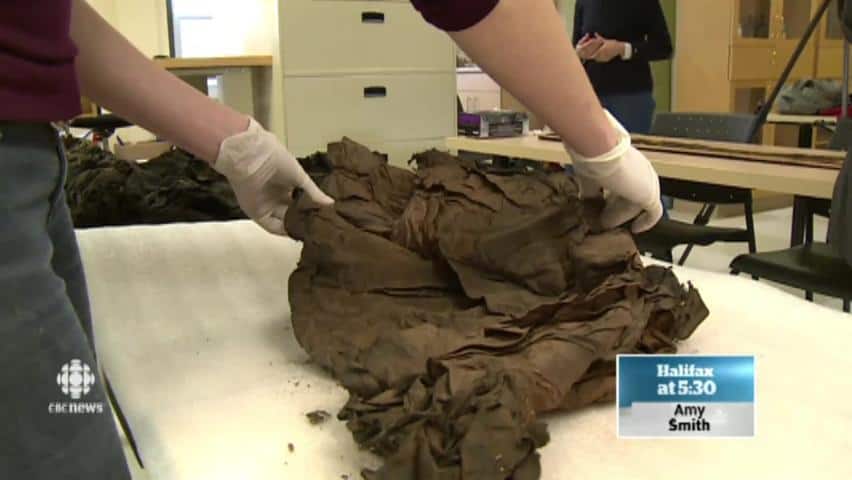 A mystery was unravelled this week.

Archeologists unrolled bundles of old clothing, discovered in an historic house in Halifax.

Laura de Boer, a senior archaeologist with Davis MacIntyre and Associates, has waited patiently for months to find out what's inside bundles of old fabric found in one of Halifax’s oldest homes.

"We've got a bit of lace here. I don't know if that was a curtain or a garment," she said as she slowly unravelled one of the bundles.

"I feel a little bit like a little kid discovering something in the attic."

The items were found in the roof of the 250-year-old Morris House during renovations in February. It's the fourth oldest building in Halifax,  the former office of prominent surveyor Charles Morris.

The bundles were tightly wrapped, blackened and a little worse for wear. Three items of clothing were revealed in the unravelling.

"Oh wow, it's a lady's jacket, I think," de Boer said as she carefully unrolled one of the bundles.

There were two jackets and a skirt, probably from the Victorian era, complete with lace, pleats, detailed buttons, boning and puffed sleeves.

For the volunteers poring over the historic haul, these largely intact garments are a fascinating find.

"It helps reinforce our argument that it's important to keep old buildings, to document them, to understand how they were constructed," said Linda Forbes, President Heritage Trust Nova Scotia.

It seems odd to find bundles of clothing stuffed away in the attic of an old house, but de Boer has a theory.

"What we see sometimes is either shoes or clothing that are deliberately deposited in sealed spaces in historic houses, particularly around windows and around chimneys to kind of ward off bad influences or evil," she said.

The clothes will be for further analysis to find out exactly how old they are. They will then likely be sent to the Nova Scotia Museum and put on display.

Slated for demolition in 2009, Morris House was saved by the Heritage Trust of Nova Scotia. The group bought the structure for $1 and joined forces with housing groups and the Ecology Action Centre to find it a new home in the city's north end. In January, 2013 it was painstakingly moved to the corner of Creighton and Charles streets.