Santina Rao appeared in court Wednesday after her controversial arrest in January at a Halifax Walmart. She says police officers racially profiled her, and broke her wrist as well as gave her a concussion during the arrest. 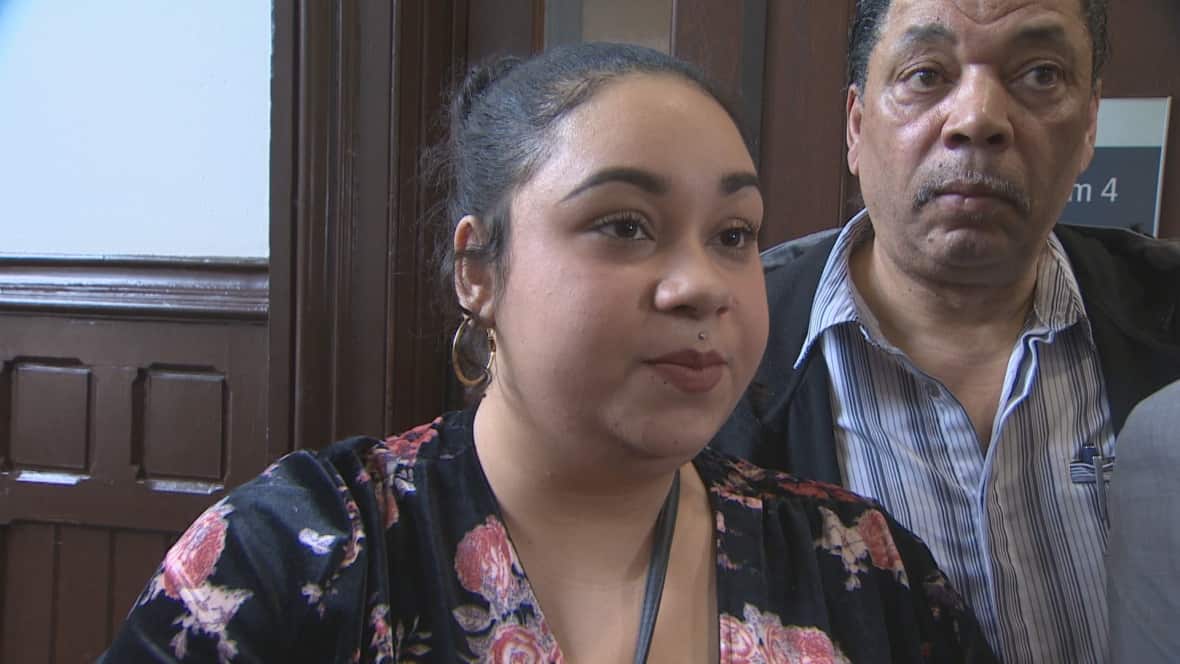 1 year ago
0:54
Santina Rao appeared in court Wednesday after her controversial arrest in January at a Halifax Walmart. 0:54

A Halifax woman who says she was racially profiled and injured during a controversial arrest at a local Walmart has had her case delayed while Nova Scotia's police watchdog conducts their own investigation.

Santina Rao, 23, appeared in Halifax provincial court Wednesday with her arm in a cast to face charges of causing a disturbance, assaulting a peace officer, and resisting arrest.

"It's about Santina, and we want to make sure some good comes out of this at the end of the day because this is something that should never have happened," Gordon Allen, Rao's lawyer, told reporters outside the courtroom.

"A situation was created when we don't believe there should have been any situation whatsoever, and it was escalated rather than de-escalated."

Woman arrested in front of children

Rao was arrested Jan. 15 while shopping with her baby and toddler in the Halifax location on Mumford Road. She has said she was approached by police officers inside the store who believed she was concealing items.

Calling it racial profiling, Rao wrote on Facebook that she had attempted to show her receipts and told the officers they could search her stroller. Rao has said she paid for electronics in one section of the store and stopped in a toy aisle on her way to ring in some produce that couldn't be weighed at the checkout where she made her first purchase.

Rao said when she became upset, the officers cuffed her without explaining why she was being arrested.

Allen said his client was surrounded by the officers and other Walmart staff, asked for her identification and detained, although she had committed no crime.

Rao was questioned further about her address and she became upset, especially when a man prevented her young daughter from coming to her, Allen said, which increased the tension and led to the situation that brought them to court.

"Police have a difficult job in trying circumstances, and many do a very good job — but there are some exceptions, and we feel this was an exception and Ms. Rao paid the price," Allen said.

A video posted by the Halifax Examiner to YouTube shows part of the altercation, including Rao swearing at a police officer to get off of her before one officer physically brings her to the ground and they struggle. Two officers appear to restrain Rao with staff members in the background.

"We have a young mother who has suffered a broken arm, a concussion which appears to have been caused when she was punched in the face … and suffering various injuries and can't care for her children and facing various criminal charges. So there's a lot of moving parts to this," Allen said.

Rao said her infant son and young daughter have mostly been staying with her parents while her wrist heals, since she isn't able to pick up her baby or do other household tasks like cooking and cleaning.

She added that her emotions have been up and down, where one day she feels "OK" and the next is really hard, since she wishes her children didn't have to witness the whole situation.

"That's the hardest thing, it really, really dwells on me the hardest and the biggest," Rao said.

Chief Dan Kinsella has called the situation "disappointing" and referred the case to the Serious Incident Response Team (SIRT). The watchdog announced recently that Rao's arrest meets SIRT's mandate "based on medical records," and are looking to speak with any witnesses.

The courtroom was packed with Rao supporters, and outside the courthouse more than 60 people calling on the Crown to drop the charges held signs saying "stop racial profiling" and "solidarity with Santina."

As Rao left the building, cheers erupted into the air. She smiled and waved back, stopping to hug various people.

In court Wednesday, Crown attorney Paul Carver asked for Rao's matter to be set over a few months until May 12, when SIRT will hopefully have finished their own investigation and reached some conclusions.

Allen said the SIRT report will not be the "be all, end all" but might provide more background to what happened.

When asked whether Rao will sue the Halifax police force, Allen said "everything is on the table," and while he believes there were violations of the Police Act nothing has been filed yet.

She added that ultimately she'd like to see the arresting officers "held accountable," as well as those involved from Walmart since they were the ones who called police in the first place.

A manager at the Mumford Road Walmart declined an interview in January and said he couldn't comment since it was a police investigation. He referred questions to the company's headquarters in Ontario. A statement from Felicia Feder, manager of Walmart Canada's corporate affairs, said all inquiries would have to be directed to police.

Rao said no one from Walmart has reached out to her personally.

Former Nova Scotia lieutenant-governor Mayann Francis has also weighed in, saying Rao's arrest left her shaken and even fearful of police for the first time.