Nova Scotia lawyer Lyle Howe performed double duty in Supreme Court on Thursday, representing MLA Trevor Zinck on fraud charges and appearing as a defendant in his own case. 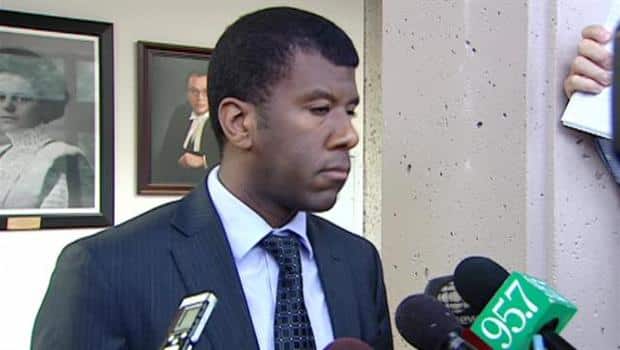 Lawyer defends client, then himself

8 years agoVideo
0:24
Howe acknowledged it was unusual to be both a lawyer and a defendant in the same courtroom. 0:24

Nova Scotia lawyer Lyle Howe performed double duty in Supreme Court on Thursday, representing MLA Trevor Zinck on fraud charges and appearing as a defendant in his own case.

First there was the court appearance of Trevor Zinck, the Independent MLA for Dartmouth North, who is charged with fraud and theft in connection the province's legislative spending scandal.

Moments later, the 27-year-old Howe represented himself to set a date for a pretrial conference on allegations that he drugged and sexually assaulted a woman.

"It's a first time for me and the first time I've seen it," Howe said on his way into court.

Howe is charged with sexual assault and administering a noxious substance after an alleged incident that involved him, another man and a 19-year-old woman in March 2011.

A pretrial conference for that case has been set for Oct. 5. That's not open to the public.

Howe will also return to court Oct. 18 to set dates for his trial.

Meanwhile, Zinck has said he is anxious to clear his name on charges of theft over $5,000, fraud over $5,000 and breach of trust. He was one of four MLAs charged in February 2011, following an eight-month investigation by RCMP.

Auditor General Jacques Lapointe's audit into MLA spending between July 2006 and June 2009 found "excessive" and "unreasonable" claims by some of the province's 52 MLAs.

Zinck's trial is expected to last three weeks. After several unsuccessful attempts to find trial dates that work for both Howe and the Crown, the judge adjourned that matter until next week.

What happened to the other MLAs in the expense scandal?