HRM fire code violations number in the thousands, but could be much larger

Halifax Regional Fire has issued close to 6,000 fire code violations to residential and commercial buildings since January 2018. The most serious violations include not having a fire safety plan, exit strategy or working fire alarms and sprinklers.

Every time Natasha Prest walks through a building, she holds her breath as she scans the ceilings, walls and cubbyholes, all while wondering if she'll be able to sleep that night.

Prest recently left her position as a firefighter to teach members of the public about fire prevention for Halifax Regional Fire and Emergency. She also spends her days combing through apartment buildings and businesses in the Halifax region, doing investigations and looking for fire code violations.

Prest said her experience responding to hundreds of fires over the last decade is why she comes across as the "heavy" when grilling building owners about missing pages in their fire safety plan or expired extinguishers hanging on the wall.

"When I come to do inspections, I'm looking at it from the fire code and regulations and things that we need to follow, but as well as keeping my fire family safe, as well as the occupants," said Prest.

She has good reason to worry.

A CBC News Investigation found that 5,912 fire code violations have been issued across 846 buildings in the Halifax Regional Municipality since Jan. 1, 2018. Some buildings had dozens of violations, while most had a handful.

The most common offence is not having up to date records, testing, and maintenance of fire safety devices with a total of 1,755 violations.

"If the fire alarm system doesn't work, for example, it can result in tragedy."

Covey said it's "very rare" to inspect a building and not find a single violation. 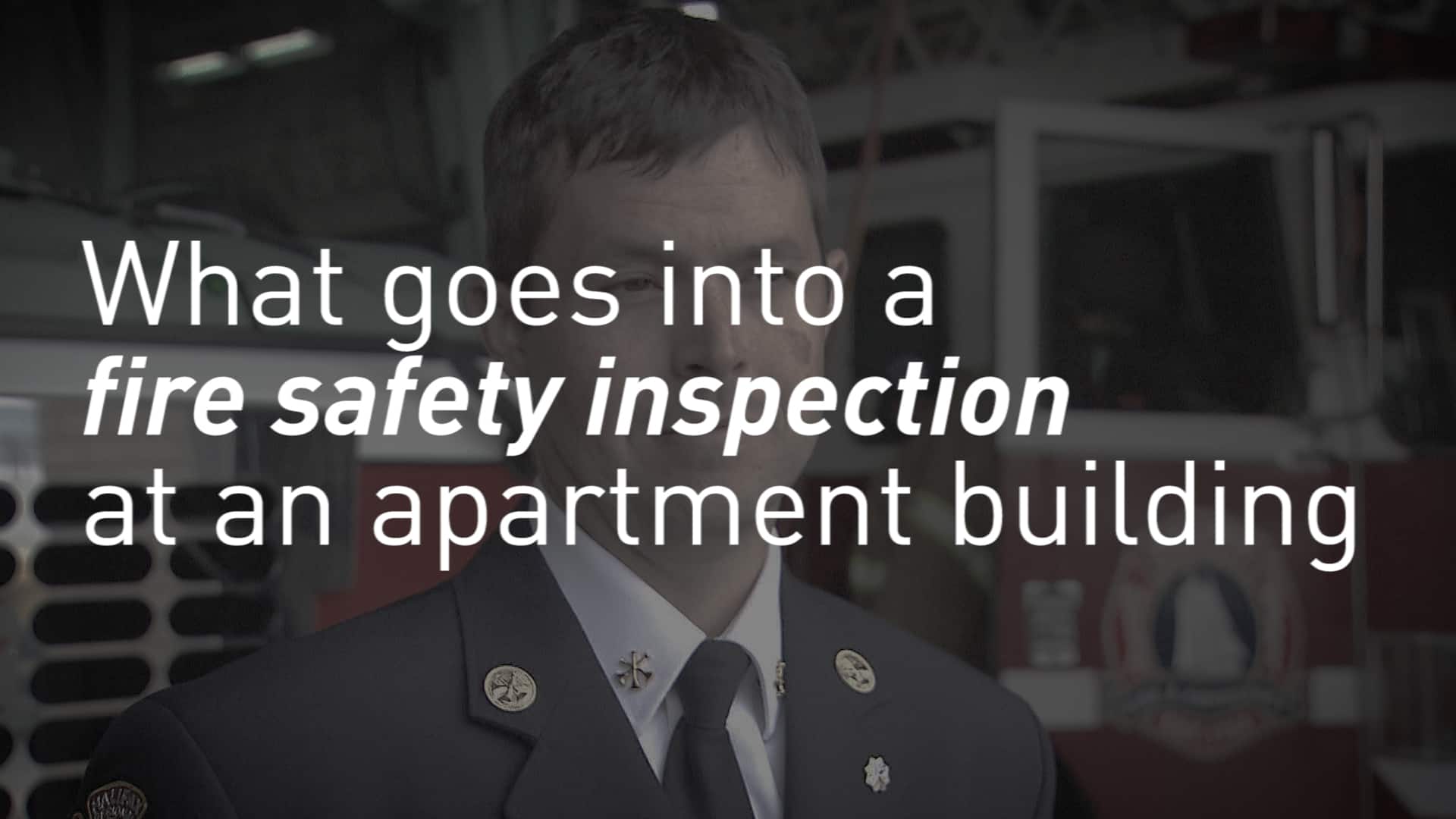 What goes into a fire safety inspection at an apartment building

1 year agoVideo
1:21
CBC News tagged along for an extensive inspection of a building in the Halifax area. The inspector's checklist isn't short. 1:21

"That would be one in a thousand," he said.

"There's always something missed and I wouldn't blame the owner for that. It's a lot for them to manage and it's easy for one thing to fall off."

Through an access-to-information request, CBC News learned that Armoury Square — a luxury condo building near the Halifax Common — had 46 violations earlier this year.

During the inspection, it was found that Armoury Square did not have a suitable escape plan. When fire officials were shown how residents would exit the building during a fire, they were led through a backyard that stopped at a padlocked fence. The inspector wrote in the report that "all exits are required to be accessible with no keys required for exiting."

Violations were also given for not having an updated fire safety plan, extension cords were found to be powering table lamps and some entrance and fireproof doors were not properly closing.

"I wouldn't say it's the amount — it's the severity. But once you're exceeding 40 violations on a visit, that's probably a red flag for us that there's something wrong," Covey said.

David DiPersio, president of the condo board, said all of the violations at Armoury Square have since been addressed.

"The report of the code violations was brought to the attention of the board [including me] and, working with our property manager, we made it an immediate priority to remediate all issues. A compliance letter was obtained once everything was taken care of," he said in an emailed statement.

Covey said having working fire connections such as sprinklers and alarms are crucial. His team also wants to hear that building owners have an exit plan.

"Staff have to know what they're supposed to do when the fire alarm goes off, and so we expect them to have those plans," said Covey. "If they don't have those plans, that's a big concern for us."

Prest said another major issue is making sure all doors in a building can close and latch. She said she's fought and investigated several fires where a closed door meant an extra few minutes to get to safety.

"A closed door will reduce the smoke and heated gas that will enter the room," she said.

"Sleeping with your doors closed at night, I would 100 per cent recommend that."

A door being left open was blamed for the rapid spread of an apartment fire in the Bronx, New York, that killed 13 people in December 2017. Months later, New York city council mandated that all city apartment doors self-close.

There is no legislation in Nova Scotia that requires a time limit for building inspections, unless it's an assembly hall. For all other buildings, it's up to each municipality "to determine the frequency, based on the local risks for their area," said Krista Higdon, spokesperson for the Department of Municipal Affairs.

Covey said inspections are his "No. 1 priority," but there are major challenges getting to each of the 20,000 or so buildings under his direction. On average, his team is getting to each residential building once every three years.

"We've got a big geographical area to cover all the way from Hubbards to Sheet Harbour, and that takes a lot of time and it's a lot of driving time, so it makes our inspectors less efficient and it makes it a lot harder for us to get to those areas," Covey said.

In an ideal world, Covey said he would like to have 30 fire inspectors on staff. Currently, there are 14.

He tries to target inspections at "high-risk" buildings — ones that have a history of violations — as well as ones that are a farther distance from fire hydrants. He also prioritizes apartment and condo buildings, since that's where people sleep.

But he said what's keeping him up at night is the fact he has no authority to inspect buildings with three units or less. He hopes to convince council to change that in the next year.

"We have a lot of fires in those buildings and tragic fires, so we have to try and get there through public education," he said.

Covey said most often the cause is traced back to disabled smoke alarms.

"If it doesn't work, a lot of people might think that , 'Well, I'll just wake up.' You will not wake up. The fire will consume the oxygen in the building. You will go into a deeper sleep and by the time the smoke has gotten that far, it makes it very difficult to do an escape," he said.

Kathy Kerr-Miller, property manager at Killam Apartment REIT, said the cost of staying up to code can be expensive. However, she said it's nothing compared to an actual fire.

"There's been situations where we've had fires in apartments and those can absolutely be costly," she said.

"The upkeep of the equipment and the annual inspection, you know, you have your dryer vent cleaning, you have your exhausts in your parkades, the fire panels, the sprinklers," she said.

"All of those — there's a cost associated with it. But for us, that's not something that is even factored into the equation. It's just something you know you have to do yearly and it is done."

Kerr-Miller said she welcomes visits from fire inspectors and learns something new every time.

"As the property manager and the building staff, we're coming and going out of this building all the time and we may not see things that they automatically see, so it's nice to have that fresh set of eyes of somebody coming through," she said.