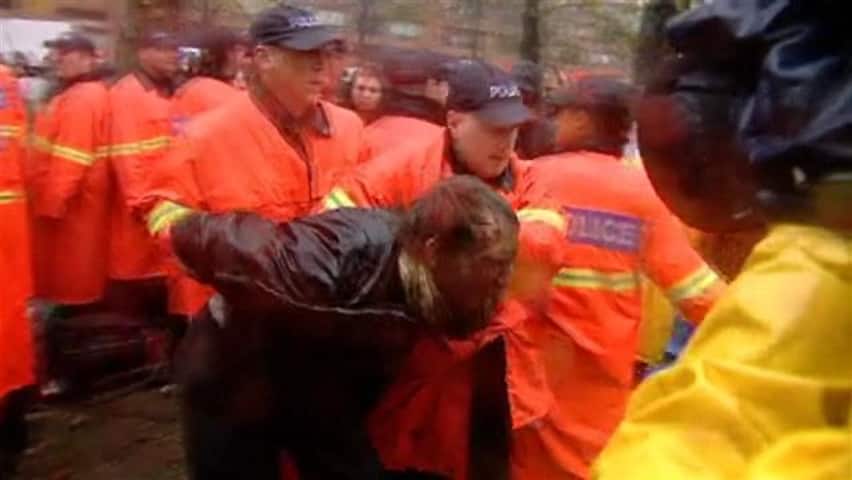 Coun. Debbie Hum made a motion to add the issue to council's regular agenda. Earlier Tuesday at an in-camera meeting the motion was ruled out of order.

A municipal lawyer cautioned councillors that the Remembrance Day eviction is before the courts, so it would not be wise to discuss it in public.

Council voted 15 to 8 against Hum's motion to add the issue to council's agenda.

Coun. Jennifer Watt then tried to apologize personally for the eviction but Mayor Peter Kelly cut her off, citing legal advice.

"The solicitor has indicated that it's not appropriate at this time," Kelly said.

Earlier Tuesday, Hum had vowed to walk away from any closed-door discussion about the Remembrance Day eviction of protesters from Victoria Park.

Occupy demonstrators were ordered out of the park on Friday at about noon. Police began to dismantle their tents two hours later. Fourteen people were arrested by 4 p.m. — all accused of obstructing justice.

The decision to enforce the municipal parks bylaw was made by regional council in a private session last Tuesday. Halifax police Chief Frank Beazley decided when to execute the order.

Hum said she had no idea police would act so quickly on Remembrance Day.

Hum needed the support of two-thirds of council for her motion to pass. Some councillors said they've been getting an earful from constituents about the way HRM handled the eviction, while others said they haven't heard much.

HRM's agenda review committee decided Monday that the matter should be debated in private because of possible legal issues. The committee is made up of the mayor, chief administrative officer, deputy CAO, clerk and HRM's lawyer.