The Canadian Border Services Agency is showing off for the first time how border guards managed to stop a drug deal worth hundreds of millions of dollars.

International sting blocked $860 million worth of drugs destined for Montreal 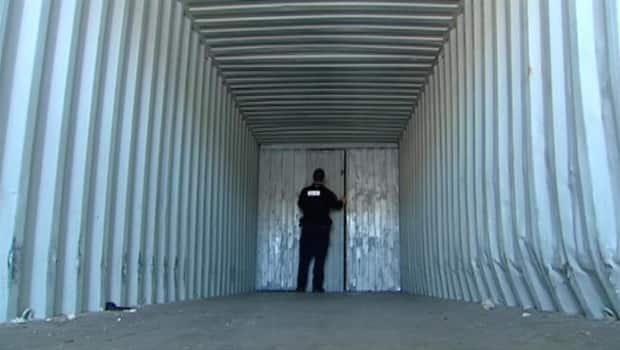 9 years agoVideo
1:43
The Canadian Border Services Agency reveals how it discovered millions of dollars of hashish hidden in a shipping container. 1:43

The Canadian Border Services Agency is showing off for the first time how border guards managed to stop a drug deal worth hundreds of millions of dollars.

Border guards singled out a container at the terminal and sent it for x-rays.

"The importer was usually bringing metal-related items, whether it was metal wiring or metal rod, and in this case, it was declaring bales of cottons," said Dominique Mallette of the Canada Border Services Agency.

The scan showed something dense at the back of the container.  When inspectors measured the space, they found the 40 foot container was just 35 feet long.

"The answer was the false wall," Mallette said.

Behind that false wall, inspectors found 5,700 kilograms of hashish. Mallette said that would have a value of $114.5 million dollars. The drugs, which had originated in Karachi, Pakistan, were destined for Montreal.

That discovery then sparked a massive investigation by the National Port Enforcement Team that spanned several years.

On April 19, the RCMP announced nine people were charged in Montreal for trafficking another 43 tonnes of hashish.

"We're very happy as an agency to be the leader or the initiating agency, if you will, as the result of this particular seizure," Mallette said.

The nine people arrested face charges of conspiracy, importing and possession of cannabis resin for the purpose of trafficking.