A new exhibit at Halifax's historic Citadel Hill is teaching people about the war in Afghanistan through the eyes of a young artist who served as a soldier in the war. 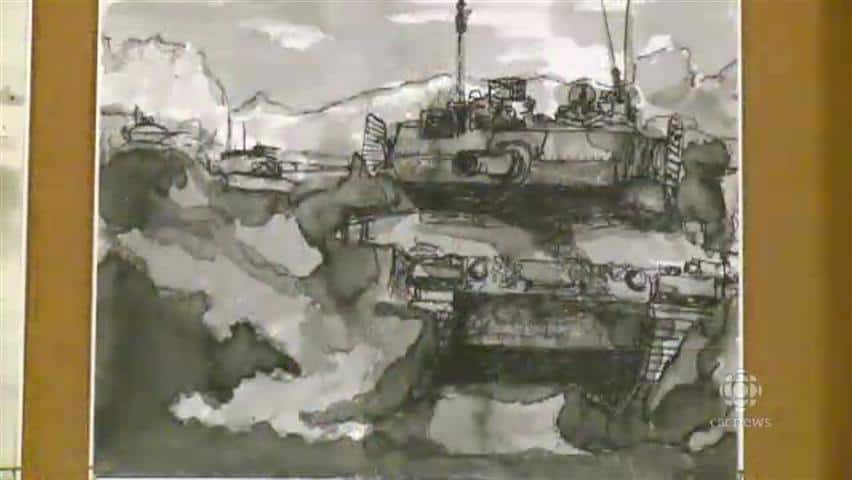 7 years agoVideo
2:11
Halifax's historic citadel is displaying drawings from Afghanistan, through the eyes of a combat soldier. 2:11

A new exhibit at Halifax's historic Citadel Hill is teaching people about the war in Afghanistan through the eyes of a young artist who served as a soldier in the war.

Among the uniforms and photos, Bombardier Jessica Wiebe's drawings are now at the centre of Citadel Hill's museum. Her work, sometimes blurry or hazy, is a view through the eyes of a Canadian combat soldier.

"I think for the most part, it started out as a more cathartic way of working for myself to relive some things that most people try to block out," she said.

Weibe joined the reserve after she graduated from high school in Brandon, Man. In 2008, at just 20 years old, she found herself en route to Afghanistan.

Weibe served overseas for six months. In that time she was outside the protection of the base, serving as security for construction workers.

"I consider it an incredible experience, sometimes hard to process. I think that's how I move towards my art," she said.

The images show the day to day patterns on the job including travelling in tanks, the dusty roads and the ramp ceremony for fallen soldiers — something she witnessed several times.

"That was actually probably one of my least favourite images. I felt, I wasn't sure if I had the right to draw it," said Weibe.

One of her subjects, a fellow soldier, came to see the exhibit.

"He said it was amazing to stand in a museum with so much history and see a drawing of himself and be part of that history," said Weibe.

It wasn't long after Weibe returned to Canada that she decided to start drawing. She moved to Halifax to study at the Nova Scotia College of Art and Design. During her studies, images of Afghanistan poured out.

Weibe is now applying for the job of war artist, to revisit these communities and help chronicle memories of soldiers for future generations.

With files from Carolyn Ray