TSB investigators in Halifax after 747 cargo jet goes off runway

The cargo plane was arriving at Halifax Stanfield International Airport from Chicago when it went off the end of the runway, stopping just 50 metres from a fence separating the airfield from a public road. 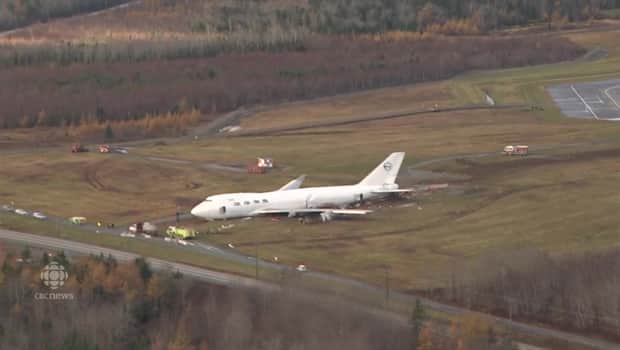 2 years ago
0:29
The Sky Lease Cargo plane came to a stop less than 50 metres from a fence separating the airfield from Old Guysborough Road. 0:29

Investigators with the Transportation Safety Board have arrived in Halifax after a 747 cargo aircraft went off the end of a runway early Wednesday morning at Halifax Stanfield International Airport and stopped not far from a public road.

The crew of four on board were removed by fire crews and taken to hospital to be treated for minor injuries.

A spokesperson for the TSB said investigators will be photographing the scene and collecting flight data recorder information. They will also be speaking to air traffic controllers, looking at weather conditions and examining the maintenance history of the aircraft.

Airport spokesperson Theresa Rath Spicer said the Sky Lease Cargo plane coming from Chicago was making a scheduled landing to pick up live lobster and then fly to China, with a stop in Alaska along the way. Rath Spicer said the lobster was instead picked up by Gateway Aviation to be transported to its destination.

The plane came to a stop less than 50 metres from a fence separating the airfield from Old Guysborough Road, a public two-lane road. The stretch between Oldham Road and Grove Road was closed to the public at around 9 a.m. but reopened by 4 p.m.

Rath Spicer said the accident happened at the end of Runway 14/32 shortly after 5 a.m. While it's the shorter of the two runways at the airport, cargo flights arrive and depart from there on a regular basis, she said.

It's still unknown if weather was a factor but there was light rain at the time of the incident. CBC meteorologist Ryan Snoddon said there were also fog patches at about 5:15 a.m. and some water on the runway, with 23 mm of rain falling between 8 p.m. and 2 a.m., then 5 mm between 2 a.m. and 8 a.m.

The airfield was temporarily closed while a perimeter around the site was established, and then the main runway was allowed to reopen on a limited basis. Four flights were diverted and the airport's website was reporting delays and cancellations for both arriving and departing flights Wednesday morning.

"We've had a number of flights either arrive or depart, however the flight schedules continue to be significantly impacted," Rath Spicer said in an interview.

"We're asking passengers to check with their airline as to their flight's status … At this point our operation is significantly impacted."

The airport tweeted on Wednesday afternoon that there are still a number of flight delays as a result of the cargo airplane incident.

Rath Spicer said Runway 14/32 will remain closed "for some time" as the investigation into what happened is conducted.

The deputy chief for Halifax Fire said the jet was not on fire and crews attended the scene in a support role along with airport fire crews.

A resident of Oldham Road in the nearby community of Goffs was shaken by early morning crash.

"It sounded like a great big gush of wind," said Christena Dunham. "I heard things flying around. It's scary. This isn't the first time it's happened."

On Oct. 14, 2004, seven crew members died when a cargo-laden MK Airlines jet, also a Boeing 747, crashed on takeoff early in the morning.

The plane — loaded with lobster, lawn tractors and computer gear — failed to gain enough speed as it traveled down the runway. The tail of the aircraft hit a mound of earth, sending the plane crashing through the woods. It exploded in a quarry across the Old Guysborough Road.

"I wish the airport would buy up the houses on this road, at this end of the road anyway, because I don't really feel safe being so close to the airport,"  Dunham said.

"It's not that I moved in across from the airport fence. I was here long before the airport was here," she said, adding she's lived on the road since she was born in 1939. Construction on the airport began in 1955.

With files from Elizabeth Chiu