Mother of Grade 9 student says it's shameful that other teens stood by and watched without intervening as her son lay in stream — 'There is no compassion in that.'

A video showing a teen with cerebral palsy being bullied into lying in a stream so his classmates can walk over him is being widely condemned online.

Brett Corbett is a Grade 9 student at Glace Bay High School. On Wednesday he was with other students at the stream, known as the Burr-Bank, near the school.

"At first it started as a dare," Corbett said. "But then someone threatened to push me in the Burr-Bank and said 'Get on your gut,' and a girl walked on my back."

The 14-year-old said it made him feel "sad and upset."

A video of the incident shows other students watching on the sidelines while some students swear at Corbett and he then gets in the water. The video has been widely viewed on social media and has elicited strong criticism.

This short excerpt of the video that has been circulated shows a girl walking over Corbett. 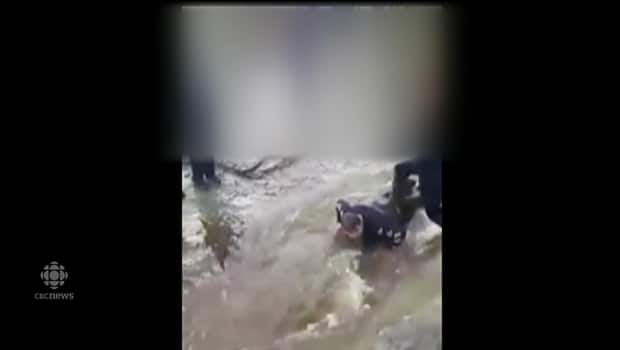 2 years agoVideo
0:14
A video showing a teen with cerebral palsy being taunted into laying in a stream so his classmates can walk over him is being widely condemned online. 0:14

Corbett's mother, Terri McEachern, said she was informed about the incident by a school official on Wednesday.

"It was said to me by the school, he took a dare," she said.

But then McEachern saw the video and that told a different story.

"It wasn't a dare. He was told if he didn't get in, he would be thrown in, pushed in, and there was a lot of mocking and comments were made, so he felt he had no choice."

She said it was shameful.

"That kids could just stand there and video and not want to help. There is no compassion in that."

Other people have come forward to show Corbett and his family support.

McEachern says some students came by their house on Thursday and several young people were with Corbett's family as they talked to the media on Friday.

Brianna McDonald, who said she is new to the school, called the incident "very upsetting."

The Grade 12 student said if she had been there at the time, she would not have stood by and watched.

"We just want Brett to know that he is not alone and he has a whole army of people behind him."

Another Grade 12 student, Julia White, said she found out about what happened to Corbett the next day and called it disrespectful.

"It was kind of hard to believe that something like that would happen," she said.

White said she and others in her graduating class got together to raise some money to buy Corbett a present to show they care.

"We heard he was saving up for a game, so we are going to surprise him with the game and hopefully let him know that we are here for him and he's not alone."

In a statement, the Cape Breton-Victoria Regional Centre for Education called the incident "unacceptable and very disappointing behaviour." Glace Bay High's school liaison police officer is working with school staff in their investigation of the incident.

"This type of behaviour will not be tolerated and is not one that the school and the centre for education is proud of," said spokesperson Michelle MacLeod.

"We will be working with school administration to facilitate ongoing education regarding the importance of respectful and responsible relationships and behaviour and the possible school and legal consequences of unacceptable behaviour."

Yvonne LeBlanc-Smith has been reporting news in Cape Breton since 1981. You can follow her on Twitter @leblancsmith and reach her at yvonne.leblanc-smith@cbc.ca