A gas station and convenience store operator in the Annapolis Valley says he's frustrated by the lack of police action after he was the victim of a gas-and-dash incident. 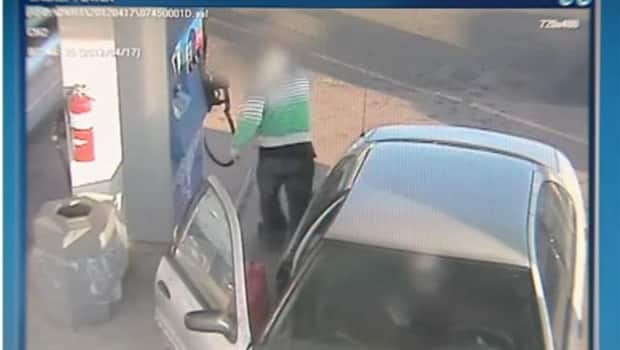 Gas and dash in Aldershot

A gas station and convenience store operator in the Annapolis Valley says he's frustrated by the lack of police action after he was the victim of a gas-and-dash incident.

Steve Morine, who owns TJ's Convenience in Aldershot, said a car pulled up to his gas station last month and a young man got out and started to fill up a can with gas.

When he was done, he filled up the car and left without paying.

"It was approximately $100 worth of fuel," Morine told CBC News on Wednesday.

Footage of the car and the man were caught on a surveillance video, but the car didn't have a licence plate.

Morine put a picture of the man on a poster and taped it to the front door of his store, hoping community members would recognize him — and they did.

The store owner said he went to the police with the evidence, thinking it was an open-and-shut case. Morine said he was stunned when police told him the young man wouldn't be charged.

"He felt that if he did go in front of a judge, that he wouldn't get any more than a slap on his wrist anyway," said Morine.

"Basically, I interpreted it that I was wasting his time."

Const. Patricia Grobmeier, a spokeswoman for the RCMP, said one of the factors in the case was that the young person's father eventually showed up at Morine's store and paid for the gas.

"In this case, full restitution has been made," she told CBC News.

"Given all the circumstances of the case, criminal charges are not being looked at at this time."

Morine said the way the police handled his case sends the wrong message.

"For any other individual who wants free fuel, basically I interpret it that they come to the place of business, get the gas and if they get away with it, they've got free gas," he said.

"At the worst scenario, they will have to pay for the gas if they get caught."

Morine said he's keeping a photo of the young man at the entrance of his store as a deterrent to anyone thinking of stealing from him.