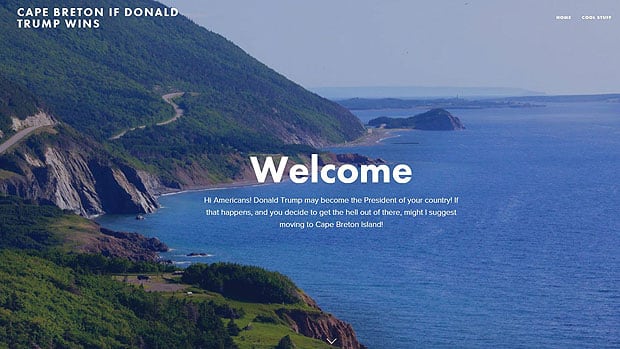 5 years ago
3:20
A website inviting Trump opponents to move to Cape Breton sees an increase in traffic after Donald Trump's Super Tuesday success 3:20

Cape Breton has received a lot of attention lately from U.S. media, and now Fox News has joined the fray.

The island was the topic of discussion on Monday's Fox and Friends, the cable channel's morning show. The show's hosts discussed the Cape Breton If Donald Trump Wins campaign, a tongue-in-cheek website launched by Cape Breton radio DJ Rob Calabrese.

The hosts seemed quite pleased at the prospect of celebrities who oppose Trump leaving the U.S. Even if they were a little confused about what Cape Breton is.

"There is a Nova Scotia town — actually it's an island, Cape Breton," said host Steve Doocy. "It is lovely. They have offered to take the celebrities."

Doocy's co-host, Ainsley Earhardt, seemed to think no one is living on Cape Breton.

"Can we see a picture of that island again? I don't see anything there. It looks very beautiful, I saw one road, lots of trees. It looks like the Sound of Music. They're going to frolic there. They have their own little island."

In reality, Calabrese started the campaign as a fun appeal to Americans threatening to move to Canada if Trump wins the presidency. But he was overwhelmed by the international attention, and swamped with real questions from Americans thinking about visiting — or even moving to — Nova Scotia.

The Fox News show even put together a chart of celebrities they think might move to the "Land of the flee," as they dubbed Cape Breton. (Note that Jon Stewart actually said he would consider getting a rocket to another planet if Trump wins "because clearly this planet's gone bonkers.")

Earhardt also asked Trump's sons, Eric and Donald Jr., in an interview about the American celebrities talking about leaving if their father is elected.

"I'll buy them their airfare," Donald Trump Jr. told Fox. "Those are endorsements for Trump."

On Tuesday morning, Donald Trump himself told Fox and Friends he would chip in too.

"I would join with my boys in paying for it," Trump said.

Watch the full segment from Fox and Friends below: