A military veteran, his newly graduated nurse wife, their 10-year-old daughter and her grandmother are dead after an apparent murder-suicide that has rocked a rural Nova Scotia community.

Lionel Desmond appears to have shot himself, 3 others died of gunshot wounds, RCMP say 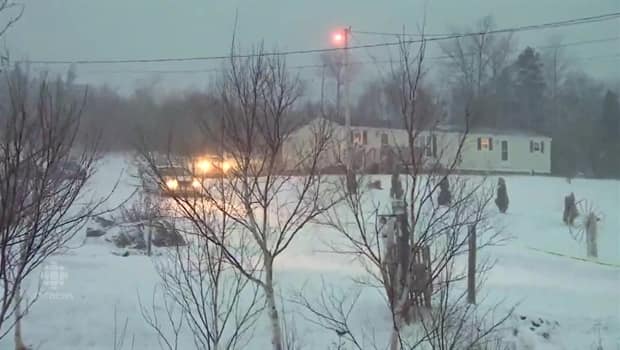 RCMP on scene at home in Upper Big Tracadie, N.S. after 4 bodies were found on Tuesday evening

4 years ago
0:52
Police were called to a home in Upper Big Tracadie, about 29 kilometres northwest of Guysborough, shortly after 6 p.m. AT Tuesday. 0:52

A military veteran, his newly graduated nurse wife, their 10-year-old daughter and her grandmother are dead after an apparent murder-suicide that has rocked a rural Nova Scotia community.

CBC News has confirmed the deceased are Lionel Desmond, 33, his wife, Shanna Desmond, 31, their 10-year-old daughter, Aaliyah, and Brenda Desmond, 52, who was Lionel's mother.

Nova Scotia RCMP said Lionel Desmond appeared to have shot himself, and the three others died of apparent gunshot wounds. Police said they found two guns in the house and are continuing to search the area.

Police were called to the house in northeastern Nova Scotia, about 29 kilometres north of Guysborough, shortly after 6 p.m. AT. Insp. Lynn Young, officer in charge of the Nova Scotia RCMP major crimes unit, told reporters two people found the bodies and called 911.

"This is incredibly tragic for everyone involved," she said.

Shanna Desmond's aunt, Catherine Hartling, said she went to the home in Upper Big Tracadie on Tuesday night because she thought Lionel Desmond had taken his own life. She arrived to learn everyone inside was dead.

Lionel Desmond served with the Canadian Armed Forces in Afghanistan and suffered from post-traumatic stress disorder (PTSD), Hartling said. He retired as a corporal.

He had been posted at CFB Gagetown in Oromocto, N.B., and was seeking help and treatment for his condition since he left the military, she said.

"He was even fighting to get into the hospital himself when he first got out in 2015," she said.

A Department of National Defence spokesperson said in a statement that Desmond was an infantryman with 2nd Battalion, The Royal Canadian Regiment. He enrolled in 2004 and deployed to Afghanistan from January to August of 2007.

He was posted to the joint personal support unit in June 2014 until his release in July 2015. That unit supports ill and injured members by providing access to available benefits, programs, and family services.

Rev. Elaine Walcott, who lives just outside of Halifax and is related to the victims, said Lionel Desmond had recently spent time in a Montreal clinic for post-traumatic stress disorder.

"He's been crying out for help from the mental health system," she said.

Shanna Desmond recently graduated as a registered nurse and was working at St. Martha's Regional Hospital in Antigonish, N.S. — the same hospital where her husband had tried to get treatment within the last week, Walcott said.

"I understand that there were no beds available," Walcott said.

"He suffered in physical ways, he suffered in emotional ways, and spiritual ways," she said of his time in Afghanistan.

'I couldn't believe it'

Sheila Pelly, deputy warden for the Municipality of the District of Guysborough, said she was shocked when she heard the news Tuesday night.

She knew all of the victims and generations of their families.

There will be lots of help for people through counselling services, churches and other supports, said Pelly.

'Things that you just can't get away from'

Trevor Bungay, who lives in New Brunswick, served with Lionel Desmond, and they kept in touch.

He said Desmond was "one of our go-to guys" who "always had a smile on his face."

The pair were part of a 10-person section during a tour in Afghanistan in 2007.

"We did see and do a lot of things over there that no human should ever really have to do," Bungay told CBC.

They were part of the infantry and "fought, guns blazing, for three months straight," he said.

He said learning of his friend's death was a shock.

"It's tearing us apart right now," he said. "For this to happen in this way, in any way, it's devastating. It makes me angry. There's sadness. There's everything. There's a ton of emotion."

A spokeswoman for the Strait Regional School Board said members of the school and regional incident response teams would be at Aaliyah's school on Wednesday offering support and counselling services. Supports would remain in place for as long as needed, Deanna Gillis said in an email.

'Situation out of the ordinary'

Dr. John Whelan, a Halifax-area clinical psychologist who focuses on treating military personnel, veterans and first responders with PTSD, called the situation "out of the ordinary" for someone with PTSD, though he was unfamiliar with the circumstances of the case and had never treated Desmond.

Whelan said that while there are stereotypes about how people with PTSD behave, the reality tends to be different.

"If we look at purely the components of PTSD, it is very much classified as withdrawal, avoidance, shut down, trying to control oneself," he said. "That's in the opposite direction of the stereotype."

His advice for people who might be feeling upset about the events is to stay connected with people and reach out if they need help.

"Talk to somebody, talk to anybody, a close buddy or friend or group."

With files from the CBC's Steve Berry, Catherine Harrop, Elizabeth Chiu and The Canadian Press