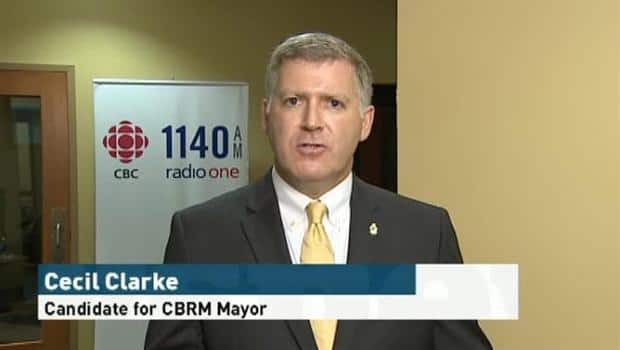 Clarke announced his decision Thursday morning at Centre 200 in Sydney.

The 44-year-old politician was a Progressive Conservative MLA and served as Attorney General, Justice Minister, Energy Minister and Speaker of the Legislature before he resigned his Cape Breton North seat to run federally.

Clarke told supporters his nine years of experience in the Nova Scotia legislature will serve him well.

"Having had the honour of serving as Speaker of the Legislature, even though you come in with a certain partisan perspective in terms of how you get there, once you go to that chair you have to work with all members across party lines," he said Thursday.

Clarke failed to win a seat in the last federal election for the Conservative party when he ran against Liberal incumbent Mark Eyking in Sydney-Victoria.

There are now three mayoral candidates in CBRM; the other two are Rankin MacSween and Owen Fitzgerald.

They're running to replace long-time mayor John Morgan, who announced last month he will not reoffer in the upcoming municipal election.

As an MLA, Clarke was frequently on the opposite side of issues from Morgan, especially when it came to the matter of equalization funding.

Clarke thanked Morgan on Thursday for his years of service.

"While I may have differed from time to time on points of policy, I've never disagreed with the mayor's devotion to his work," he said.

"His electoral record is enviable to all, including myself. So congratulations and best wishes to the mayor."

The municipal election is on Oct. 20.