A New Brunswick man says General Motors is being tight-lipped about an investigation into a fire that destroyed his 2015 GM Chevrolet Colorado earlier this summer.

Ransford Lockhart was driving on Highway 8 last June near Boiestown, N.B., when the person behind the wheel of a logging truck pulled up in the passing lane beside him, beeping his horn and waving his arms.

As he pulled over, Lockhart rolled down his window and could hear the driver shouting at him, "Get out of the truck. Your truck is on fire."

Smoke began billowing into the cabin of Lockhart's pickup, a 2015 Chevrolet Colorado Z71, and he frantically opened the door as flames crept toward the handle. The vehicle exploded within minutes of him jumping out, an escape he now describes as "a near-death experience."

"It made me realize how fortunate I was that it was just me in the truck," said Lockhart, who captured what happened in a dramatic cellphone video. "What if my son was in there? He's one year old and he's in a car seat. What if my wife was in there?"

To this day, he has no idea why his pickup truck went up in a giant ball of flames.

Transport Canada is examining the burnt-out frame of the vehicle. But Lockhart is frustrated that General Motors, which manufactures the Colorado, has been tight-lipped about its own review after he sought assurances it would conduct an investigation. 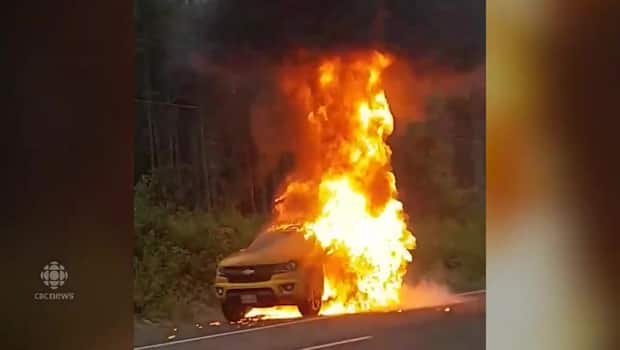 Dramatic video of a Chevrolet Colorado engulfed in flames along a N.B. highway

1 year agoVideo
0:40
Within minutes of getting out of his truck, Ransford Lockhart watched as his truck burst into flames. 0:40

Lockhart, who was wearing shorts at the time of the fire, had minor burns on his legs. He and the truck driver who flagged him down, Jeremy Weaver, watched the Colorado in disbelief.

"There wasn't nothing left of the truck. You couldn't even tell if it was a truck or a car or what. It was crazy," Weaver said.

The fire was extinguished by members of the Upper Miramichi Fire Department. A firefighter later told Lockhart he'd seen the truck at a convenience store about 10 minutes before the explosion, and had thought it had under-vehicle lights. He only later realized it was on fire.

Lockhart had noticed a smell when stopped at the convenience store, but figured he'd left his gym bag in the back seat and that was the source of the odour. A short time later, while going up a hill, he said, his truck temporarily lost power.

After the fire, Lockhart and his wife, Amy, contacted GM to report the fire. They were asked to submit a summary of events, so they did.

About a month later, they said, a GM representative contacted them asking for the truck and to settle their claim. When the Lockharts replied their insurance company had already dealt with the claim, they said they were told the case was "closed."

They are not seeking compensation from the automaker, but said they wanted to make sure the fire is being investigated. They asked in an email about the status, but said they never received a response.

General Motors Canada spokesperson Uzma Mustafa told CBC in an email that the company is investigating the "issue."

"We are following our internal review process with regards to this customer's situation."

Mustafa said GM has no further comment "as we are currently investigating it."

She did not respond to two emails asking whether GM had reported the fire to Transport Canada.

General Motors did issue a recall in June 2018 for its 2018 Chevrolet Colorado and several other 2018 models related to a potential fire risk.

"On certain vehicles, a joint on the high-pressure fuel pump may have been improperly welded during the manufacturing process," the recall notice says.

"Over time, this could cause the weld to crack and create a potential fuel leak. A fuel leak in the presence of an ignition source could increase the risk of fire, causing injury and/or damage to property."

The Lockharts didn't realize they could report the fire to Transport Canada until they contacted CBC in early September. The department said in an email that it's examining the vehicle, and working with the Lockharts's insurance company and GM to determine the cause.

"The department documents and analyzes these reports, and where information suggests there may be a trend involving a potential vehicle safety issue, including fires, the department initiates a defect investigation process to determine if a safety defect exists," Transport Canada spokesperson Annie Joannette said in the email.

She said if the investigation concludes there's a safety defect, the department informs the manufacturer, which then must tell affected vehicles owners of the defect, risk and corrective action.

Joannette said manufacturers are not obligated to report incidents involving vehicles they manufacture to Transport Canada. However, they are required to inform the department and the vehicle owner "when they become aware of a defect that may affect the safe operation of a motor vehicle."

She said there have been no other fires reported to Transport Canada for 2015-2019 Chevrolet Colorado vehicles.

Amy Lockhart said that when her husband called from the scene, she had thought it was only a small fire in the engine. She was shocked when she watched the video.

"It looked like something from Hollywood, but it was real life and it could have had real consequences," she said.

"The outcome could have been much different, especially if our son has been in there and if the truck driver hadn't come along. We could very well be down some family members today."

"She called me and thanked me," Weaver said. "She said, 'Because of you, my little boy still has a dad.' I'm just so thankful I was there at the time to help him get out of that mess."