Fire contained and the take down of the structure has begun 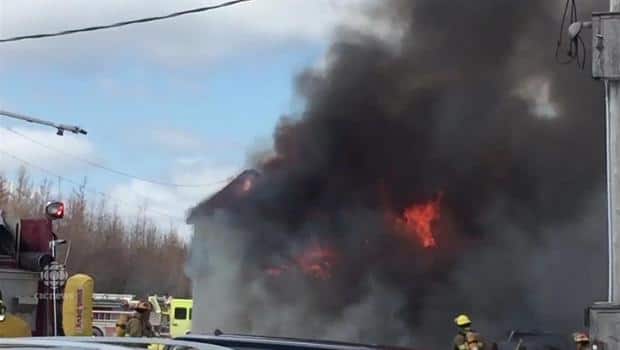 5 years ago
0:29
Bus garage burns to the ground next to Hants County school on Tuesday. 0:29

Classes at Hants North Rural High School and Kennetcook District School will be back on Wednesday after a fire at a bus garage adjacent to the school led to it being evacuated Tuesday afternoon.

The Chignecto Central Regional School Board says the take down of the structure has begun.

The school board says the area around the fire site will be off limits to students and staff. They say there will be no parking around the back side of the school. Students are being asked to take the bus or to carpool to school Wednesday.

Debbie Buott-Matheson, a spokeswoman for the Chignecto-Central Regional School Board, said from what she can tell, the fire broke out in a half-ton truck parked just outside the bus garage.

"We thought things were well in hand," she said.

Instead, the fire grew in size, and eventually destroyed the garage.

The blaze started during the noon hour, Buott-Matheson said. Thick clouds of smoke billowed over the area. An older school bus being worked on inside the garage was also destroyed in the fire.

Firefighters responded, the school was evacuated and then the elementary students were given the go-ahead to return to class.

A new evacuation order was given at around 2 p.m. and staff began busing between 250 and 300 students from the school to the local fire hall, Buott-Matheson said.

Buott-Matheson said the garage is 45 feet by 25 feet, and typically used to do repairs on school board vehicles.

With files from CBC's Blair Rhodes and Anjuli Patil