Fire forces dozens of tenants out of building

More than 50 people are out of their homes after a fire destroyed a large part of an apartment complex in Lower Sackville. 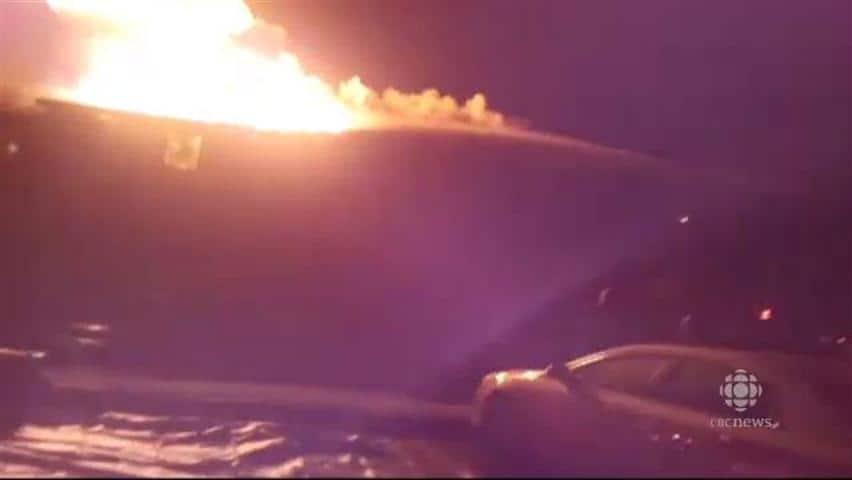 7 years ago
0:16
Ward Crawley captured this footage of the apartment fire on his phone. 0:16

More than 50 people are out of their homes after a fire destroyed a large part of an apartment complex in Lower Sackville.

Halifax Regional firefighters were called to Lexington Court apartments at about 12:30 a.m. Saturday.

"Pieces of the building were falling off and the flames were falling on the ground. They were telling people to back off because it was dangerous," said Ward Crawley, a tenant for two years.

"They were licking the sky. There's no other way to say it. They were just enormous," said Desebrais, who's in Lower Sackville visiting her father.

"The whole roof, it caved in. The window blew up there. Part of the roof right there was falling in pieces, just burning chunks. It was unreal."

Gary McCurdy, fire division commander, said it appears the fire started on Touchstone Court on the top level of the three-storey building.

He said the blaze spread to the attic and drove firefighters back. One-quarter of the building is destroyed or uninhabitable.

A few other neighbouring apartments were damaged by smoke or water.

One person was treated at the scene, but there are no reports of serious injuries.

The Red Cross said it's supplying seven tenants with emergency provisions such as clothing or food. It expects requests for help from several others.

The building's owners and managers put some of the displaced tenants up at a hotel for the night. Other tenants stayed with family or friends.

Claire Ford was allowed back inside Saturday just to pick up medication and cat food.

"The ceiling was down in the walk-in closet, my door was locked so they had to bust my lock, floors were pretty wet. I didn't get a good look at the furniture because the power was off," Ford said.

Ford expects to spend the night with relatives. Her mother, who lived in the section most damaged by the fire, is also displaced.

Desebrais said she's impressed with how people helped each other out.

"There wasn't a second thought in anybody's mind, just making sure everybody was out, making sure the kids were out, the seniors were taken care of. You know, a lot of people were scared, nobody knew what was going on, but we just kind of gave each other support," she said.