More than 40 people in Amherst, N.S. were forced out of their apartments after a fire Sunday night, says the Canadian Red Cross. 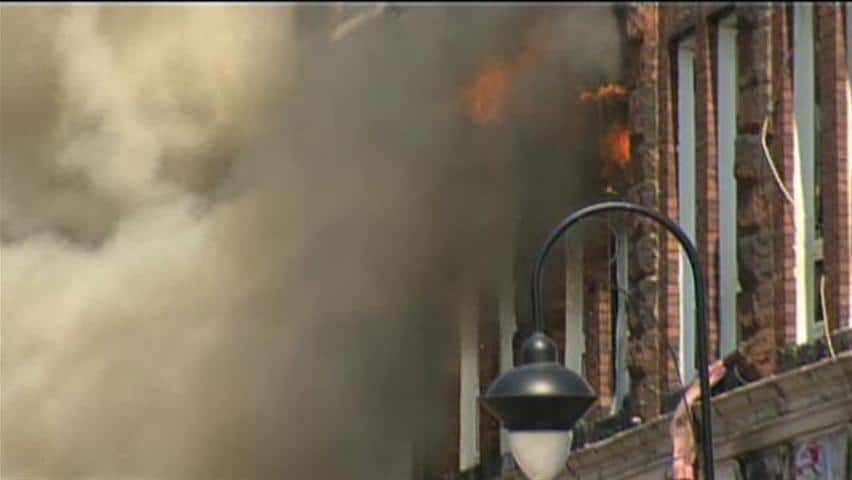 8 years agoVideo
2:55
Crews on-scene battling the blaze in Amherst that has left about 40 people homeless. 2:55

More than 40 people in Amherst, N.S. are homeless after a fire at their apartment complex on Sunday night.

Several buildings — including a Dooly's pool hall and an Amherst police building —were affected by the fire, which began around 10 p.m. in a four-storey building in the town's downtown.

An excavator arrived at the site Monday afternoon to knock down the building gutted by fire. Fire officials have the fire under control but remain on scene to extinguish any hot spots.

Several of the 40 tenants lost pets in the fire, others have lost important medications.

Meanwhile, the town police service is temporarily working from the local fire department because of extensive water damage within the police building.

The Canadian Red Cross is assisting those who have been put out by the fire.

Many people are currently staying at the town's temporary shelter in the Lion's Club.

Emergency officials first set up shelter at the nearby First Baptist Church, but they were forced to relocate to the Lions Club when the wind shifted, and blew smoke into the church.

"Just as a precaution for peoples' safety, because there were some that have bronchial conditions and things like that, they moved the shelter operation in the other direction," says Dan Bedell, a spokesman for the Red Cross.

Bedell says people can stay there on cots, but the Red Cross is working to find better accommodations.

"In the initial hours of the fire, there was some hope early on that people, some of them, might have been able to go back to the building, but clearly that is no longer an option," says Bedell.

"So we are working with a number of clients, some have family and friends that they can go and live with. There are a number who are clients of other agencies, like community services, and we're working with the case workers and other staff in that department and other local agencies to start identifying who needs a place to live now and what contacts we have with other landlords in the area."

Bedell says tenants will meet at the shelter Tuesday at 12 p.m. with the owner of the apartment building, who will explain the process for returning rent money and damage deposits.

He says the Red Cross is accepting financial donations. For those who want to donate items like clothing and furniture, he suggests contacting the Salvation Army to find out what's needed.

Bedell said up to 33 people stayed at the Lions Club overnight, but others stayed on the street to watch the firefighters at work. He said he hopes they register with the Red Cross.

"That allows us, and other agencies, to get a better handle on who requires what types of assistance," he said.

The Red Cross said at least one person was treated for smoke inhalation.