The father of one of the fishermen believed to have perished after their boat overturned off the coast of Nova Scotia in a storm is asking rescue teams not to give up their search for the five missing men. 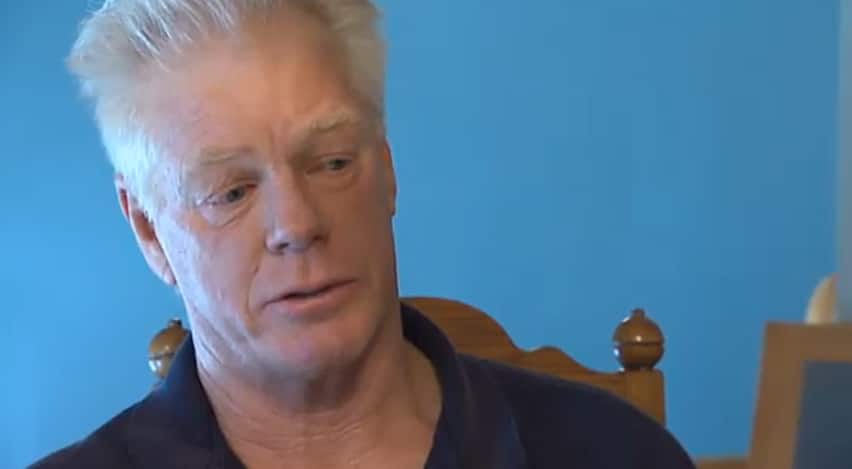 Father pleads for search to continue

8 years agoVideo
3:50
George Hopkins pleads for search officials to continue their search for his son Joel and the other four fishermen missing off Nova Scotia. 3:50

The father of one of the fishermen believed to have perished after their boat overturned off the coast of Nova Scotia in a storm is asking rescue teams not to give up their search for the five missing men.

George Hopkins, father of Joel Hopkins, said the Canadian Coast Guard has tracked the overturned ship, the Miss Ally, and he would like the 13.5-metre boat searched before it sinks to the bottom of the Atlantic Ocean.

The formal search was called off Tuesday night after officials concluded there was little hope any of the men would have survived the rough seas and cold water. RCMP are now handling it as a missing persons case.

"It was like they passed us a death certificate," said Hopkins.

Hopkins said earlier in the week that he is aware there is little hope of finding his son and the others alive.

"We need this boat to be looked at that's turned over, we need it looked at," he said. "Usually things run down to finances and why it's not being looked at maybe it's finances. I don't know, but I'm thinking that, aren't these kids important enough? I hope they are."

People in the community of Woods Harbour, where the missing men lived, are considering their options. People are mobilizing and discussing hiring a professional dive team to go out and search the vessel. If a dive team can't be hired, fishermen in the community are discussing going out to the Miss Ally themselves to search.

The names of the missing men will be added to the Fisherman's Memorial in Woods Harbour.

'We will get through this'

Residents of the community are taking it hard that the search for the men has been called off, said a Baptist pastor.

"I was with one of the family members last evening when that news came and,of course, they're broken and in very much pain," said Phil Williams, pastor of the Calvary United Baptist Church in Lower Woods Harbour.

"As one old fisherman told me yesterday — who has been through times like these himself — he said with tears running down his cheeks, 'We will get through this.'"

Williams said opinions are divided in the community on whether the search should have continued.

"I'm sure you'd have two opinions, those who wish that the search would continue indefinitely and those who come to the realization that perhaps all has been done," he told CBC News on Wednesday morning.

The military said the emergency locator beacon on the boat — which typically activates when it hits salt water — transmitted a signal on Sunday night about 120 kilometres southeast of Liverpool, as the boat was lashed by 10-metre waves and whipped by winds.

There were no distress calls broadcast from the vessel's crew before the beacon went off, said the navy.

Early Monday morning, the crew aboard a U.S. Coast Guard jet reported seeing a life-raft in the dark, but they couldn't tell if anyone was inside or where the raft came from.

Todd Nickerson, Katlin Nickerson's father, told CBC News on Wednesday morning that he wanted officials to continue searching for his son. He said he was too upset to say anything more.

'It's been really tough'

Williams said people in Woods Harbour are bringing food to the five families, and are rallying around them to provide support. He said hundreds of people have attended a prayer vigil at his small church, where five candles are flickering in honour of the fishermen.

"These boys were young and enthusiastic and were fishermen right to the core, and were only desiring to make a living," he said.

"As we look to the most senior of our population, what an inspiration they have been to me personally, just to hear their stories and how they have been through such tragedies and yet have continued on with their lives and their livelihoods."

Tina Hatfield, of Cape Sable Island, described her nephew Billy Jack Hatfield as an outgoing man who worked as a carpenter.

"Most of the young men in this community have fished since they were able to go aboard a boat," she told The Canadian Press.

"Most of the time, the young fellas go in the boat after their fathers and grandfathers."

Hatfield said her nephew, in his early 30s with three young children, was the oldest member of the crew.

Dick Crowell, harbour manager at the Harbour Authority of Cape Sable Island, said people in the community have been comforting each other since news of the tragedy spread.

"It's been really tough. Almost everybody that you talk to is connected in some way with the families and you can hear it in their voices. These sort of tragedies are never easy to handle when the families are so connected," he said Wednesday.

"It's so difficult because all you can do is stand on the shore and look seaward. Anybody who's made a living on the sea knows that when you look out to sea there are many times when the families who are ashore wonder and worry."