Tourists have come from as far away as Massachusetts to see the eagles gather in Sheffield Mills, N.S., bringing in a welcomed influx of cash to the community's businesses and fundraisers. 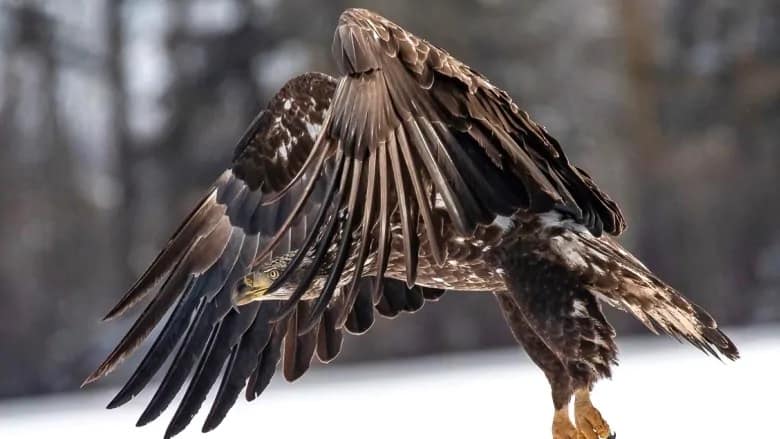 1 year agoVideo
2:16
Tourists have come from as far away as Massachusetts to see the eagles gather in Sheffield Mills, N.S., bringing in a welcomed influx of cash to the community's businesses and fundraisers. 2:16

If the eagles around Sheffield Mills could talk they would likely call Malcolm Lake the chicken man.

When Lake pulls into the open Nova Scotia field with several dead chicken carcasses in buckets, dozens of large eagles can be seen in nearby hardwood trees anxiously awaiting his arrival.

"They know my vehicle and as soon as I get up there and open my door I can hear them begin to chatter away in the trees," said Lake.

Lake collects dead chickens from several nearby poultry farms. After he throws the carcasses into the field the eagles keep their distance until Lake walks away.

Then they slowly begin to approach the dead birds in the snow, before long dozens of eagles come out of the trees to feed.

"The most I've ever counted here was 92 eagles the week before last," said Lake. "I've had up to 80 eagles here in the last seven days."

Lake feeds the eagles twice a day from late December to late March.

"It actually goes back to the '80s when the eagles were an endangered species in this county," said Lake. "Back then the Nova Scotia government asked the farmers to throw out their dead chickens to give the juvenile eagles a better chance to survive the winter, the rest of the year they fend for themselves."

Last year eagle watch saw more than 5,000 people gather in the area to witness the majestic birds perform their amazing aerial displays as they descend on the field.

Many of the visitors are amateur photographers who come from far away to see the eagles.

Ron and Jane Todd are from Framingham, Mass. They honeymooned in Nova Scotia 40 years ago and this week they drove 12 hours so they could see the eagles up close.

"You don't often see something like this, so many bald eagles," said Jane Todd. "We know we'll see something different each time."

The Todds are staying at a nearby bed and breakfast.

Eagle watch is spread out over the next two weekends and has a big economic spinoff for the area.

"Eagle watch will bring in a lot of different people to the community that we don't normally see," said Jason deGraaf, who operates a local gas bar and convenience store in nearby Canning.

"It's going to be quite a busy two weekends for us."

The eagle watch festivities include pancake breakfasts and entertainment at the local community hall.

All money raised will stay in the community.

"It's crucial for us, for our community hall, as it's our main fundraiser," said Meg Hodges, a member of the Sheffield Mills Community Association.

"It kind of keeps the lights on and the roof on and makes it available to our community, so without eagle watch we probably wouldn't have our hall."