Residents in central Halifax are questioning the police after they were abruptly forced from their homes early Friday morning and told an armed man was hiding out in a neighbouring residence, but when the police efforts came to a halt they discovered the suspect was no where to be found. 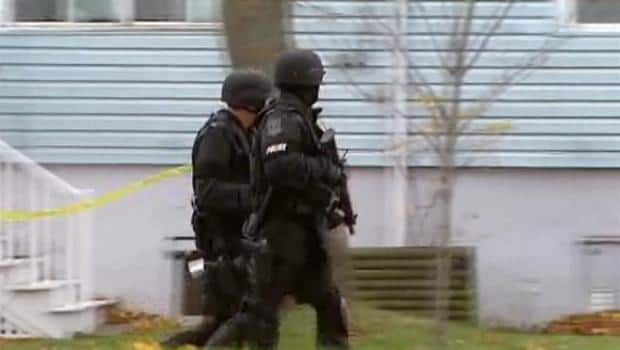 8 years agoVideo
1:13
Armed policemen did not find anyone after searching a home at the scene of a day-long incident in central Halifax. 1:13

Residents in central Halifax are questioning the police after they were abruptly forced from their homes early Friday morning and told an armed man was hiding out in a neighbouring residence.

But when the police efforts came to a halt, they discovered the suspect was nowhere to be found.

Officers on patrol then called for back up.

Many people in the neighbourhood who spent hours in the cold were asking if it was all worth it.

Bourdages said people on Compton Avenue were asked to leave voluntarily. Those who stayed home then had to call for a police escort if they wanted to leave.

A woman who lives in the area came home from working overnight at the hospital on Friday morning and said she was told she wouldn't be able to get into her house because of a "life and death" situation.

"It's a life and death situation. I can't go in my home, it's 50 feet away. Apparently every building there has been evacuated," said resident Bev Clarke.

Just after 11 a.m., a man in a white shirt and a woman in a wheelchair were escorted out of a house at 6024 Compton Ave. and taken to waiting police vans.

"A man and a woman were taken into custody by police from the residence in question. However, investigators have yet to determine their connection to the original incident involving a firearm," Halifax Regional Police said in a statement.

For several hours, police believed a third person was inside and and possibly armed.

Dozens of armed police officers moved into the home and combed the house, floor by floor. Thirty minutes later they emerged empty handed.

"I'm not saying that the individual has left the residence. We're still trying to determine if the person that we took in custody this morning, were the persons observed earlier by the patrol man. Obviously, there will be more investigation being done on this incident," said Bourdages.

"We do believe there are weapons inside the residence."

The scene has been transferred to the general investigative section so they can execute a warrant.

Several roads near Robie Street were closed for over six hours.

According to provincial property records, 6024 Compton Ave. is owned by Brenda Leanne Young, who received it in 2005 when her mother died.

In 2007, Young took out a mortgage under the name Brenda Leanne Hudder, along with Joseph Ralph Hudder.