Dozens of civil servant jobs moved out of Halifax

The Nova Scotia government is moving dozens of civil servant jobs out of Halifax and to rural areas of the province.

Premier says more departments could decentralize in the future 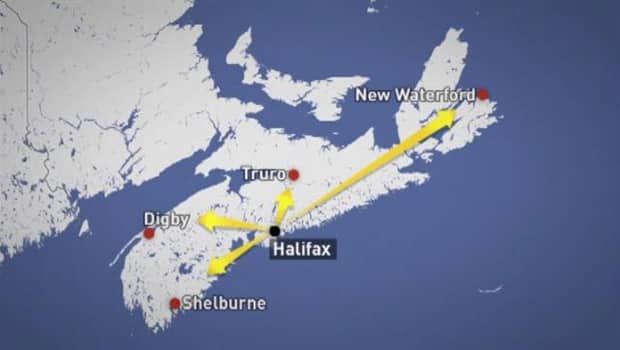 Provincial Jobs on the Move

The Nova Scotia government is moving dozens of civil servant jobs out of Halifax as it decentralizes some departments.

The New Democrats rolled out their plans on Monday, saying good jobs were going to Cape Breton, Truro and southwest Nova Scotia.

The Department of Agriculture head office is moving to Truro-Bible Hill, which means the relocation of 34 positions. One hundred and forty-one workers are already there.

The Justice Department is consolidating the maintenance enforcement program in New Waterford. Eleven of those positions are being transferred from Sydney, while another 25 are coming from mainland locations.

Is your job being moved? Do you know someone affected by these relocation plans? Email us your story at cbcns@cbc.ca.

Twenty-two fisheries jobs are heading to the Digby-Clementsport area, while 12 aquaculture positions are going to Shelburne County.

Premier Darrell Dexter said the relocation plan won't cost taxpayers over the long run because the price for moving employees will be offset by lower rents and reduced travel.

He said the government is looking at moving more jobs out of the capital city in the future.

"As departments become consolidated, as there are new functions of government that need to be carried out to look to for where they would be most appropriately located. Is this it for now? Yes. Are there going to be other opportunities for further devolvement? We think so," Dexter said.

Deputy Premier Frank Corbett announced the move to New Waterford in his own riding. He said it should be completed by the end of March, 2013.

Maintenance enforcement looks after collecting court-ordered child and spousal support payments. Corbett said it makes sense to manage all of it under one roof.

"It works well from a training perspective, it can be delivered in a consistent manner," he said.

Several provincial employees told CBC News they were told not to comment on their upcoming moves.

Joan Jessome, the president of the Nova Scotia Government Employees Union, said her members are upset by the announcement.

"They have established their homes and their families and their lifestyle. They have partners that are working that don't get transferred, so it's not all rosy," she said.

Jessome said the province should focus on creating jobs, rather than disrupting the lives of its current employees.

The government says no one will be forced to relocate.

Employees have until June 20 to decide if they want to relocate or try to find another government position.

The plan to decentralize jobs was first announced in the throne speech.