She was too afraid to testify at her ex's domestic abuse trial. She was jailed instead

Serrece Winter says she was so afraid of her partner that she didn’t show up in court to testify against him on domestic violence-related charges. A few hours later, Halifax Regional Police had an arrest warrant and jailed her. When she smashed her head against the wall of her cell, officers strapped her to a restraint chair. Now she’s charged with assault.

Serrece Winter was arrested, strapped to a restraint chair and charged with assaulting a peace officer

When Serrece Winter found herself locked up in a jail cell at Halifax Regional Police headquarters, she sat on the metal bench, leaned back against the bars and thought about dying.

Then she turned toward the concrete wall and started hitting her head against it.

She banged her head about 36 times — at times pulling her head back and smashing it into the wall  — until she finally stopped.

She was jailed Nov. 20, 2019, because earlier that afternoon she had failed to show up in court to testify against her on-again, off-again boyfriend for allegedly assaulting her.

Winter had been at home drinking beer since the morning to find the courage to testify as the main witness against the man she feared.

When she didn't show, the Crown attorney requested a warrant for her arrest to bring her to court. The warrant was granted by a judge.

The self-harm was the result of utter despair and a mental breakdown, Winter told CBC News in an exclusive interview.

"I'm cold, I'm depressed, I'm thinking about death because at this point, it seems like nobody in the system cared that my life was in danger or how this was affecting me," said Winter, recalling that day at police headquarters.

"I was really hoping to crack my head open so that I would die and then it would be over, and I wouldn't have to worry about being threatened.

"I don't want to die at the hands of some psycho guy."

The scene inside the police cell, the conversation that preceded it and what followed afterward were captured on surveillance video and viewed by CBC News.

Seven officers, six of whom are male, are on hand as Winter is strapped to a restraint chair. Two officers cover her mouth and chin with their hands.

At the time, Winter's then-boyfriend was facing 14 charges, including choking, assault causing bodily harm, assault, unlawful confinement, mischief, and failing to comply with a recognizance for alleged incidents between February 2019 and September 2019.

Those charges were dropped last Friday after Winter indicated she would not testify and the Crown determined there was no realistic prospect of conviction, said a spokesperson for the Public Prosecution Service.

A peace bond is in place ordering Winter's ex to keep his distance and not contact her for one year.

'They put the victim in jail'

Winter's act of self-harm in her cell nearly a year ago followed a five-minute exchange in the booking area in which she told two officers that as a domestic violence complainant, she didn't belong there.

"They put the victim in jail," she can be heard telling two officers in the video.

Her voice grows louder as she argues her imprisonment is unjust.

"I didn't commit a crime. He did. He assaulted me," she pleads.

The officer replies: "If you had shown up [at court] at 1:30 today, I already told you, you wouldn't have been arrested." 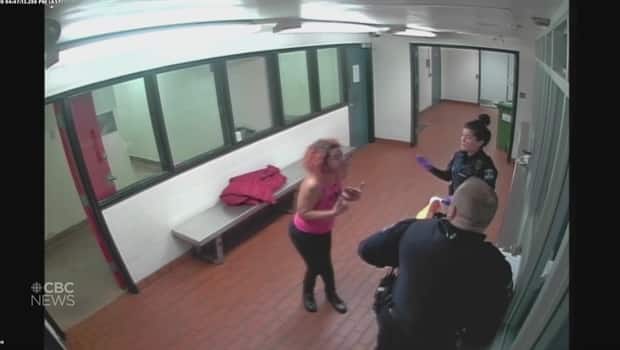 3 months agoVideo
8:03
(Warning: This video contains disturbing content) Surveillance cameras inside Halifax Regional Police headquarters show the conversation Serrece Winter had with officers before she was put in a jail cell, what happened inside the cell and how she was subsequently placed in a restraint chair. 8:03

Winter has a history of being assaulted by partners.

In 2015, she entered the province's high-risk case co-ordination program, which monitors women who are at the highest risk of being murdered by a partner and follows her as she enters new relationships.

Winter told CBC News she had made numerous calls to authorities that she was afraid to testify against her then-boyfriend. Her last communication with the Crown's office was before attorneys went on strike in late October, she said.

Ordered to sit down

When officers tell her to quiet down, Winter explains in the video that she's afraid of being in lockup. She's asked if she has any health problems, to which she replies that she's "crazy."

"I don't think that's a medical condition," says an officer.

"Well, my doctor disagrees," Winter says, listing PTSD and bipolar disorder as her conditions, along with her medications.

The conversation turns into shouting when Winter asks if she can stand up. One officer orders Winter four times to sit down.

"I'm not hurting you, I'm not doing anything bad," Winter yells, her arms stretched out in disbelief.

As soon as Winter sits down, she's sent to her cell.

At no time in the booking area is she advised of her right to call a lawyer or offered medical assistance.

After banging her head repeatedly against the cell wall, she stops and clutches her body.

Moments later, an officer wheels a restraint chair that's covered in straps next to her cell. The chair is used to stop Winter from self-harm, according to the officer's notes.

Three officers grab a struggling Winter and pull her from the cell. She thrashes about on the floor as they hold her limbs and pull her coat off.

The male officers throw her onto the chair. One yanks her hair and holds her by the chin to pin her head back. The other officer places his gloved hand over her mouth.

For a few seconds, both men each have a hand on her mouth as straps are tightened around her wrists, shoulders and ankles to immobilize her.

It was a "big reminder" of allegedly being choked and confined by her partner, said Winter.

The video shows Winter being wheeled into the drunk tank, where she is left for about an hour and checked later by paramedics.

The self-harm and the restraint left her with bruising, but no serious physical injuries.

The emotional scars, however, persist nearly a year later. Winter said she feels defeated by her former partner, thanks to the justice system.

What unfolded at police headquarters is coming to light because Winter is defending herself against an assault charge for allegedly kicking a booking officer's leg during the ordeal.

On Monday, her trial was scheduled for June 14. Winter's legal aid lawyer, Tony Amoud, is attempting to have the charge thrown out.

"This was her reacting to the excessive force that the police displayed that day," he said in an interview.

He intends to argue that Winter's charter rights to a lawyer, her right to security and freedom, and her right to be treated equally were breached.

"This is not someone being arrested for an alleged crime," he said.

He contends that if Winter had been able to talk to a lawyer right away to understand why she was in custody, the situation would not have escalated.

Amoud said officers showed a "lack of sensitivity" toward a woman who was alleging domestic violence and didn't show up in court out of fear.

He described Winter as being "upset, she's hurt, she's scared," but not belligerent or violent.

"What makes it even more upsetting is that she tells them that she has mental health issues," said Amoud, who believes police should have used a trauma-informed approach in communicating with Winter.

He believes his client's mental health, coupled with being part Black and part Indigenous, resulted in her concerns not being taken seriously by officers and underscores systemic racism within the justice system.

Warrant 'not intended to punish'

The issue of domestic violence victims who fail to appear in court is dealt with in Public Prosecution Service policy.

An adjournment is listed as the first option. Asking for a warrant is possible, but it should be held to determine why the victim failed to appear.

A spokesperson for the Public Prosecution Service said the prosecutor "acted appropriately in accordance with our policy on spousal/partner violence" in requesting an arrest warrant.

Chris Hansen said a victim services worker provided Winter with support prior to the trial. The Crown also met with Winter to prepare her to testify, said Hansen.

"The Crown also took steps to apply for a witness screen to be placed between Ms. Winter and the accused during Ms. Winter's testimony. But Ms. Winter said she did not need it," Hansen said in an email to CBC News.

Hansen did not indicate whether the assault charge against Winter would go ahead, but said "the Crown continually assesses each prosecution always weighing the realistic prospect of conviction and public interest."

In a statement, a Halifax Regional Police spokesperson said there would be no comment on the specifics of this case as it is before the courts.

However, Const. John MacLeod said "the determination of whether the police are authorized to release someone or are required to hold them is determined by the endorsement placed on the warrant by the judiciary."

A spokesperson for the judiciary said the Criminal Code requires a police officer to arrest the person to bring them before a judge to testify.

The experience has left Winter without faith in the Crown.

"At this point, I see the Crown attorney as the enemy," she said. "Nobody addressed the very real fear I had of being assaulted or murdered if I testified."

Amoud is expected in court Monday on Winter's behalf to represent her on the assault charge. Dates are expected to be set for her trial and a hearing to argue her charter challenge.

Winter's ex-boyfriend, meantime, is due in court next month on five new charges, including choking and uttering threats, after an alleged incident involving Winter on Dec. 10, 2019 — not quite three weeks after that day at police headquarters.

Winter said this time, she'll be in court to testify. But she no longer feels protected by the police.

"I already feel like they've proven that I'm less of a human being to them," she said. "That my life didn't matter, and doesn't matter to those that's in the system."

Elizabeth Chiu is a reporter in Nova Scotia and hosts Atlantic Tonight on Saturdays at 7 p.m., 7:30 p.m. in Newfoundland. If you have a story idea for her, contact her at elizabeth.chiu@cbc.ca.