N.S. woman was killed by her own dog while taking it for a walk, RCMP say

One person is dead in what police say was an attack by a dog on its owner. The dog then went on the loose Tuesday morning, prompting RCMP to warn area residents to stay inside, but the animal was later struck and killed by a passing car.

Dog went missing after fatal attack, but police later learned it was struck and killed by a car 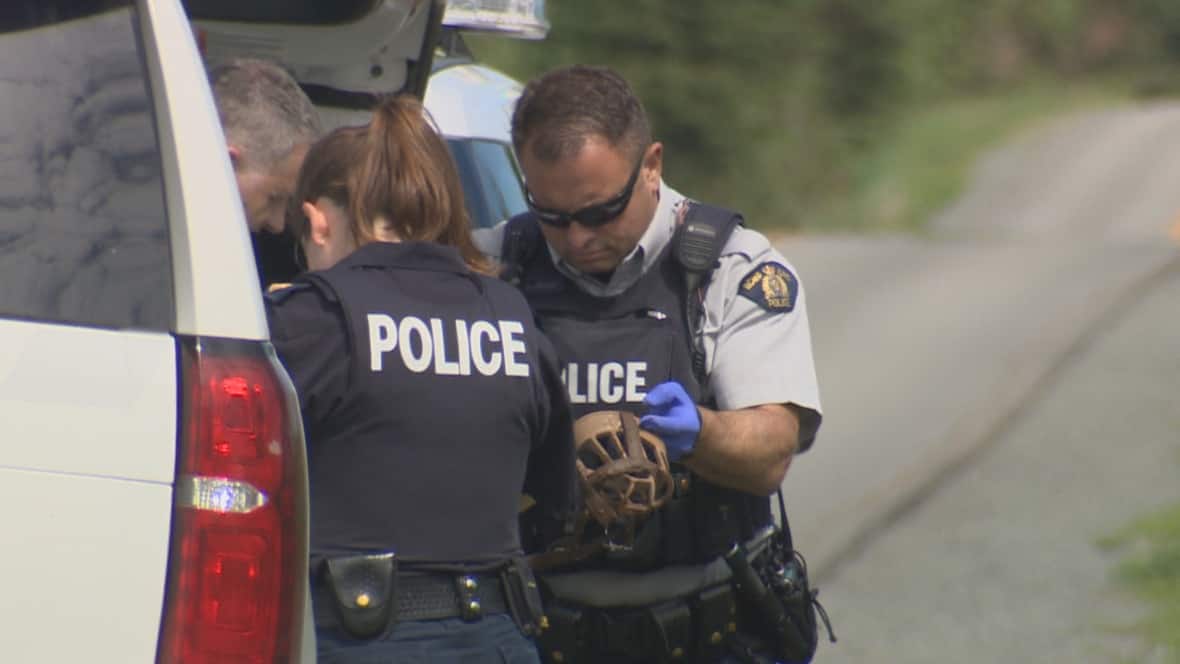 N.S. woman was killed by her own dog while taking it for a walk, RCMP say

5 months ago
2:31
One person is dead in what police say was an attack by a dog on its owner. The dog then went on the loose Tuesday morning, prompting RCMP to warn area residents to stay inside, but the animal was later struck and killed by a passing car. 2:31

A Nova Scotia woman was killed by her own dog while taking it for a walk on Tuesday morning, prompting RCMP to publicly warn area residents to stay inside before the animal was confirmed killed after it ran away.

The name and age of the victim have not been released. According to police, the dog later died after being hit by a vehicle in the rural community of Middle Musquodoboit, about 70 kilometres northeast of Halifax.

Jocelyn Parker said she was one of the people who discovered the body of the woman just after 8 a.m. local time, when she was flagged down by a teenage jogger on the side of Wittenburg Road, a few kilometres from her home.

There was a large muscular dog in the middle of the road, she said, and the jogger told her she had found a dead body in a nearby ditch.

"We both just kind of looked at her from the side of the road, and her injuries were rather extensive and it was very apparent she had passed away," said Parker.

The dog, which had been acting skittishly, ran down a nearby dirt road, Parker said. She and the jogger called 911.

The jogger told Parker that she had passed the woman and the dog sitting on the side of the road 15 minutes earlier. When the jogger returned, she found the woman in the ditch and the dog standing near her.

"What transpired in that 10 or 15 minutes, we don't know. Only her and the dog will know," said Parker. "We believed that the dog had attacked her based on the type of her injuries."

RCMP officers who met them at the scene agreed the woman was attacked by the dog, said Parker. A short time later they sent out an alert via Twitter warning people about what it described as a "pitbull." They asked people to stay inside and not to approach the dog.

At about 9:30 a.m., police were notified that the dog was struck and killed by a passing car near Highway 224. Police later confirmed in a news release that the woman was walking her dog when it attacked her.

Parker said people in the community are shocked by the idea of a dog killing its owner.

"A lot of people are, like, 2020 can just leave right now, on a lighter note," Parker said. "But I just feel really bad that, yeah, at an already really difficult time, somebody's family is going to be getting more horrible news today, unfortunately. I feel really bad for her."

An area councillor, Steve Streatch, said he couldn't identify the victim but understood that it was the woman who owned the dog who died after "some type of attack."

"To hear something like this this morning was just heart-wrenching, and our thoughts go out to the victim's family and they are in our hearts today," Streatch said Tuesday.

When asked about what people should keep in mind about RCMP describing the dog involved as a pitbull, Streatch said it's "easy to blame a breed," an owner or the training of an animal.

"I don't know the situation," he said.

"All I do know is a person has lost their life today, a young woman who was part of our community. And it is very, very unfortunate and very tragic, and I await the results of the police investigation."

Streatch said this tragedy, following others in Nova Scotia in recent months including the mass shooting, and death of military members in both a Cyclone helicopter and Snowbird jet crashes, have all tested the "resolve" and character of people across the province.

The Musquodoboit Valley is a quiet, rural area where "everybody knows everybody," and that can make incidents like this even more difficult, Streatch said.

"It's definitely been a challenge, and a lot of folks are reflecting not only on this incident but indeed incidents over the last couple of months. But we're strong people and will continue to persevere."

With files from Paul Palmeter