Premier Darrell Dexter is confident the province's near $125-million investment can help turn around a failed paper mill in Cape Breton. 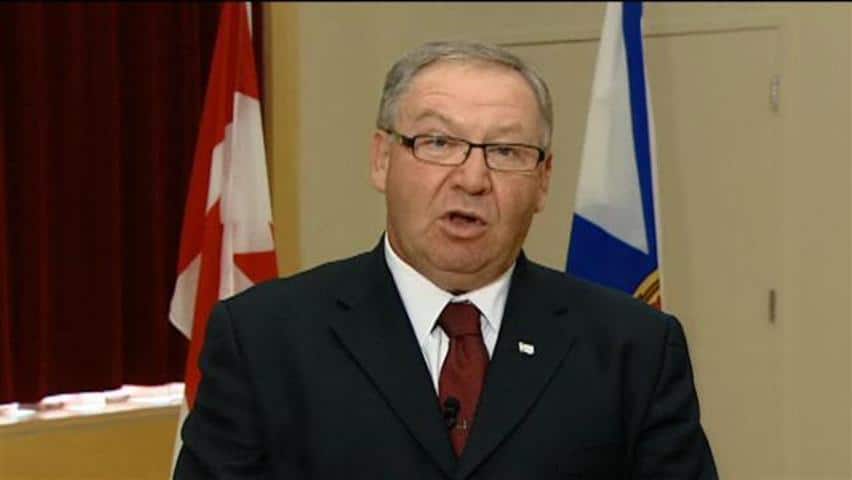 8 years agoVideo
5:21
Premier Darrell Dexter speaks to the CBC's Tom Murphy on the province's decision to grant a near $125-million package to the British Columbia company that bought the former NewPage mill. 5:21

Premier Darrell Dexter is confident the province's near $125-million investment can help turn around a failed paper mill in Cape Breton.

"We are confident that Pacific West is well-positioned to be the most competitive and best supercalender paper mill in the world," Dexter told a news conference in Port Hawkesbury.

Under the deal, the provincial government is offering Pacific West Commercial financial incentives including $66.5 million in loans, $26.5 million of which could be forgiven if the Vancouver company meets certain criteria.

The government has also agreed to buy about 20,840 hectares of land from NewPage Port Hawkesbury for $20 million. That money would go to the mill's creditors.

It would also give Pacific West Commercial $3.8 million annually for 10 years to support forest land management and sustainable harvesting.

The sale also includes a plan by Pacific West to write off close to $1-billion in debt accumulated by NewPage.

The provincial regulator has approved another facet of the plan, which would see Pacific West pay a reduced rate for electricity, in return for dividends to Nova Scotia Power.

The debt plan and the power rate agreement still require approval from the Canada Revenue Agency.

"That is the key, the CRA has to agree," said Dr. David Stuewe, Dalhousie professor in the School of Public Administration.

"In business there are losses and there are profits. And if you can write off your loss against a profitable industry and benefit the country which is trying to develop this biomass system, that we have here, to bring electrical costs down, then it's a benefit to all Canadians."

"It is unique in the electricity industry, for sure, to see these losses being used to protect the rate, it is not unique in the general industry at all," he said.

Dexter says it's a 'good day'

In an interview with CBC News, Dexter called this "a good day for Port Hawkesbury, I also think it's a really good day for the province."

Dexter said the power deal allotted to the mill is a special case and is not worried about setting a precedent for other struggling industries.

"Everyone knows that this is a very specific operating case for this particular mill," said Dexter.

He said though there is no guarantee the near $125-million provincial investment will lead to success at the mill, he is confident that the repositioned mill will be able to be competative.

"There's no question that paper markets are volatile, you have to depend on the expert advice that you get. We know we have the best technology anywhere in the world, we know that we have a highly professional, well-trained workforce, we've got a great natural resource, we have repositioned the forestry sector to take best advantage of that and, in the end, the mill will have to compete in the international market," said Dexter.

"We weren't here and aren't here to subsidize the ongoing operation of the paper mill, we're here to reposition it to be a profitable part of the economy of this area of the province for years to come."

Dexter said he thinks that NS Power rate payers in the province will be better off as a result of the power deal for the former NewPage mill.

"What this means to the economy of this province, if you think about it in these terms, it's about two per cent of the GDP of the province. It would be about $160 million annually into the local economy, it's $11 million in tax revenue, tax revenue which goes to build hospitals, schools, roads in every part of the province. So there's a real desire to ensure this mill remains economically sustainable for the long term."

Dexter went on to say that the business case for the mill has been examined by experts within the industry and the financial community who say this is a good long-term investment for the province.

The mayor of Port Hawkesbury, Billy Joe MacLean, said the finalized power deal and support from the province is a huge relief for the community.

"I would like to mention the anxiety of the pensioners, of the small business people, the people that have been unemployed for 12 months, the impact of this mill closing in eastern Nova Scotia and I'm talking for hundreds of miles," said MacLean.

"I've talked to business people, their sales are down 30, 40 per cent. This is the lifeblood of our island and our province of Nova Scotia," he said. "This is a special mill with special equipment but we also have a special company, Pacific West, that have integrity and management skills never matched in eastern Nova Scotia."

The mill shut down last September, laying off some 600 employees and affecting another 400 forestry contractors. It opened in 1962.

Pacific West has said it plans to operate the mill at about half capacity.